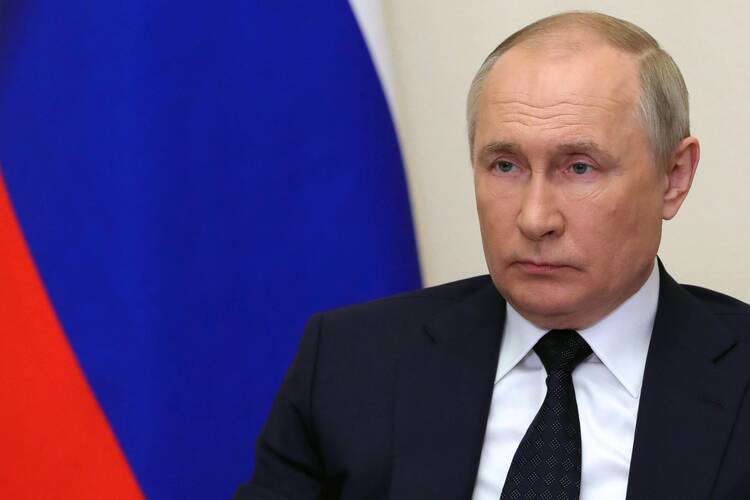 Thousands of miles away from Eastern Europe, Latin American Catholics have been following the Russian invasion of Ukraine with a sense of solidarity for refugees and the victims of conflict and a belief that the military operation must stop immediately to curtail more suffering.

And despite strong Russian influence in Latin America—President Vladimir Putin has close ties with many local leaders, and trade between the region and Russia is significant—in countries like Brazil and Colombia the mainstream press has been deeply critical of the Kremlin.

But while the United States and Europe have quickly elevated Mr. Putin to the role of primary wrongdoer in this global drama, many leading Catholic theorists in Latin America are not willing to promote a simple vilification of the Russian side as they seek to understand the suffering in Ukraine. Political philosophers and clergy members associated with liberation theology, once a potent Catholic school of thought in Latin America, have been emphasizing the need to look beyond easy narratives to understand the deep reasons behind the conflict, connecting them to related political phenomena in play in Latin America.

Not a Western movie

Spanish-born Victor Codina, S.J., a longtime liberation theologian who lived for almost 40 years in Bolivia, is one of them. On Jan. 31, as it became clear that Mr. Putin would send his troops to Ukraine, Father Codina criticized the imminent use of violence in an essay in Spanish-language media that included excerpts from Pope Francis’ encyclical “Fratelli Tutti.”

“What I clearly see is that this war is not like Western movies, in which there are good guys and bad guys: Putin’s attitude is criminal, but the West and NATO are not innocent,” he told America.

While the U.S. and Europe have quickly elevated Putin to the role of primary wrongdoer, many leading Catholic theorists in Latin America are not willing to promote a simple vilification of the Russian side.

Father Codina stressed that the conflict should have been solved a long time ago through dialogue and nonviolent means, but it has “very important economic motivations.”

“The only ones who have something to gain are the gun manufacturers,” he said.

He noted that resources directed to military spending and squandered in war-making “could help poor countries.” But such concerns seem not to matter anymore to the “great world powers.”

In general, liberation theology theorists who described their views about the invasion to America focused on the economic aspect of war-making, critical of Mr. Putin’s decision to invade Ukraine but unwilling to lay the blame for the conflict on Mr. Putin alone.

“We are producing war guns in order to make money. And how can we make more money? With more wars,” Ivone Gebara, C.R.S.A., of Brazil, said. Global leaders do not seem willing “to change such logic,” she added.

“The only ones who have something to gain are the gun manufacturers.”

A feminist theologian who had once been silenced by the Vatican because of her views on abortion, Sister Gebara described the war as a “male-centered spectacle of death.” She said there were no heroes among the great leaders acting in this conflict.

“The attempt to transform some of them into saviors and some into sinners is an effort to portray the war as a Hollywoodian drama,” she said. “But the real rescuers are the women, who have been taking care of the elderly people and the children.

“Such a domestic salvation—the fact that women are improvising small places of care, schools for the refugees’ children, and are taking care of the collective survival—does not seem to attract the attention of the destroyers of lives who are engaging in war,” she added.

These liberation theologians were quick to draw attention to the contrast between the way the conflict in Ukraine has been responded to by politicians and media around the world and the manner in which wars in Africa and in the Middle East have been treated.

“I see a great disproportion in the political, economic and media reaction to [Ukraine] and to the wars in Syria, Yemen, Afghanistan, African countries, Israel’s aggressiveness against Palestine, etc.,” Father Codina said.

“Why is Switzerland not freezing the assets of other dictators?” he asked.

“I see a great disproportion in the political, economic and media reaction to [Ukraine] and to the wars in Syria, Yemen, Afghanistan, African countries, Israel’s aggressiveness against Palestine, etc.”

Jorge Costadoat, S.J., a professor at the Pontifical Catholic University of Chile, said that Mr. Putin’s unprovoked invasion of Ukraine is a violation of international law, something “as serious as the 2003 attacks of the United States against Iraq.”

“Everybody now demonizes Putin, but the United States did the same thing back then,” Father Costadoat said.

In Father Costadoat’s view, the current conflict is a consequence of major geopolitical shifts emerging out of the conclusion of the Cold War that went unresolved for too long.

“The end of the Cold War generated a complex geopolitical situation,” he said. “The victorious bloc should have established the necessary order since then, and I do not know that it did so.

“To simply condemn Putin as if he were a devil will not bring any solution,” Father Costadoat added.

The German-born theologian Paulo Suess, a major liberation theology thinker in Brazil specializing in missiology, has spent decades working with Indigenous groups. He also declined to speak of the conflict in terms of the personal morality of the leaders involved.

“I am not saying anything about their character or their moral qualities,” he told America. “What I am worried about is a humanitarian solution that can be negotiated.”

“Heroism will lead to more deaths. How many lives can be spared if both parties give in and negotiate?”

He observed that justice cannot be achieved at this point of the conflict, but any kind of “common sense should prevail to avoid more deaths.”

“Heroism will lead to more deaths. How many lives can be spared if both parties give in and negotiate?” he asked.

Father Suess suggested that Ukraine’s intention to join NATO should be reconsidered, at least for some years. “They have to negotiate with Putin, despite all problems and risks involved, to save lives,” he said.

Living in the past?

The views expressed by many in the Latin American left are connected to the Latin American experience of the 1960s, when the United States directly or indirectly collaborated with right-wing military regimes in the region, according to Francisco Borba Ribeiro Neto, the director of the Pontifical Catholic University’s Faith and Culture Center.

“Even today, young liberation theologians still live somehow in that era,” Mr. Ribeiro Neto said. He considers liberation theology to be a school of thought from the past. The fact that part of the Latin American Left is not overtly critical of Mr. Putin’s actions is something he compared to its traditional defense of Communist dictatorships.

“For them, dictators were not responsible for their atrocities; [the atrocities] were in fact the result of the pressure exerted by Western democracies and counter-revolutionary forces against the implementation of socialism,” he said. “It is the same logic.”

Despite the silence of some on the left, he emphasized that the Brazilian Catholic Church, even its progressive wing, does not support Mr. Putin’s military actions.

“In Latin America, colonization has been the major element of our formation. That is why we tend to be critical of the West.”

“The hegemonic position among Catholics in Brazil is the same as Pope Francis, who considers the war a human failure and blames Putin for the invasion, even if the act of blaming him is not always verbalized,” he said.

“In a way, Putin is not condemned more often by the Brazilian Catholics simply because his guilt is considered obvious,” he added.

The Korean-born Catholic theologian Jung Mo Sung, a religion studies professor at the Methodist University of São Paulo and a liberation theology thinker, argued that it is not advisable to analyze an event of such magnitude through personal “moral lenses.”

Mr. Sung argued that understanding the reasons for the war does not involve taking sides.

“I am against Putin’s actions the same way I am against NATO’s move. Putin’s invasion of Ukraine is a condemnable act and NATO’s intention of encircling Russia is also condemnable,” he said.

"There are no innocents [among political leaders] in a situation like that,” he said. “Equally, there is no devil either. When you demonize your opponent, you are assuming that war is a necessity, that killing is a necessity,” he told America.

Mr. Sung added that Mr. Putin should not be seen as “a madman,” given that he has a particular rationality.

“I am against Putin’s actions the same way I am against NATO’s move. Putin’s invasion of Ukraine is a condemnable act and NATO’s intention of encircling Russia is also condemnable.”

“The Western thinking is too hasty. Putin has been preparing his move for years,” he said. “He wants to recuperate ‘Mother Russia.’”

A wild beast, like a wolf or a bear, should not be cornered because it gets even more ferocious, he said. “NATO’s expansion in the region was a form of cornering Russia,” he reasoned.

Regarding the opinions of liberation theologians in Latin America, Mr. Sung explained that the “interpretation of reality varies according to the cultural tradition.”

“In Latin America, colonization has been the major element of our formation,” he said. “That is why we tend to be critical of the West.”

The Latin American left has repudiated the globalization of the market economy, long promoted by the Western powers. “So, for many, Latin America’s experience has not been one of seeing Russia as the enemy, but the West. This influences the way many are seeing the conflict now,” he said.

Other liberation theologians were reluctant to comment more on the Russian invasion. Father Costadoat offered an explanation. “Liberation theology is not a system of thought that can give answers to every event in human history,” he said. “It is based on a scientific knowledge of reality. One needs to listen to the voices of those who really know the matter, including sociologists and economists.”

He added, “I doubt that anyone in Latin America has a profound knowledge of the Ukrainian situation, given that we have a great cultural distance from it.”

But Sister Gebara pointed out that Latin America is already feeling the impacts of the conflict, so its causes and effects will ultimately demand greater moral and political scrutiny, especially “given that all the world powers are involved in the conflict.” She said Latin America will be unable to completely escape its consequences.

“The region imports a great part of its fertilizer from East Europe and problems are already emerging,” she said. The conflict will just as surely take an emotional toll on Latin Americans, who “are watching a televised war every day,” a draining spectacle that appalls on a number of levels. But Sister Gebara also called the conflict “a reproduction of all wars that we daily face in poor neighborhoods and favelas that do not appear on TV.”