The Plight of Ukraine’s Women 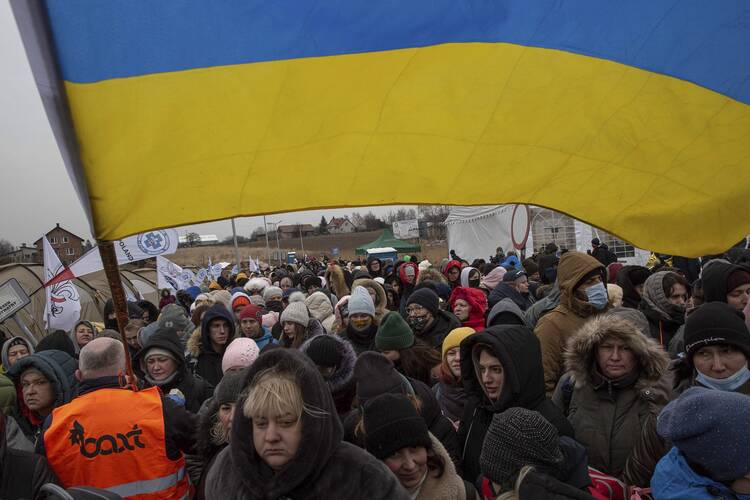 A Ukrainian volunteer Oleksandr Osetynskyi, 44 holds a Ukrainian flag and directs hundreds of refugees after fleeing from the Ukraine and arriving at the border crossing in Medyka, Poland, Monday, March 7, 2022. (AP Photo/Visar Kryeziu)

Filippo Grandi, the United Nations High Commissioner for Refugees, calls it the “fastest growing refugee crisis in Europe since World War II”: More than 2 million people have scattered into nations around Ukraine since the Russian invasion began on Feb. 24.

Those numbers are sure to increase in the coming weeks. The Russian Federation, stymied in direct combat with Ukrainian forces, has increasingly turned its guns on civilian targets and infrastructure. Despite several attempts to establish cease-fires and humanitarian corridors to evacuate noncombatants, as the war completes a second week, there is little sign that the flight out of Ukraine or the violence that is propelling it will diminish anytime soon.

As they escape from the war, refugees will face different threats. The escalating scale of the crisis has left responders at the border struggling to keep up. Tracking new arrivals has been especially challenging. More than 1.2 million have fled into Poland; a vigorous response is being joined there and in other border nations by a number of Catholic humanitarian relief organizations, including Catholic Relief Services, Caritas, Jesuit Refugee Service and Malteser International.

“As we celebrate the strength of women around the world, we’re also seeing women struggle in such heartbreaking ways, trying to keep their families safe, serving the youngest and most vulnerable.”

About 1 million of the refugees so far, according to U.N. reports, are children, and most of the rest are women—the mothers, grandmothers and older sisters who are accompanying exhausted children into exile.

There is a “particular poignancy” in watching Ukrainian women transformed by war into refugees on International Women’s Day, said Joan Rosenhauer, the executive director of Jesuit Refugee Service/USA. “As we celebrate the strength of women around the world and the roles of women around the world, we’re also seeing women struggle in such heartbreaking ways, trying to keep their families safe…serving the youngest and most vulnerable and the oldest and most vulnerable.”

As is true in many other crises and conflicts that cause vast population displacement, “women and girls are at high risk for human trafficking or being taken advantage of,” she said. “Our colleagues in Europe are calling on local authorities and states to be vigilant and ensure the protection of women and girls fleeing from Ukraine.”

Women refugees this time are especially vulnerable, Ms. Rosenhauer said, because so many Ukrainian men are remaining behind to sign up for military service or to join the territorial defense forces. Under Ukraine’s declaration of martial law, men between the ages of 18 to 60 are barred from crossing the border to join their families as refugees.

“The fact that there is a very intentional discussion and direction for men to stay and fight means that there’s an even greater situation involving women taking the lead, getting family members out, whether it’s vulnerable children or vulnerable elderly, and having to manage in a new place with almost nothing,” Ms. Rosenhauer said.

The escalating scale of the Ukraine refugee crisis has left responders at the border struggling to keep up. Tracking new arrivals has been especially challenging.

In the coming weeks, the office of the U.N. High Commissioner for Refugees predicts that as many as 4 million Ukrainians will become refugees, double the current number. U.N. officials also warn that displaced women and girls forced to live in temporary or shared shelters and “the increased military presence” in Ukraine have created a heightened risk of gender-based violence.

Many women have elected to stay in Ukraine and assist the resistance; many have taken up arms themselves. The U.N. estimates that 12 million people inside Ukraine will need relief and protection as the war grinds on. U.N.H.C.R. has called for the protection of civilians and civilian infrastructure, as well as respect for international humanitarian law, and it has appealed to neighboring countries to keep their borders open to those fleeing the conflict.

According to Ms. Rosenhauer, JRS colleagues in Poland report a significant number of women and children are coming across the border “with the full range of needs that one would have in that situation—shelter, food, clothing—because they could bring very little with them.” Medicine, phones and SIM cards are other acute needs.

Among JRS priorities are mental health and psychosocial support, according to Ms. Rosenhauer.

“We’ve all seen the heartbreak that people are experiencing,” she said. “We can’t assume that if we just provide the shelter and the food and the clothing that people will be fine. As they always do when they’re forced to flee their homes, people need mental health and psychosocial support, and that’s something we’re especially focusing on.”