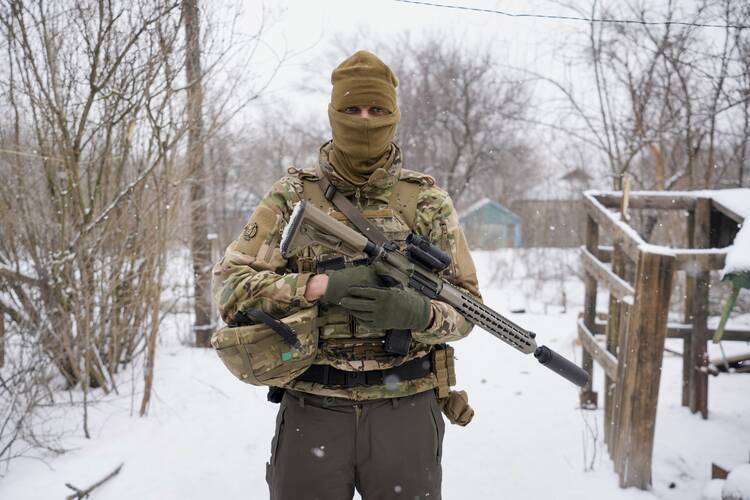 A Ukrainian sniper on the front line in the Luhansk region, eastern Ukraine, on Jan. 28, 2022. (AP Photo/Vadim Ghirda)

For other perspectives on the Ukraine crisis, read “10 ways to avoid a devastating war in Ukraine” and “Just war theory and Ukraine: Why military action against Russia is justifiable.”

A full-scale Russian invasion of Ukraine seems imminent, but nobody really wins if this happens. The global economic and food security impacts would fall disproportionately on the most vulnerable. Catholic concern for the common good and just war principles require us to look for a diplomatic solution that might avert the evils such a conflict would unleash. In particular, a personal intervention by Pope Francis may be our last hope for successful negotiations to preserve peace.

Notably, Pope Francis writes in “Fratelli Tutti” that “it is very difficult nowadays to invoke the rational criteria elaborated in earlier centuries to speak of the possibility of a ‘Just War’” (No. 258), in part because of the destructive power of modern weapons. However, this does not mean contemporary Catholic ethics calls for unqualified pacifism; the just war framework allows leaders to judge whether military action is reasonable in light of traditional principles and pragmatic considerations.

A personal intervention by Pope Francis may be our last hope for successful negotiations to preserve peace.

The Catechism of the Catholic Church summarizes the traditional criteria for the use of force: In order to argue that a war is just, it must meet the standards of both jus ad bellum and jus in bello: the “right to fight” and the duty “to fight right.” In light of recent wars that have descended into failed nation-building and interminable guerrilla warfare, scholars have argued for the addition of a third category: a clear-eyed jus post bellum analysis of the post-war environment would ensure a coherent exit plan and a realistic assessment of worst-case risks and costs.

In his recent Short Take in America, John Davenport of Fordham University rightly argues that the just war tradition does not allow wars of conquest but does allow the use of force to reverse unjust aggression, like Russia’s moves against Ukraine. He goes on to argue that U.S. President Joseph R. Biden Jr. should take three steps in dealing with the crisis. First, Mr. Biden should make clear that barring Ukraine from NATO membership is unthinkable. Second, he should pressure Russian President Vladimir Putin to withdraw his forces by threatening to expedite Ukraine’s NATO membership (something of a mirage, since Ukraine is far frommeeting the criteria for entry and every existing member of the alliance has a veto), as well as by sending lethal aid. Finally, Mr. Biden should signal that the United States and its European allies are prepared to go to war to repel any further invasion of Ukraine.

President Biden has been clear that he does not intend to escalate a Russian invasion of Ukraine into a global conflict. He calculates that such action would likely produce negative consequences disproportionate to those it attempts to eliminate. Still, it is difficult to deter a major power with the threat of sanctions alone, and taking any military response off the table risks being misconstrued as weakness, especially in the aftermath of the U.S. abandonment of its allies in Afghanistan.

[Related: Just war theory and Ukraine: Why military action against Russia is justifiable]

U.S. Secretary of State Antony Blinken has argued that Mr. Putin’s objectives appear to include imposing a sphere of influence in the region. This would be a clear threat to the principles of European security architecture developed after the Cold War, in which no country may change another’s borders by force, dictate whom it may associate with or otherwise subjugate another state to its will. As Mr. Blinken notes, there are serious global risks in allowing Russia to disregard these principles with impunity. However, honest messaging around the low prospects of Ukraine’s imminent acceptance into NATO could be helpful if it reduces Russia’s threat perception. This would not imply an abandonment of core principles.

What Thomas Wright at The Atlantic calls “the sliding doors approach”—attempting to increase the costs to Russia of invasion while simultaneously increasing rewards offered for de-escalation—may have better prospects of success than a show of force. Indeed, this seems to have been the thinking behind NATO strategy. The buildup of assets in the region and supply of arms to Ukraine signals resolve to resist further Russian aggression and to thwart Mr. Putin’s wider ambitions. At the same time, there are ongoing diplomatic efforts to identify possibilities for constructive engagement that respect “red lines” but provide an opportunity for de-escalation.

The just war framework allows leaders to judge whether military action is reasonable in light of traditional principles and pragmatic considerations.

Prospects for a diplomatic solution do not look promising at this point, although suggestions last Friday that Mr. Putin had already made the decision to invade were walked back by White House National Security Advisor Jake Sullivan. The United States and its allies are advising their citizens to leave immediately and are taking steps to close their embassies in the Ukranian capital of Kyiv within days.

Pax Christi International has called on Pope Francis to intervene, likening the current situation to the Cuban Missile Crisis of 60 years ago, which brought the world to the brink of nuclear war. At that time, Pope John XXIII sent emissaries to communicate privately with both sides, and he made a public appeal for moral responsibility. Pope Francis has already shown leadership on the Ukraine crisis by calling for a nonviolent resolution and instituting a world day of prayer for Ukraine; he is in a unique position to continue dialogue and build trust among all parties.

[Related: A Vision of Peace: How the prophetic 'Pacem in Terris' helped change the world.]

Most Ukrainians follow Orthodox Christianity, but the country also has a branch of the Catholic Church, practicing an Eastern rite while being loyal to the pope. Major Archbishop Sviatoslav Shevchuk, head of the Ukrainian Greek Catholic Church, has expressed the view that a papal visit would restore hope for a peaceful solution, as “there is consensus in Ukraine, not just amongst Catholics but also among Orthodox and even non-believers, that Pope Francis is the most important moral authority in the world today.” Pope Francis has also improved relations between the Vatican and the Russian Orthodox Church, which has close ties with the Kremlin. His meeting with Russian Patriarch Kirill in Cuba in 2016 was the first between a pope and a Russian patriarch since Christianity split into Eastern and Western branches in 1054.

Further, the Catholic concept of a “just war” can be an important shared value system as part of a constructive papal intervention. Politicians are adept at reframing their intentions for rhetorical effect, and the language of the just war tradition, as Pope Francis rightly warns in “Fratelli Tutti,” may sometimes be co-opted in an attempt to disguise the motives of an aggressor. But any call to abandon the tradition altogether (perhaps in light of the destructive power of modern warfare) neglects its role as a mechanism for holding the powerful to account—and for inserting a process of serious reflection between a leader’s impulse to act and the translation of that impulse into a decision that will have consequences, domestically and internationally, that cannot be undone.

Aggression is a sign of weakness, not strength. Strong leaders are not slaves to fear, anger or ego. They are committed to and driven by the shared values of their culture. They take time to reflect before committing blood and treasure to any military endeavor. And they are ever conscious of the historic responsibility they bear for making prudential judgements in the interests of the people they lead and represent, and in pursuit of the global common good.

It is important to continue to seek a nonviolent resolution to the crisis in Ukraine and simultaneously to attempt to deter aggression. An 11th-hour intervention by Pope Francis might avert further suffering for the people of Ukraine and potentially catastrophic global consequences. We believe the ethics of just war, and the traditional process of reflection on its criteria in advance of military action, remain valuable as a framework for accountability and for robust, creative diplomatic efforts in pursuit of peace. 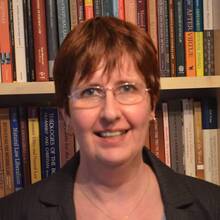 Jackie Turvey Tait is a tutor on the CRES Course at Ripon College, Cuddesdon, and a research associate at Liverpool John Moores University. 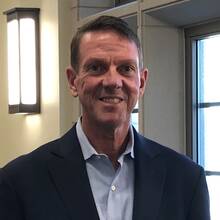 Tobias Winright is an associate professor of theological and health care ethics at Saint Louis University, in St. Louis, Mo., and an associate member of the Las Casas Institute for Social Justice, Blackfriars Hall, at Oxford University.

@TobiasWinright
Show Comments ()
Join the conversation: Login or create an account
Before you can comment, you need to update your profile to include your first and last name, as required in our comments policy. Then reload this page and you'll be set up for commenting. Update your profile