Pope Francis to Patriarch Kirill: ‘We are brothers’ 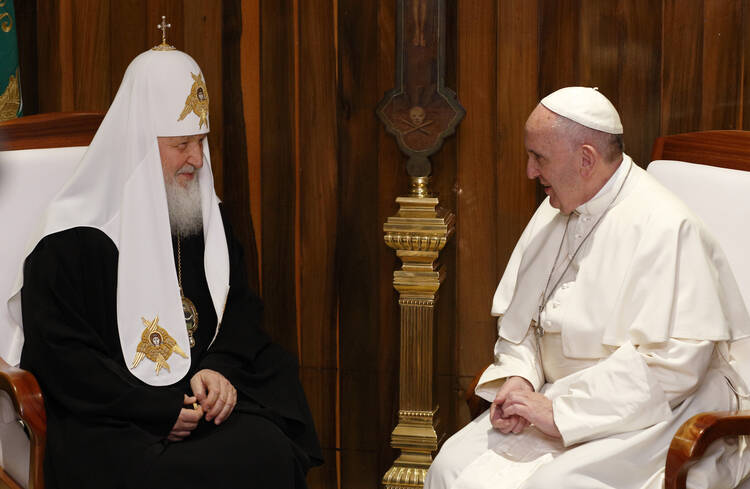 Pope Francis and Patriarch Kirill walked toward each other smiling, then embraced and kissed each other three times with warmth and emotion, as they met for the first time ever, in a lounge at Havana’s José Martí  International airport, at 2:26 p.m. (local time) on Feb 12.

“Finally!” That was the pope’s first word as he met the patriarch. And then in the following 10 minutes, speaking in Spanish, he told Patriarch Kirill many times, “We are brothers! We are brothers!”

The two leaders spoke together in public as photographers and TV camera operators recorded this first ever meeting between a pope and a patriarch of Moscow.

“Now the things are much easier,” the patriarch remarked, as both smiled warmly and with great affection, clearly happy they were finally together.

“It is now more clear that this is the will of God,” Francis added as the two talked to each other through interpreters—Cardinal Kurt Koch, the president of the Pontifical Council for Christian Unity, and Metropolitan Hilarion, the head of the External Relations Department of the Moscow Patriarchate.

After the brief public session, the two Christian leaders then spoke together in private behind close doors, always assisted by the interpreters. Their private conversation is expected to last two hours, after which they will sign a joint declaration, the text of which will only be released after it is signed.

Francis arrived at Havana’s José Martí  International airport less than half an hour earlier, at 1:55 p.m. local time on Friday afternoon, Feb. 12, after a 12-and-a-half-hour flight from Rome, especially for this meeting with Patriarch Kirill. The Russian Church leader had arrived the previous day.

This neutral venue, on the island of Cuba, had been agreed on less than three months ago since both church leaders were in this region at the same time (see my story yesterday).

This was the first meeting ever between a Bishop of Rome and a Patriarch of Moscow in the more than 1,000-year history of the Russian Orthodox Church (ROC). It opens a whole new chapter in relations between the Catholic Church and this sister Church, one that could also have great significance for the future of the Catholic-Orthodox journey to Christian unity.