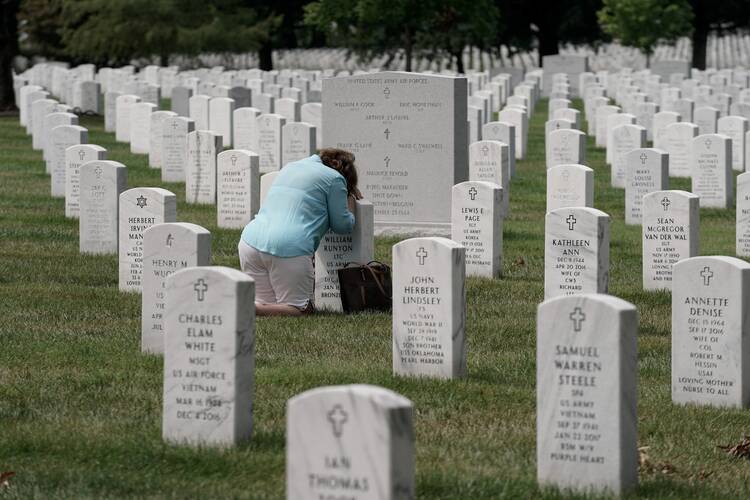 As of Aug. 9, six cities in Afghanistan had fallen to the forces of the Taliban, which also seemed poised to seize the capital of Kabul. The rapid advance of the Islamist juggernaut followed President Biden’s announcement in July that the U.S. military mission in Afghanistan would conclude on Aug. 31. How tragically ironic that the Taliban may be back in control of Afghanistan by the time the United States observes the 20th anniversary of the terrorist attacks of Sept. 11, 2001. Rooting out Al Qaeda and Osama bin Laden, and eliminating the Taliban’s ability to offer aid and comfort to terrorism, was the stated casus belli of the U.S.-led invasion of Afghanistan later that year, a conflict that has claimed nearly 200,000 lives, according to the Costs of War Project at Brown University.

In the aftermath of 9/11, as the U.S.-led invasion of Afghanistan was getting underway, the U.S. Conference of Catholic Bishops released a pastoral message, “Living With Faith and Hope After September 11,” which offered moral guidance drawn from the church’s traditional just war framework: “We acknowledge…the right and duty of a nation and the international community to use military force if necessary to defend the common good by protecting the innocent against mass terrorism,” the bishops wrote, adding that “every military response must be in accord with sound moral principles, notably such norms of the just war tradition as non-combatant immunity, proportionality, right intention and probability of success.”

Yet at the same time that they invoked the church’s just war tradition, the bishops acknowledged the difficulty of applying its provisions in the contemporary world, conceding, for example, that “probability of success is particularly difficult to measure in dealing with an amorphous, global terrorist network.” The Afghan War was but one theater in a global war waged against primarily non-state actors. The bishops were aware that traditional just war theory, which was first elaborated systematically in Catholic thought in the late Middle Ages, presupposes that the units of its moral calculus are nation-states, not transnational terrorist networks like Al Qaeda.

Such seeming anachronisms have prompted many Catholics in recent years to ask whether just war theory is still relevant or even necessary in the 21st century.

Such seeming anachronisms have prompted many Catholics in recent years to ask whether just war theory is still relevant or even necessary in the 21st century. Some groups have even called for the abrogation of just war doctrine and the development of a completely new framework. An international conference organized by the Dicastery for Promoting Integral Human Development, held at the Vatican in 2016, argued in its final communique that there are few, if any, wars that can be considered just and that just war theory has been used more often “to endorse rather than prevent or limit war.” Yet as the writer Peter Steinfels observed in 2016, the history of just war theory is a good deal more complex than that, and the pacifists’ “counterfactual narrative ignores the fluctuating forms and fortunes of just war thinking over many centuries.”

Pope Francis has also questioned the viability of just war theory, writing in “Fratelli Tutti” that “we can no longer think of war as a solution, because its risks will probably always be greater than its supposed benefits…. In view of this, it is very difficult nowadays to invoke the rational criteria elaborated in earlier centuries to speak of the possibility of a ‘just war.’” Pacifists took the pope’s words as a clear nod in their direction. Perhaps they were, but the pope appeared to be addressing the difficulty, not the impossibility, of applying just war principles in the modern world. If the pope’s comments tell us anything definitive, it is, at a minimum, that just war theory needs to be updated if it is to be relevant.

Presuming, then, that the church does not wish to throw out the baby with the bathwater, how should it go about updating the tradition and articulating a more realistic framework? First, as Bishop Robert McElroy of San Diego has noted, any new framework must be built on “a comprehensive dedication to international norms and the power of nonviolence to achieve peace with justice.”

Regardless of how the church’s thinking evolves, a greater effort must be made at every level of ecclesial life to educate Catholics throughout the world about the church’s teachings on war and peace.

Such a fundamental commitment does not require the complete abandonment of the possibility of armed intervention. The tragic reality of this fallen world makes it relatively easy to imagine scenarios in which nation-states might need to use proportional force to protect the common good. When addressing the United Nations in 2008, Pope Benedict XVI indicated that the international community may even have a moral duty to intervene in situations in which regimes have failed to protect their citizens from genocide, war crimes, ethnic cleansing, crimes against humanity and catastrophic natural events. Such interventions should always be a last resort and should always be conducted under the auspices of the United Nations and an international constabulary force.

Yet the traditional just war framework has evolved beyond a calculus for deciding whether armed conflict is morally justified (jus ad bellum) or how such conflicts should be waged once they are initiated (jus in bello). The tradition also has much to say about the moral responsibilities of the various actors in the aftermath of conflict (jus post bellum). International progress since 9/11 on banning landmines and cluster munitions are examples of how traditional just war principles have been developed and adapted to particular contemporary challenges. A recent conference on global disarmament at the University of London’s School of Oriental and African studies, which was co-sponsored by the Holy See, is but one example of the kinds of creative collaborations required to develop and implement a framework for war and peace.

Lastly, as the church’s reflection continues, Catholics must continue to bear witness to both justice and forgiveness. In the immediate aftermath of 9/11, St. John Paul II spoke of justice; but even more, he had the courage to speak of forgiveness at a time when few were in the mood to hear it. “Forgiveness is in no way opposed to justice,” he wrote, “as if to forgive meant to overlook the need to right the wrong done. It is rather the fullness of justice…. Peace is essential for development, but true peace is made possible only through forgiveness.”