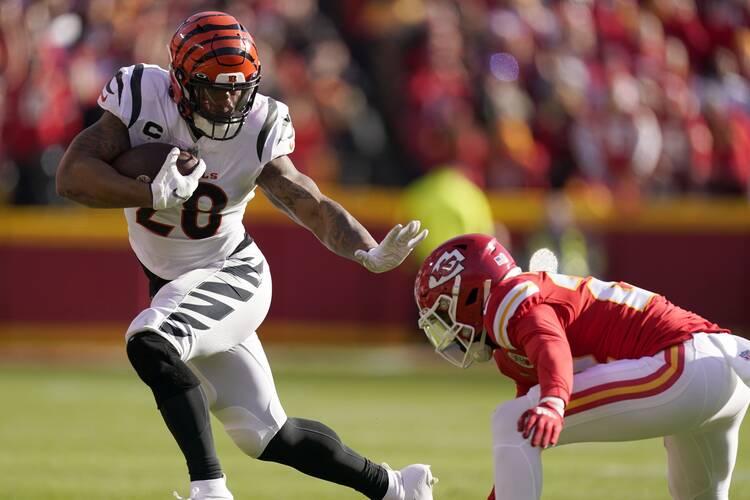 In what has become something of a tradition, the archbishops of the two cities that will face off in next week’s Super Bowl have placed a wager on the game—and are hoping to capitalize on the attention by raising money for Catholic schools.

Archbishop José Gomez of the Archdiocese of Los Angeles will send a selection of baked goods from the L.A.-based Porto’s Bakery to his Cincinnati counterpart, Archbishop Dennis Schnurr, should the Rams win. If the Bengals are victorious, Archbishop Schnurr will pony up a case of Cincinnati’s Graeter’s ice cream.

The Rams and the Bengals will face off on Feb. 13 in Los Angeles.

In what has become something of a tradition, the archbishops of the two cities that will face off in next week’s Super Bowl have placed a wager on the game.

As part of the wager, the archbishops are encouraging Catholics to donate to a special fund to benefit Catholic schools foundations in each city. The victorious city will receive 60 percent of the money raised, with the rest going to the runner up. Each bishop has donated $1,000 to the fundraiser.

Wagers between bishops have taken place regularly in recent years.

In 2020, San Francisco Archbishop Salvatore Cordielone and Bishop James V. Johnston Jr. of Kansas City-St. Joseph, Mo., placed a bet on the outcome of the game. On the line were Dungeness Crabs from San Francisco and cuts of beef from the Kansas City Steak Company. The Chiefs beat the 49ers 31 to 20.

The archbishops of Boston and Philadelphia placed a wager on Super Bowl LII in 2018, which saw the Eagles come out on top over the Patriots. At stake was a $100 donation to the opposing city’s Catholic Charities office, plus lobsters from Boston’s Cardinal Seán O’Malley and Philadelphia cheesesteaks from Archbishop Charles Chaput.

“We may disagree on the winning team, but on Catholic education, our bet is on our Catholic schools in both archdioceses all the way,” Archbishop Gomez said in a press release. “I’m proud of the great work of our students, teachers, staff, families and parish communities that make our Catholic Schools great, and for the generous support of the faithful through [the Catholic Education Foundation] so that our students have the opportunity to learn and grow to become the leaders of tomorrow.”