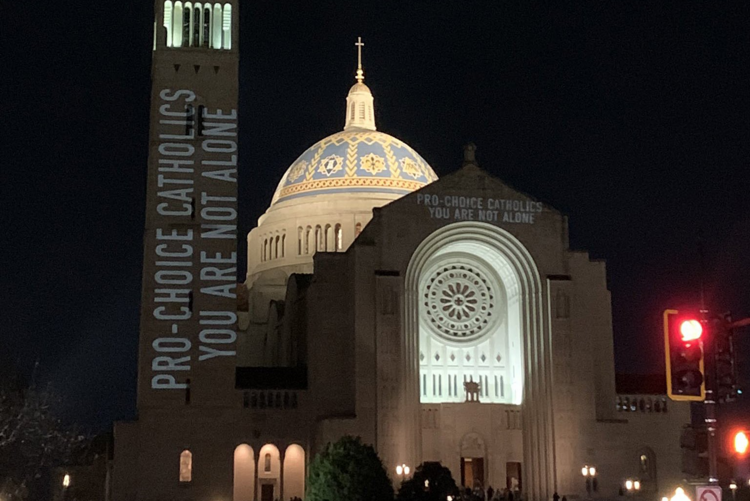 Supporters of legal abortion project a message on the Basilica of the National Shrine of the Immaculate Conception in Washington as pro-life advocates attend the National Prayer Vigil for Life Jan. 20, 2022, inside the shrine's Upper Church. (CNS photo/Ashley Wilson, courtesy Catholics for Choice)

With tens of thousands of anti-abortion protesters gathered in Washington for the annual March for Life, a group supporting legalized abortion staged a counterprotest on Thursday night, projecting pro-abortion rights messages on the Basilica of the National Shrine of the Immaculate Conception during the National Prayer Vigil for Life.

Using a projector located across the street, Catholics for Choice illuminated the facade of the basilica with messages such as “Pro-choice Catholics you are not alone,” “Stop stigmatizing; Start listening,” “Mi cuerpo, mi decision” (“My body, my decision” in Spanish) and the words “Pro-choice Catholics” within a Christian cross, Religion News Service reported.

Another projection stated, “1 in 4 abortion patients is Catholic.” (In 2014, the Guttmacher Institute reported that 24 percent of women who obtain abortions identify as Catholic.)

So I’m outside the Basilica of the National Shrine of the Immaculate Conception in DC, and Catholics for Choice is here projecting messages onto the church in support of abortion rights.

The protest coincides with the basilica’s “prayer vigil for life,” happening inside. pic.twitter.com/0y1M7X9ByC

Jamie Manson, the head of the organization, posted on Twitter on Friday that the goal of the protest was not to change minds about abortion rights but to make a statement.

“We wanted to name a truth that always gets lost during the March for Life: the majority of Catholics are pro-choice & many practicing Catholics have abortions,” she wrote. “We wanted our voices to be heard and emboldened.”

Cardinal Wilton Gregory, the archbishop of Washington, condemned the protest.

With tens of thousands of anti-abortion protesters gathered for the annual March for Life, Catholics for Choice projected pro-abortion messages on the Basilica of the National Shrine of the Immaculate Conception.

“The true voice of the Church was only to be found within The Basilica of the National Shrine of the Immaculate Conception last evening,” he said in a statement. “There, people prayed and offered the Eucharist asking God to restore a true reverence for all human life. Those whose antics projected words on the outside of the church building demonstrated by those pranks that they really are external to the Church and they did so at night.”

Archbishop Salvatore Cordileone, who heads the Committee on Laity, Marriage, Family Life, and Youth for the U.S. Conference of Catholic Bishops, posted on Twitter in response to the protest: “The attempted desecration is enormous. Diabolical. Mother Mary, pray for them, now and at the hour of death. Amen.”

A separate protest is planned for Saturday in New York, where an organization called NYC for Abortion Rights says it will demonstrate in front of Saint Patrick’s Cathedral during a Mass. An online advertisement for the event, dubbed “F*** the March for Life,” encourages people to show up with musical instruments and pots and pans.

“We’re disrupting the Catholic Church’s anti-abortion bulls*** on the anniversary of the Roe v. Wade decision,” the group said in a tweet on Jan. 19.

Catholics for Choice illuminated the facade of the basilica with messages such as “Pro-choice Catholics you are not alone” and “Stop stigmatizing; Start listening.”

A spokesman for the Archdiocese of New York said the church was aware of the planned protest and said in an email to America, “It is sad to imagine that there are actually people who protest life.”

In an interview with America, Ms. Manson said Catholics for Choice was inspired by the AIDS activist group ACT UP, which targeted the Catholic Church in the 1980s and ’90s for its efforts to fight public health campaigns promoting condoms, as well as the activist Robin Bell, who used a projector to shine messages against President Donald Trump on the Trump International Hotel in Washington. She said the group felt compelled to stage a dramatic protest because of concerns that the Supreme Court could overturn Roe v. Wade later this year.

“We thought it was a really creative, non-destructive, powerful way to communicate a message to an institution that really seemed deaf to any message and that was ignoring any messages to the contrary,” she said. “The point was to make our voices heard and to embolden people who we know are pro-choice Catholics but are afraid because the punishments are so severe to speak out about it.”

A 2018 article about the anti-Trump projection protests noted that the method of protest was legal so long as protesters were not breaking any other laws. The Metropolitan Police Department told The Associated Press that it “will not engage in any enforcement actions regarding light projections.”

“The true voice of the Church was only to be found within The Basilica of the National Shrine of the Immaculate Conception last evening,” Cardinal Wilton Gregory said in a statement.

Ms. Manson declined to directly answer a question about the cost of the demonstration, stating, “It is significantly less than the bishops have spent on their anti-choice lobbying efforts over the last four decades.”

The projection demonstration was the latest effort by abortion rights protesters to target Catholic worship spaces.

Last year, several protesters disrupted a Catholic Mass in Columbus, Ohio, holding signs and chanting in favor of abortion rights, and in Poland, protesters have targeted Catholic churches as part of efforts to loosen abortion restrictions there.

The head of the U.S. bishops’ pro-life committee, Archbishop William Lori, called on Catholics to pray and fast in the months leading up the Supreme Court’s decision in the Dobbs v. Jackson Women’s Health case.

“The Catholic Church’s opposition to abortion is a response of love for both mothers and their children in the womb,” Archbishop Lori said in a statement. “We pray that this important case might reverse Roe and its unjust abortion license.”

Speaking at a Mass on Friday in Washington, Cardinal Seán O’Malley said that even if Roe is overturned, Catholics must continue to work for a culture that supports families and pregnant women.

“Dismantling unjust laws is only the beginning. We still have the arduous task of creating a pro-life culture, of changing heart and minds,” he said. But if pro-lifers “come across as judgmental and self-righteous we’re never going to get a hearing in America.”

[Read next: Catholics for Choice’s basilica stunt was shocking. Sacrilege often is.]