Pro-life and pro-Black: Meet a woman who’s changing the conversation about racism and abortion 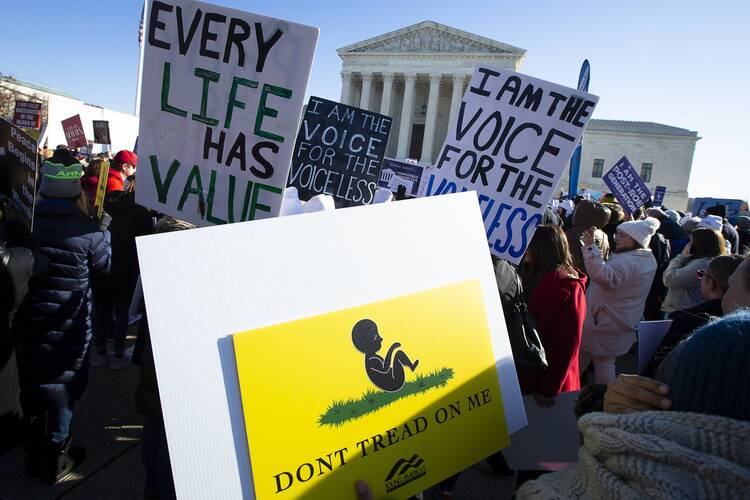 Pro-life advocates are seen near the U.S. Supreme Court Dec. 1, 2021, the day justices heard oral arguments in a case about a Mississippi law that bans abortions after 15 weeks of gestation. (CNS photo/Tyler Orsburn)

On the latest episode of the Gloria Purvis Podcast, Gloria speaks with Cherilyn Holloway, the founder of Pro-Black Pro-Life, an organization that aims to build trust and open the line of effective communication around difficult issues.

In their conversation, Gloria and Cherilyn debunk myths around Black women, Black motherhood and Black poverty. They also talk about how the voices of Black people are often overlooked or tokenized within the pro-life movement and how pro-life stances have become entangled with partisan politics. Finally, Gloria and Cherilyn question the racist stereotype that Black women are more eager to get abortions than other women.

Gloria Purvis: I think people probably hear Pro-Black Pro-Life and think, “What?” Can you help people understand what you experienced in the pro-life movement that made you realize, “You know, there needs to be the emphasis that there is a part of the movement that’s pro-Black”?

Cherilyn Holloway: In 2017, I became the executive director of my local pregnancy center. But they didn’t really talk about the issues as “pro-life” or “pro-choice.” It was just like, “We’re trying to help women choose life instead of abortion.” It wasn’t until I accepted that job where I was like: “Oh, well, yeah, this is what I am. I am pro-life.” The racial issue didn’t really come up until about 2018, when I went to a pro-life women’s conference and got some statistics on abortion in the Black community. And I was floored by the numbers. And I just kept thinking to myself, “This is so odd that nobody in the Black community is talking about this.”

GP: One of the things I think you and I have talked about before is how Black people are presented or perceived within the [pro-life] movement. Can you talk a little bit about that?

CH: When I would go to [pro-life] different conferences, the only time I would see Black people even presented with a microphone is if they were either post-abortive or they had left an abortion clinic. There wasn’t anyone [represented] who entered into this movement via their religious beliefs or just their own personal moral beliefs that [a fetus] is a human life. It was always kind of like, “Look who we rescued.” It was very easy for people to become tokenized, right? The reality is that the moment you kind of stepped out of their little box [by also talking about racism] then it was like: “Wait a minute, wait a minute. This is not what you’re supposed to do.”

The moment you kind of stepped out of their little box [by also talking about racism] then it was like: “Wait a minute, wait a minute. This is not what you’re supposed to do.”

With Pro-Black Pro-Life I have created this platform where there is no political alliance. We are a ministry, we are Christian, but we are here for everybody. We want there to be a space for you to be able to wrestle through all racial injustice, including racial injustice within the womb.

GP: I know there are gonna be people saying: “But why pro-Black? What does that even mean?”

We have done a crappy job—specifically the churches in these communities—of embracing them, specifically single mothers. You cannot say how terrible single motherhood is and then expect people to want to be single mothers when they find themselves unwed and pregnant. Where is the discipleship? Where are we walking alongside these women and saying: “Yes, this happened. We’re gonna walk alongside you, and we’re going to help you create a better life for yourself and your child when it comes to your relationship with Christ”?

You cannot say how terrible single motherhood is and then expect people to want to be single mothers when they find themselves unwed and pregnant.

GP: People really [believe that] if you are pro-life, you’re a conservative Republican, and if you are pro-choice or pro-abortion, you’re a Democrat. Do you think that that also weighs heavily into how Black people see the movement and why they may or may not get involved in the pro-life side?

CH: Absolutely. Because people are watching Fox News, they’re seeing clips on their Facebook feed and thinking like: “This is ridiculous. This person doesn’t know anything about the Black community.” Or: “This person doesn’t speak for me, and they’re pro-life. And I care about abortion, but I don’t want people to think I’m like that person.” The first question people always ask me is, “Did you vote for Trump?” And they ask me that for themselves—not for me. They’re trying to decide whether they like me or not. And I refuse to answer.

GP: I know you’re not Catholic, but I’m curious what advice you have for a community like the Catholic Church, which is really just as divided as Americans are more broadly.

CH: I would just say, don’t be afraid. This whole idea that it’s “too much, it’s too much to care about....”—that’s what we’re called to do! And so being able to have courage enough to stand in the gap for what is right—you do it while you’re afraid until you’re no longer afraid. And that’s what I started doing. I had talked to a bunch of people that were pro-life [and] realized that most of them were on the same page with me with the whole pro-Black thing. It’s not anti-white. It’s not.

I had talked to a bunch of people that were pro-life [and] realized that most of them were on the same page with me with the whole pro-Black thing. It’s not anti-white.

GP: This is a very important point to emphasize because too often, when people say pro-Black, it is perceived as anti-white because there is a pro-white movement that is decidedly anti-Black. And people can’t see that Black people live in this country under different terms than white people do. To say you’re pro-Black does not mean you are anti-white. It means you love the Black community, which for far too long has been an object of derision.

When I first saw “Pro-Black Pro-Life,” I immediately got it. But I realized there are also voices that have been elevated in the [pro-life] movement that have Black faces, but their messages are decidedly antagonistic toward Black movements of justice.

CH: The thing I had to realize is that I’m not here for the pro-life community. I reach outside for the pro-life community. I never needed a mic handed to me from someone within the pro-life community to be able to speak or have a platform because that was never God’s intention for me. My job is to get people to have a full understanding and awareness of [abortion issues] while they’re caring about everything else. So when they see police brutality or hear about the mortality rate of Black mothers giving birth, and when they get enraged about that, they can get enraged about what’s happened in the Black community when it comes to abortion.

GP: Do you think that because our community experiences racism, these kinds of attacks against our being, there’s a natural receptivity to the desire to defend life in the womb?

CH: Absolutely. I have these two-hour conversations with groups of Black women, groups of Black men, and they always start off disagreeing with me. I’m getting ready to step in front of someone’s choice—that’s what they’re thinking. But you’re not “taking the choice away.” You’re bringing them the truth.

GP: The notion that poor Black women don’t want their children, or that poor Black women somehow are unfairly handcuffed to poverty because of having children—the narrative that we want these abortions is a false one. It’s being put on us in the name of “freedom,” in the name of being “upwardly mobile.” And I’m glad you’re having a conversation saying, “Look, this is the deal.”

CH: You also have to be willing to let people ask you questions and let them ask you questions that are very difficult. I have a friend who was told that her son had a 30 percent chance to live, multiple times during her pregnancy. And her fear was like, “If I give birth to this baby and the baby’s not alive, I’m gonna be crushed, and I already have another baby I’ve gotta take care of.” Her son is 7. [Talking to people about abortion involves] breaking down to them all the lies we’ve been fed, and how we just so naturally believe that if it’s legal, everything must be okay—which we know is not true.