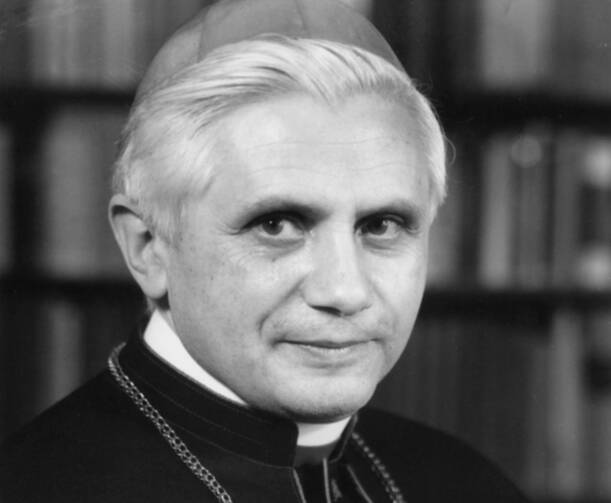 Then-Archbishop Joseph Ratzinger, who later became Pope Benedict XVI, is pictured in this file photo May 28, 1977, the day of his ordination as archbishop of Munich and Freising. (CNS photo/KNA)

“He welcomes the reappraisal in Munich as well as the publication of the report,” the newspaper cited Benedict’s private secretary, Archbishop Georg Gaenswein, as saying. Archbishop Gaenswein added that the former pope had taken the fate of the abuse victims “very much to heart.”

According to the newspaper, the experts’ report, which is also being keenly-awaited internationally, will be comprehensive. The research conducted by the Munich law office Westpfahl Spilker Wastl (WSW) at the behest of the archdiocese will take up 350 pages alone about one of the most prominent cases, that of a repeat-offender priest identified only as “Peter H.” In 1980, the priest transferred from Essen to the Munich archdiocese which was then led by Archbishop Joseph Ratzinger, later Pope Benedict.

The Munich archdiocese has said it will give itself a week’s time before commenting about the experts’ report. “Following an initial study” the response would come at a press conference on January 27, the archdiocese Ordinariate said.

An explosive element in the report is that, of the period under examination—1945 to 2019—several prominent church men who headed the archdiocese are still alive. This applies both to the Pope Emeritus Benedict XVI as well as to Cardinals Friedrich Wetter and Reinhard Marx, the current head of the Munich-Freising archdiocese.

For the period under examination—1945 to 2019—several prominent church men who headed the archdiocese are still alive, including Pope Emeritus Benedict XVI.

The investigation results were originally to have been published in 2021. But in November, the lawyers postponed it, saying new facts had emerged. The WSW law office additionally had always stressed that it would present the results on its own authority. Representatives of the Munich and Freising archdiocese will also only first learn the results at the presentation.

Together with the publication of the experts’ report, a new contact office for abuse victims in the archdiocese will begin its work. The office will be staffed by up to six experienced psychologists and psychotherapists from the archdiocesan counseling services, in accordance with a recommendation made by the victims’ advisory board, reports said.

The report by the Munich lawyers is expected to cite systemic shortcomings as well as mistakes made by people in authority. The WSW office has previously been active as an investigator in two other dioceses in Germany. Its report in Aachen has been published, but the one for Cologne has not.

In Cologne, Cardinal Rainer Maria Woelki cited what were termed methodological deficiencies and potential libel problems for holding back the report. He then handed the investigation to another law office. WSW had previously provided a sexual abuse report for the Munich archdiocese in 2010, but it was never published in full, with the diocese citing data privacy issues as the reason.