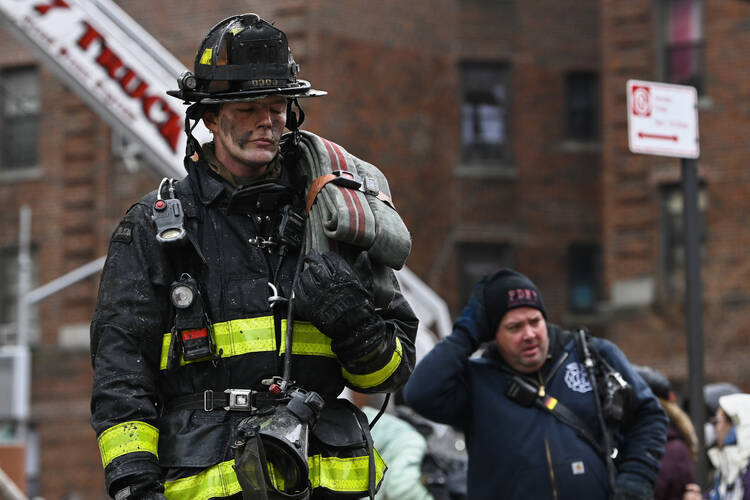 ROME (AP) — Pope Francis offered his condolences Monday to the victims of the “devastating” apartment fire in the Bronx borough of New York that killed 19 people, nine of them children.

Francis sent a telegram to New York Cardinal Timothy Dolan offering “heartfelt condolences and the assurance of his spiritual closeness” to those affected by the blaze. The telegram was signed by the Vatican secretary of state, Cardinal Pietro Parolin.

The blaze, which also sent dozens of people to the hospital, was the deadliest in New York City in three decades. Investigators say a malfunctioning electric space heater, plugged in to give extra heat on a cold morning, started the fire in the 19-story building.

Pope Francis offered his condolences Monday to the victims of the “devastating” apartment fire in the Bronx borough of New York that killed 19 people, nine of them children.

Francis’ message noted the loss of so many children, and said the pope “entrusts the victims and their families to the merciful love of Almighty God and invokes upon all consolation and strength in the Lord.”

Cardinal Dolan planned to visit the site Jan. 10 and tweeted: “It doesn’t get worse than what we witnessed in New York yesterday at that tragic fire in the Bronx. I’m visiting the scene with the fire companies that responded so that I might see how the church can assist. Thank God for the @FDNY.”

St. Simon Stock-St. Joseph Parish, which serves the Bronx neighborhood where the apartment building is located, was celebrating a special Mass the evening of Jan. 10 for the deceased and all affected by the tragedy. New York’s Auxiliary Bishop Peter J. Byrne was expected to attend.

Carmelite Father Michael Kissane, parish pastor, reported the church is located one block from the apartment building. The apartment complex was home to a large number of Gambian immigrants, many of whom are Muslims. Only one registered family from the parish lived in the building -- and that family was displaced because of the fire.

An early indication was that a space heater may have set off the fire in the 120-unit building. New York City Fire Commissioner Louis Nigro said victims were found “on every floor, in stairways.”

The building, Twin Parks North West, was built in 1972. One person who escaped the fire said it had interior stairways, but no exterior fire escapes.

It was the second U.S. apartment fire in less than a week that claimed double-digit casualties. A dozen fatalities were reported from a Philadelphia apartment fire Jan. 5, eight of them children.