Inflation, infrastructure, Build Back Better: How should we judge the economy during Biden’s first year? 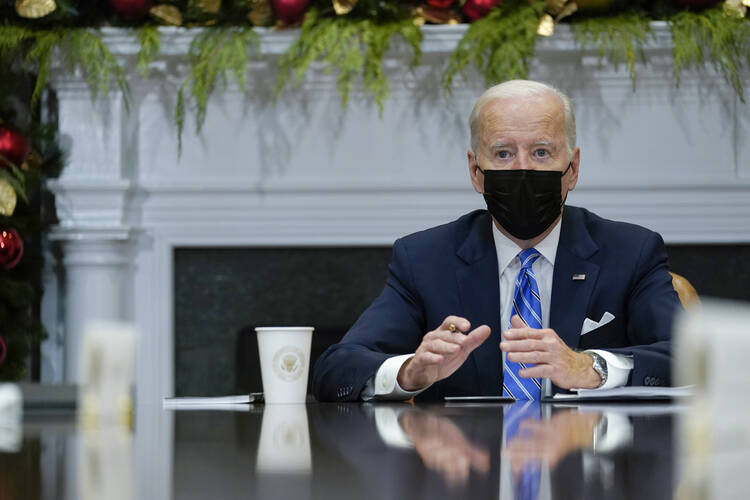 Many commentators are rushing to judgment about the economic policies of the Biden administration’s first year. Some call his proposals as bold and transformative as the New Deal, others worry that the administration is not worried enough about inflation. The spending programs in the Build Back Better plan, which may not even pass Congress now that West Virginia Senator Joe Manchin has said he will not support it in its current form, remind many of the Great Society agenda of the 1960s. By comparison, I like to think of the recently enacted infrastructure package as a harkening back to the Eisenhower era’s Interstate Highway and St. Lawrence Seaway projects.

But it is too early to evaluate each of the policies in these legislative packages, much less any package as a whole. As an empirical macroeconomist, I am absolutely certain that we are in a time of massive uncertainty. The data for the past two years, both at the start of the Covid-19 pandemic and after the initial economic recovery, are significantly different from anything we have seen before. The pandemic has massively jolted the global economy, with effects in financial and labor markets—as well as in global supply chains—that no one could have anticipated.

I am absolutely certain that we are in a time of massive uncertainty. The pandemic has massively jolted the global economy, with effects that no one could have anticipated.

So it would be an act of hubris to predict how any of the Biden packages will play out over the next year or the next 10 years. As Yogi Berra taught us, “The future ain’t what it used to be.”

Using a sports analogy, we have to realize that the Biden administration is playing a long-term game. And the success of his policies may require some short-term inflation, as well as longer-term higher oil prices and higher interest rates. That said, I have a few observations.

The success of his policies may require some short-term inflation, as well as longer-term higher oil prices and higher interest rates.

First, I applaud this year’s passage of the Infrastructure Investment and Jobs Act. Ray Fair, an economist at Yale University, has noted that a decline in public infrastructure spending began five decades ago, when the United States became less “future oriented.” Indeed, many economic historians argue that the Biden package does not go far enough to reverse this trend.

Fortunately, the Biden administration, unlike the Obama administration with its post-recession stimulus package, is not emphasizing “shovel-ready” projects. There will be direct employment effects, but they will be for highly skilled construction workers with heavy-duty construction equipment, not a larger army of people wielding shovels. In other words, Mr. Biden is not overselling the initial employment effects for less skilled workers.

​​[Want to discuss politics with other America readers? Join our Facebook discussion group, moderated by America’s writers and editors.]

The larger question is: How will the Biden economic plans improve long-term productivity? Will labor markets become more adept at helping workers and employers find matching skill sets, leading to improved wages and higher living standards? Will the infrastructure plan lead to the diffusion of new technologies that can provide jobs for workers displaced by older technologies and the outsourcing of jobs to other nations? To me, these are the touchstones of good public policy.

As always, every government program is an experiment. Some infrastructure initiatives, such as for better rail service on the East Coast, may be very productive in the long run. Other projects, such as expanded Amtrak service to other parts of the country, may be less successful. There are risks with any form of investment, public or private, but the returns are even harder to forecast as we try to imagine a post-Covid world. The way people travel and do business may be very different for decades to come. All we can say now is that some of the Biden administration’s projects may prove to be very productive and others not so productive. But they are all worth doing, even knowing that some projects will be less successful than others.

There are risks with any form of investment, public or private, but the returns are even harder to forecast as we try to imagine a post-Covid world.

Besides the direct effects of the infrastructure bill and the Build Back Better package (assuming the latter ever passes Congress), Mr. Biden may be judged on several major economic indicators. For example, what about inflation? Inflation is now hovering over 6 percent (at an annual rate), the highest level in several decades. But for more than a decade we have been worrying about falling prices or negative inflation rates (deflation) with interest rates near zero percent. If an official inflation target of 2 percent was an acceptable target for the past decade, going to 4 or 6 percent for a few post-Covid transition years will not push the average rate much higher over an entire decade.

Allowing interest rates to rise gradually to 2 or 3 percent annually, in order to stem inflation, would be welcome news. It is no secret that extremely low interest rates have biased firms toward borrowing for labor-saving technologies—which, more often than not, have not been all that productive. Just think of all of the time wasted on automated call-waiting systems, when a friendly voice on the other end of the line would have been much more helpful and productive.

And what about rising oil prices? Well, in countries in the European Union, the price of a gallon of gasoline is equivalent to well over $5 in U.S. currency, even reaching $6 in some countries. Higher gasoline prices in the United States, unpleasant as the adjustment may be, would give commuters incentives to use public transportation and for the automotive industry to move even more quickly toward the production of electric cars. Of course, what is good for the environment is not always good for the economy in the short term. So we can expect to see the Biden administration try to tamp down oil price spikes, perhaps through the release of strategic oil reserves and pressure on OPEC countries to open their taps.

Still, Mr. Biden’s overall legacy may be tied to his major spending packages. Following the baseball analogy, some of the projects in both the infrastructure law and whatever survives from the Build Back Better package may turn out to be foul balls, but some may be home runs that, over time, will improve the standard of living of American workers and reduce inequality. This mix of results is inevitable with these huge, lumpy spending packages that, because of parliamentary rules and extreme partisanship, may be the way we formulate economic policy for the foreseeable future.

Will this administration rank with those of F.D.R., Ike or L.B.J. for domestic transformation? As Yogi also supposedly said, “It ain’t over till it’s over.”