‘People are desperate’: How Catholic Charities is responding to the devastating tornadoes in Kentucky 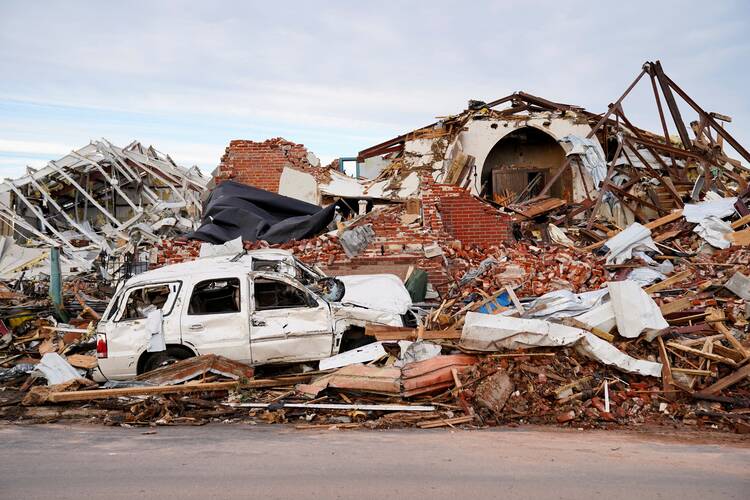 These storms were unlike the spring and fall tornadoes people living in Kentucky are used to.

The scope and intensity of the tornados were especially devastating, destroying homes and businesses over a stretch of more than 200 miles in Kentucky and four other states, leaving at least 74 people dead. Right as the communities were coming to terms with the devastation, temperatures plummeted, leaving those without gas and electricity vulnerable to the elements and in need of basics including water, food and shelter.

Which is where Catholic Charities of the Diocese of Owensboro comes in.

“We’re calling it ‘loving by the seat of our pants,’” Susan Montalvo-Gesser, the agency’s director, told America.

At a Mass last weekend in hard-hit Mayfield following the storms, Ms. Montalvo-Gesser met a family struggling to stay warm, and who had bundled up their baby before lighting a fire—in their living room. Staff from Catholic Charities was tasked with convincing the family it was not safe to stay in their home. It was a seemingly impossible task given how much had already been taken by the storms.

“People are desperate to stay warm, and they all want to stay in their homes, which aren’t safe,” she said. “And that’s the scary part.”

“People are desperate to stay warm, and they all want to stay in their homes, which aren’t safe. And that’s the scary part.”

Ms. Montalvo-Gesser predicted that the numbers of people in need of housing will only increase in the coming weeks.

“You might be able to stay in a cold place without electricity and running water for a week or two, like you’re camping,” she said. “But at some point, you recognize that your life is more important than these things that are broken around you, that you’re going to have to preserve and rebuild.”

Though her office is small, with just a few staff members, Ms. Montalvo-Gesser said the entire chancery of the diocese is pitching in as the agency solicits donations, meets with victims and figures out the best way to help. “We do a whole lot with very little,” she said. “But now it doesn’t matter if you work in youth ministry, Hispanic ministry, music, liturgy and worship, evangelization—we’ve all become Catholic Charities in the last three days.”

The goal of Catholic Charities is to work with local parishes and those immediately affected by the storms so that the right items and resources reach the people most in need.

“We’ve seen a lot of people bring in items such as water, blankets, heaters, sanitizing wipes, diapers, baby food and non-perishable foods,” she said. “Some places in the staging areas need those items, but some of them don’t, so we’d like to have the liquidity and the ability to buy the things that the people need.”

The goal of Catholic Charities is to work with local parishes and those immediately affected by the storms so that the right items and resources reach the people most in need.

Part of the mission also includes supporting local businesses so that the eventual recovery includes getting people back to work.

“The tornados didn’t just destroy homes and households. They destroyed businesses and jobs with it,” Ms. Montalvo-Gesser said. “So we want to try to keep as much money local as possible.”

The region affected by the storms has a sizable Spanish-speaking community—about 2,000 of Mayfield’s 10,000 residents speak Spanish, Ms. Montalvo-Gesser said—and for many, parishes remain trusted institutions.

This is especially important, she said, as some families are living with mixed immigration status. They remain distrustful of the government following the Trump administration’s policy of separating families. Helping them understand that federal resources or even other charities such as the Red Cross can be trusted is instrumental to saving lives.

“We’ve gained their trust as Catholic Charities. They know we’re not the government, they know their parish is not the government and that none of us are going to turn them into Immigration and Customs Enforcement,” Ms. Montalvo-Gesser said. “But it’s trying to convince them that FEMA is not under the same agency of Immigration and Customs Enforcement and that those two parts are not going to talk to each other to lead to a removal proceeding.”

Ms. Montalvo-Gesser said it can be easy to despair when looking at the piles of debris, but she remains hopeful.