Want to help victims of the tornadoes that hit six states? 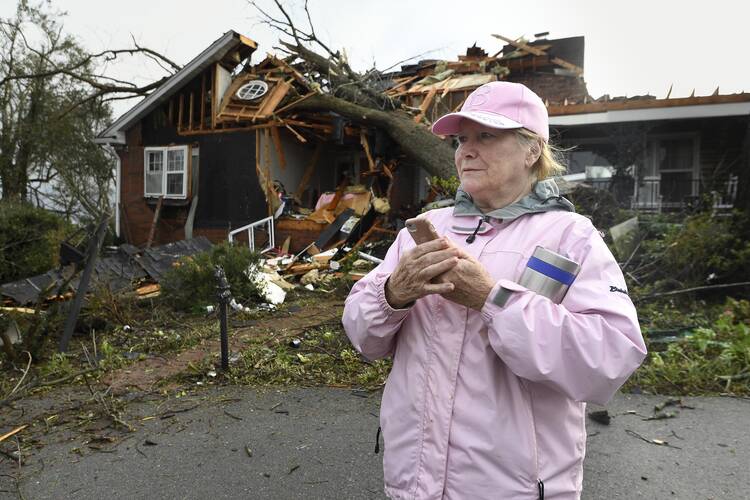 Want to help victims of the tornadoes that hit six states?

Catholic Charities USA is accepting donations at https://www.catholiccharitiesusa.org. The site has a button to hit to donate for tornado relief.

The tornadoes swept across the South and Midwest Dec. 10. On Dec. 14, authorities said at least 70 people were dead in Kentucky; six died when a tornado hit an Amazon warehouse in Illinois; four were dead in Tennessee; two in Arkansas; and one in Missouri. Mississippi also got hit. Towns were leveled and tens of thousands of people remained without power.

Susan Montalvo-Gesser, director of Catholic Charities of Diocese of Owensboro, Kentucky, said the agency had been in the process of resettling Afghan refugees when the storms hit. She called the group’s natural leader and asked him to convey to the others that she would have to redirect efforts toward the storm.

“His response floored me,” she said in a post on the Catholic Charities USA site. “He said, ‘Ms. Susan, I led a team for the International Red Cross in Afghanistan and Yemen. I’ve led teams responding to landslides, earthquakes and floods. Give me a vest and put me to work. I can help. A lot of us can help.

“That was early Saturday morning,” Montalvo-Gesser. “I knew then that Emmanuel was present in (his) response. The refugees had been through ‘hell’ and wanted to assist their new neighbors. Since then, I have received many more messages from Afghans not yet in their own homes who want to assist.”