Are racial justice movements straying from Catholic tradition — or are Catholic leaders out of touch? 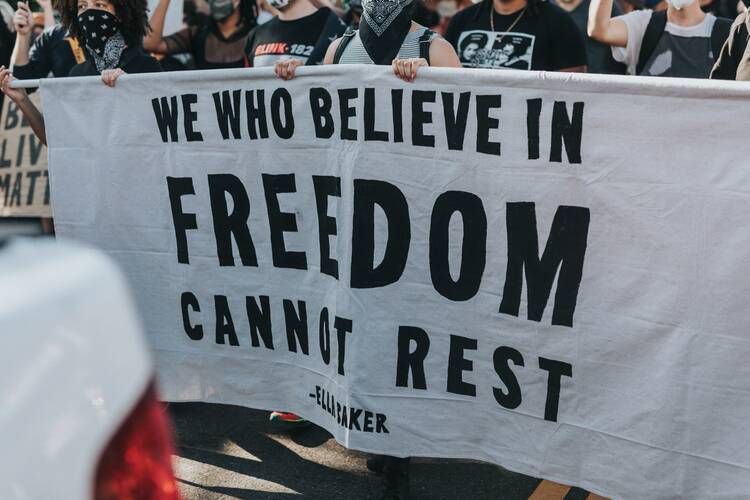 Photo by Nathan Dumlao on Unsplash

Jose H. Gomez, Archbishop of Los Angeles and president of the U.S. Conference of Catholic Bishops, released his address to the Congress of Catholics and Public Life being held in Madrid, Spain. In the address he stated that an elite leadership class has risen around the globe, one that has little interest in religion and no real attachments to the nations in which they live or to local traditions. Archbishop Gomez described the social justice movements as “pseudo-religions, and replacements and rivals to traditional Christian beliefs.”

As a Black Catholic engaged in social and racial justice movements, I can’t help but see some irony in Archbishop Gomez’s statement. It is, in fact, my traditional Christian belief that spurs me to make connections between my faith and the Gospel call for justice. This conviction on the part of Black Catholics and other groups at the margin of the church has kept us in the Christian faith in spite of the church’s history of colonization, enslavement, abuse and racism. Catholic elites, including church leaders, wealthy donors and media conglomerates, may see no connection between social justice movements and the core convictions of our church; but are these movements straying from tradition, or are our leaders out of touch?

It is, in fact, my traditional Christian belief that spurs me to make connections between my faith and the Gospel call for justice.

A 2020 Pew Research survey found that 75 percent of Black Americans (77 percent of Black Catholics) believe that opposing racism is essential to their faith. As Jamie T. Phelps wrote in Taking Down Our Harps, “African-American Christians, united by the bonds of a common oppression and a common hope, have traditionally found the story of the life, death and resurrection of Jesus a source of strength and hope in their struggle for liberation.”

Jesus’ own life is a model of sacrifice, of how to live for a more just and loving world. Unlike the European images of Jesus, the historical Jesus was an ethnic Jewish man born in Bethlehem of Judea, which is modern day Palestine. He lived under brutal Roman occupation. In his early years, his family lived as refugees in Africa. He began his public ministry by proclaiming the Spirit of the Lord had anointed him to proclaim good news to the poor, freedom for the prisoners, recovery of sight for the blind and to set the oppressed free. Jesus lived his life challenging both Roman and Jewish laws, which oppressed the poor and marginalized. His life ended when he was executed by the Roman state. But believers know his story did not end there. Jesus was resurrected from the dead, and the Spirit of God is alive and calls upon each of us to continue the work.

This is the Christianity that Black people have clung to for centuries. This is what we are fighting for when we join protests in the streets today. People of African descent in bondage in the Americas called upon God who freed the Israelites from slavery in Egypt. They have cried out for freedom when imprisoned or for solace when their loved ones were brutally murdered.

During the racial justice movement spurred by the killings of George Floyd, Breonna Taylor and Ahmad Aubrey, millions of people took to the streets in the largest mass demonstration in United States history to proclaim that Black Lives Matter. This racial justice movement rejects the lie that Black people are less than white people, subhuman, dangerous and immoral. A lie that has been used to justify slavery and colonization, Jim Crow segregation, mass incarceration and global poverty. The movement rejects this lie and instead affirms the truth found in Scripture: that all people—including Black people—are made in God’s image and likeness. That as children of God, we have dignity and deserve respect and protection. But it also says special attention must be paid to the ways in which our society historically has been structured to disadvantage us. The movement seeks to dismantle the systemic racism that has a demonic stronghold over our nation.

The movement affirms the truth found in Scripture: that all people—including Black people—are made in God’s image and likeness.

This is not a new movement. It is a continuation of the 400-year liberation struggle started by the first Africans brought to this country in chains. The same struggle that led the enslaved Kongolese Catholics to march toward freedom in Spanish Florida during the Stono Rebellion. The same struggle that inspired Harriet Tubman and Frederick Douglas to escape slavery and work to free others. The same struggle that W. E. B Du Bois and Ida B. Wells wrote about. The same movement spearheaded by Martin Luther King Jr., Malcom X and the Black Panther Party. In the 21st century, while Americans were celebrating a post-racial society after the election of its first African-American president, Black Lives Matter was organizing to expose the racial profiling, racial violence and economic and educational inequality still faced by too many African-Americans.

Opponents of the racial justice movement claim that it is made up of violent people who are hostile to Christian values and the Catholic Church. However, these are the same stereotypes that have been used to demonize and subjugate people of African descent for centuries. Research from the Harvard Radcliffe Institute concluded that roughly 97.7 percent of protests during 2020 were peaceful with no injuries reported among participants, bystanders or police. Only 3.7 percent resulted in property damage or vandalism. Police were injured in 1 percent of the protests.

The racial justice movement is much more than just marching in the streets. People across religious, cultural and socioeconomic backgrounds participated by speaking out against racism, educating themselves and others and creating community spaces where they could create solutions to end inequality.

The racial justice movement is much more than just marching in the streets.

In the Black Catholic community, Father Bryan Massingale has continued to speak out against racism, and his prophetic book Racial Justice and the Catholic Church is still relevant today. Gloria Purvis continues to be one of the most prominent voices in Catholic media defending the lives and dignity of Black people even after her show, “Morning Glory,” was taken off the radio by Guadalupe Radio Network then abruptly cancelled by EWTN. The Rev. Josh Johnson has used his unique perspective as a biracial man, whose African-American father worked in law enforcement, to bring a message of racial healing and reconciliation through his programs like Ascension Presents and his social media platforms. Catholics United for Black Lives was created as a Catholic counterpart to Black Lives Matter that is rooted in Catholic teaching. Knights of Peter Claver is the largest and oldest Black Catholic lay-led organization, and it continues its century-long social justice activism. And a group of lay Catholics including Nate Tinner-Williams, Stephen Staten, Gunnar Gundersen and myself co-founded Black Catholic Messenger as a news media site to spotlight the Black Catholic community and give voice to the three million Black Catholics in the United States who are too often ignored and overlooked by the Catholic Church.

Many Catholics condemn those in the racial justice movement who do not identify as Christians instead of encountering them through the lens of Christ’s radical love and acceptance. Black Lives Matter affirms the lives of people who are queer, trans or non-gender conforming, those who are not traditionally married, and those who are too often stigmatized in faith communities. But if Jesus were alive today, those are exactly the people he would converse with, dine with and invite to follow him. The church is being rejected by people who no longer feel it is conscionable to exclude people who Jesus would welcome simply because their lives do not fit the dominant white Christian narrative.

The racial justice movement will continue until Black people are no longer treated as second-class citizens, segregated in economically depressed neighborhoods, denied adequate education and health care, and disproportionately incarcerated and murdered by the death penalty. I, along with millions of Christians and Catholics, will continue to carry the mantle while proclaiming the Gospel message. We do not need the U.S.C.C.B. to give us permission. We need only follow what the prophet Micah proclaims the Lord requires: to do justice, to love goodness and to walk humbly with God. 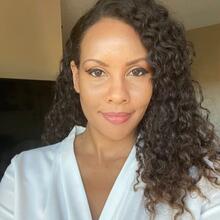 Alessandra Harris is a Black Catholic author, wife and mother of four. She holds degrees in comparative religious studies and Middle East studies, and is a co-founder of Black Catholic Messenger.

@AlessandraH17
Show Comments ()
Join the conversation: Login or create an account
Before you can comment, you need to update your profile to include your first and last name, as required in our comments policy. Then reload this page and you'll be set up for commenting. Update your profile