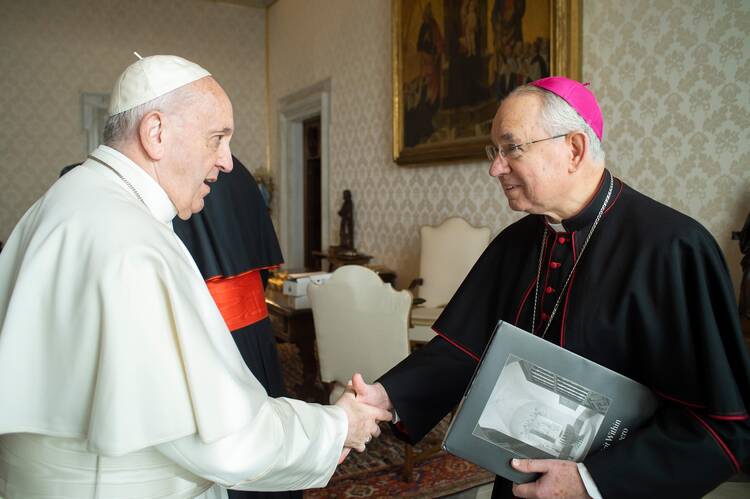 Archbishop José Gomez is the head of the nation’s largest archdiocese. He also happens to be an immigrant, a minority and the president of the U.S. Conference of Catholic Bishops. When he speaks on the issue of racism and social injustice, it is worth paying attention.

And Archbishop Gomez has a long track-record of speaking on these issues in a way that consistently challenges both the injustice of the status quo and the instrumentalization of the faith as a mere means to political ends.

After white supremacist violence in Charlottesville, Va., in 2017, Archbishop Gomez wrote about the necessity for just laws. He went even further, insisting that laws alone were not sufficient to combat the anger and bitterness afflicting our nation, even inside the church. Conversion, he insisted—conversion to and through love for one another, rooted in our common humanity—was necessary.

Archbishop José Gomez is an immigrant, a minority and the president of the U.S.C.C.B. When he speaks on the issue of racism and social injustice, it is worth paying attention.

In 2019, when a white supremacist murdered 22 people, mostly immigrants, in El Paso, Tex., Archbishop Gomez insisted that the sickness of white nationalism was the consequence of our losing sight of the foundational Christian belief that all human persons are children of God.

After the killing of George Floyd, as protests and riots swept the nation, Archbishop Gomez celebrated a Mass at his cathedral to coincide with Mr. Floyd’s funeral. He spoke in his homily of the outrage that this kind of injustice persists and the urgent need to “confront the reality of Black inequality and the racism that still infects our institutions.”

In a statement he issued as president of the bishops’ conference, he wrote about the authentic outrage we experience in the face of genuine injustice:

We should all understand that the protests we are seeing in our cities reflect the justified frustration and anger of millions of our brothers and sisters who even today experience humiliation, indignity, and unequal opportunity only because of their race or the color of their skin. It should not be this way in America. Racism has been tolerated for far too long in our way of life.

Through all these speeches, statements and homilies, the theme remained consistent: The evils of racism and social injustice that continue to plague our society cannot be adequately addressed unless we are willing to acknowledge the profound truth of our common humanity. And the only sure foundation for our common humanity is our universal fraternity as sons and daughters of God.

That brings us to an address that Archbishop Gomez delivered by video to a conference in Spain last week. It was a speech that took up many of the same themes the archbishop has been emphasizing for years: He underscored that structural racism and social inequality are real problems that we cannot ignore. He insisted that the only true solution to these evils is found in the truth about our common humanity and the fraternity that comes from being sons and daughters of the same God.

In his speech, Archbishop Gomez forcefully criticized secular social movements that replace God with ideology and in doing so set themselves up as rivals to true religion.

There was a difference in this address, however. In his speech, Archbishop Gomez forcefully criticized secular social movements that replace God with ideology and in doing so set themselves up as rivals to true religion. “Whatever we call these movements,” Gomez said, “‘social justice,’ ‘wokeness,’ ‘identity politics,’ ‘intersectionality,’ ‘successor ideology’—they claim to offer what religion provides.”

Today’s critical theories and ideologies are profoundly atheistic. They deny the soul, the spiritual, transcendent dimension of human nature; or they think that it is irrelevant to human happiness. They reduce what it means to be human to essentially physical qualities—the color of our skin, our sex, our notions of gender, our ethnic background, or our position in society.

Insofar as these movements reject a common fraternity of all as children of God, Archbishop Gomez argued, they not only fail to address the real problem of social injustice and division, but they also perpetuate the problem:

In denying God, these new movements have lost the truth about the human person. This explains their extremism, and their harsh, uncompromising, and unforgiving approach to politics.

The alternative Archbishop Gomez proposes is simple, if not always easy: “We need to proclaim Jesus Christ. Boldly, creatively. We need to tell our story of salvation in a new way. With charity and confidence, without fear.”

The backlash to Archbishop Gomez’s speech—first on social media and then in Catholic and secular media—was swift. Some criticism was measured and promised honest engagement with Archbishop Gomez’s argument: Archbishop Gomez painted the social movements with too broad a brush (fair). His tone was more forceful that usual (true). He gave short shrift to faithful Catholics working to find common cause with these same movements (also fair).

But this sort of critique of Archbishop Gomez was soon drowned out by a caricature of precisely the dead-end, hyper-polarized, tribal approach to conversations on race that Archbishop Gomez had warned against: Archbishop Gomez was simply tone deaf or ignorant. He was waging a “culture war,” or he was somehow attacking Pope Francis (who had spoken glowingly of certain popular movements recently). Archbishop Gomez was accused of everything from giving aid to white supremacists to playing the stooge for rich conservatives and Donald J. Trump. Motives were imputed.

The unedifying fracas over Archbishop Gomez’s speech is a reminder of how the church’s witness to the world is hampered by our own inability to trust one another, even within the church.

Such reactions only served to make Archbishop Gomez’s point for him: Meeting one another in a spirit of fraternity is made impossible by a harsh, uncompromising and unforgiving approach that reduces everything to politics. These responses reminded me of nothing so much as the knee-jerk, negative reactions Pope Francis regularly receives from some of my more traditional Catholic friends.

The unedifying fracas over Archbishop Gomez’s speech is a reminder of how the church’s witness to the world is hampered by our own inability to trust one another, even within the church. We seem stuck in a negative feedback loop in which each “side” demands dialogue but also demands the right to dictate the terms of that dialogue.

We too easily forget what we have in common. We share a Father; we share a brother in Christ. If we cannot meet one another on that common ground, Christian to Christian, what hope have we to help heal divisions outside the church? If we cannot proclaim Christ to one another, how can we proclaim the Gospel to the world?

About this, surely, Archbishop Gomez was right: “The world needs you and me to be better witnesses. Better Christians. Let us begin by forgiving, loving, sacrificing for others, putting away spiritual poisons like resentment and envy.”

Yes. Let’s do that. And maybe let’s stop waiting for the other “side” to do it first.

For another view on Archbishop Gomez’s speech, read Are racial justice movements straying from Catholic tradition — or are Catholic leaders out of touch?, by Alessandra Harris.

@Stephen_P_White
Show Comments ()
Join the conversation: Login or create an account
Before you can comment, you need to update your profile to include your first and last name, as required in our comments policy. Then reload this page and you'll be set up for commenting. Update your profile