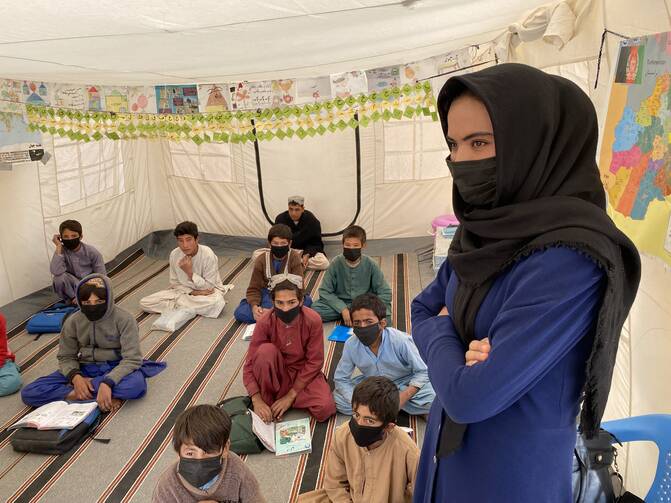 America’s last days in Afghanistan were a spectacle of sorrow, chaos and heroism as U.S. troops scrambled to extract thousands of U.S. citizens and residents and local support staff and their families desperate to escape Kabul. But not all the Americans in Kabul were preparing to leave during those last desperate days in August as the Taliban swept across the country.

Senior staff for Catholic Relief Services, like officers of other overseas relief and aid agencies, hunkered down at home, determined to wait out the transition to whatever would come next. Just weeks after the former Afghan president Ashraf Ghani and other government officials fled the capital, effectively surrendering control of Afghanistan to the Taliban, C.R.S. with its local team members began reopening offices across the country.

Speaking on Nov. 3 from one of those offices in Afghanistan’s third-largest city, Herat, Kevin Hartigan, C.R.S. regional director for the Middle East, Europe and Central Asia, explained that having negotiated the reactivation of female staff with local Taliban officials, C.R.S. has been able to revive suspended programs at 10 sites so far. The restoration of its efforts could not have come at a more critical time, he said.

C.R.S. is beginning an emergency campaign to get food on tables and crops in the field as a hunger catastrophe looms in Afghanistan. “This is maybe the worst, or at least one of the worst, climate-induced droughts in the world,” Mr. Hartigan said, describing conditions in Afghanistan’s Adraskan district and central highlands. C.R.S. is the only Western aid organization on the ground in Adraskan, and Mr. Hartigan became one of the first Americans to visit the district in years. Ironically, it is only because of the end of the war that the gravity of the crisis in this farming region near Herat has finally become clear.

C.R.S. is beginning an emergency campaign to get food on tables and crops in the field as a hunger catastrophe looms in Afghanistan.

“Now that the war is over, the United Nations and the rest of the world has kind of woken up to the fact that the country is in an extremely dire situation,” Mr. Hartigan said. “A lot of these rural areas are essentially emptying out.”

Like other regions of Afghanistan, Adraskan has suffered from chronic drought that became especially acute during recent growing seasons, according to Mr. Hartigan. He described bone dry conditions with water sources and rivers completely dried up throughout the district.

The drought’s impact has been compounded by economic and political chaos in Afghanistan in the wake of the Taliban takeover, a financial crisis that has essentially locked up the nation’s banking system and the impact of the ongoing Covid-19 pandemic. Now the United Nations warns that as many as 23 million people in Afghanistan are facing life-threatening food insecurity as winter approaches.

“Afghanistan is now among the world’s worst humanitarian crises—if not the worst—and food security has all but collapsed,” said David Beasley, the executive director of the U.N. World Food Program, presenting a situation report to the media on Oct. 25. “This winter, millions of Afghans will be forced to choose between migration and starvation unless we can step up our life-saving assistance and unless the economy can be resuscitated.

“Hunger is rising and children are dying,” he said. As many as one million children in Afghanistan are currently at acute risk.

“We can’t feed people on promises—funding commitments must turn into hard cash, and the international community must come together to address this crisis, which is fast spinning out of control,” Mr. Beasely said.

Saving the next harvest season

Mr. Hartigan reports that C.R.S. teams are already on the ground doing what they can in Adraskan and elsewhere.

Just weeks after the former Afghan president Ashraf Ghani and other government officials fled the capital, Catholic Relief Services with its local team members began reopening offices across the country.

“We’ve done some food distributions and fodder distributions to help pastoralists keep their herds alive,” he said. “But we’ve also done a lot of extension work with particularly herder communities and with the farmers to try to help them cope long term with the drier conditions.” C.R.S.’s short-term response will focus on preventing hunger and supplying farmers with seed and materials to allow them to get a winter crop in the ground so that there is a chance that conditions could improve by the next harvest in June.

“They need to plant now, but many of them don’t have any seeds. Their crops didn’t germinate last year, and they don’t have the resources to plant,” he said. “What we are trying to do is inject as much cash assistance into these villages and to these farmer families to basically try to save the farm and make sure people plant a crop this year.”

If the overall humanitarian response is not adequate though, he anticipates that more Afghans will become internally displaced, this time not escaping war but hunger and hopelessness. Mr. Hartigan encountered many “half empty” villages during his assessment of Adraskan, abandoned by farmers now on the road to Iran where they hope to find work as day laborers. Others have already returned from the border, turned back by the Iranians

A report released by Human Rights Watch on Nov. 4 suggests that the international response to the various humanitarian emergencies in Afghanistan is being hampered by the Taliban leaders themselves. “The Taliban’s severe restrictions on women aid workers are preventing desperately needed lifesaving aid from reaching Afghans, especially women, girls and women-headed households,” said Heather Barr, the associate women’s rights director at Human Rights Watch.

“Now that the war is over, the United Nations and the rest of the world has kind of woken up to the fact that the country is in an extremely dire situation. A lot of these rural areas are essentially emptying out.”

The United Nations Office for the Coordination of Humanitarian Affairs recently mapped the agreements between aid agencies and the Taliban in each of Afghanistan’s 34 provinces, showing where female staff members are permitted to function. The document, reviewed by Human Rights Watch, indicates that, as of Oct. 28, Taliban officials in only three provinces had provided a written agreement unconditionally permitting women aid workers to do their jobs.

According to H.R.W. in over half the country, women aid workers face severe restrictions, like requirements for a male family member to escort them while they do their jobs, making it difficult or impossible for them to do their job effectively.

“Permitting women aid workers to do their jobs unfettered is not a matter of agencies or donors placing conditions on humanitarian assistance but an operational necessity for delivering that assistance,” Ms. Barr said.

Continuing the work under the Taliban

According to Mr. Hartigan, C.R.S. has been able to iron out agreements with Taliban officials that allow its local women teachers and other staff members to return to work. Now classrooms are again filling up at C.R.S. education programs in rural communities and camps for people displaced by the war. C.R.S. is educating more than 21,000 children in Afghanistan, including 5,000 inside I.D.P. camps.

“Many of the displaced people in the country have returned home now that the war is over,” Mr. Hartigan said. “But these people are not returning because the drought situation is so bad in the areas that they come from.”

Mr. Hartigan said the Afghan boys and girls C.R.S. serves would otherwise be bereft of primary education. A school for deaf children has also been reopened.

Many of the C.R.S. contacts in the ministries of agriculture and education are the same people from the pre-Taliban government, according to Mr. Hartigan. He adds that in the past, C.R.S. has been able to operate in provinces and districts controlled by the Taliban and had even received security assurances and messages of support for their efforts from the Taliban.

Some $9.5 billion in Afghanistan’s Central Bank reserves are currently frozen in U.S. banks, contributing to the financial crisis in Afghanistan that threatens to exacerbate the suffering this winter.

“They know C.R.S. very well,” Mr. Hartigan said, “and they never interfered with our work.”

Despite the withdrawal of the United States, C.R.S. remains a trusted commodity in Afghanistan, he explained. It has been active in Afghanistan since 2002.

C.R.S. programs in Afghanistan “are actually some of our highest-impact programs in the world,” Mr. Hartigan said, “partly because the need is so great.”

“We're providing education in communities that have never had education before,” he explained, describing the impact as “transformative...for these communities.” Many of the farmers and herders C.R.S. contacts never received outside assistance before, according to Mr. Hartigan. “It's an extremely gratifying place to work and a place where the impact of our work and the return on the investment in terms of that impact is huge.”

The United States could help out more, he suggested, by re-evaluating its posture regarding Afghanistan’s national assets. Some $9.5 billion in Afghanistan’s Central Bank reserves are currently frozen in U.S. banks, contributing to the financial crisis in Afghanistan that threatens to exacerbate the suffering this winter.