‘My gut tells me you can’t negotiate with these people’: Cardinal Dolan has concerns about Vatican-China dialogue 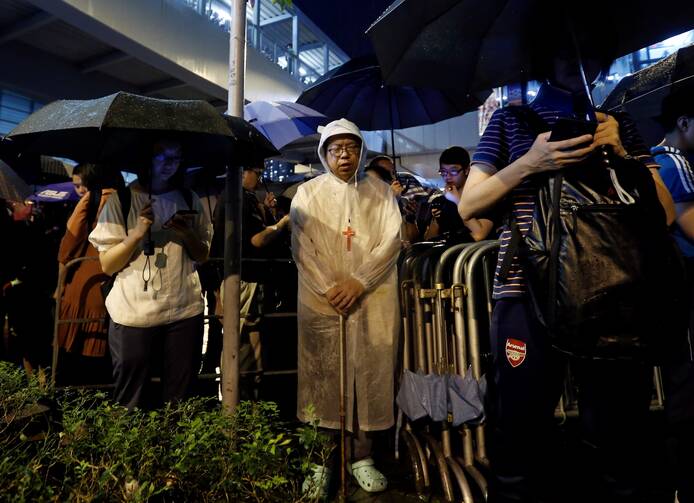 People pray during a Catholic service outside the Legislative Council building in Hong Kong as they protest the extradition bill with China June 11, 2019. (CNS photo/Thomas Peter, Reuters)

The United States is in a new cold war with the People’s Republic of China, one that remains a mostly one-sided affair thus far, as the United States appears unwilling or unable to vigorously engage even as human rights and religious freedom are further degraded by China’s Communist Party leadership. That was the grim assessment of a series of speakers in New York City on Oct. 18 during “Act in Time II: Beijing’s Long Arm: China’s Threat to Religious Freedom & Options for the West,” a conference sponsored by the Anglosphere Society, the Knights of Columbus and the Center for Religious Freedom.

Among the many pessimistic assessments of an accelerating campaign against religion and the treatment of ethnic and religious minorities in mainland China—and the collapse of human rights in Hong Kong—was a warning from former Ambassador at large on International Religious Freedom Sam Brownback, who described the Chinese Communist Party-led government of President Xi Jinping as “evil.” Citing human rights encroachments and advances in surveillance software deployed by the party against its own citizens, the ambassador warned: “The future of oppression will be technological.”

Cardinal Dolan on church dialogue with Beijing: “My gut tells me that you can’t negotiate with these people. It could be extraordinarily counterproductive.”

The U.S. relationship with China is “starting to feel like the cold war again,” he said. He called Mr. Xi a “full-on Mao,” determined to export the China model of state social control around the world. He described that governing model as a socio-political bargain that accepts extreme social control in exchange for economic well-being. “We are at war with China,” he said. “If we don’t stand up [to Beijing], I find myself wondering: Is the world someday going to look more like Kansas or is it going to look more like China?”

New York's Archbishop Cardinal Timothy Dolan, in a conversation moderated by America Media's editor in chief, Matt Malone, S.J., expressed concern with the Vatican’s rapprochement policy with Beijing. He acknowledged that experienced and knowledgeable Holy See diplomats are playing a long game toward an outcome that remains uncertain but wondered if it was naïve to negotiate with Chinese government officials, who seem more bent than ever on eradicating religious freedom in China.

“I’m a loyal member of the church,” he said. “In my gut I want to trust that they know what they are doing and I want it to work.

“The Holy See will always highlight the value of dialogue,” Cardinal Dolan said, adding that dialogue is always preferable to confrontation. And at least under the renewed agreement with Beijing, “the church has a place at the table,” he said. “They have recognized us as having a major role to play in the governance of the church [in China], which we did not have before.”

But, he said, “my gut also tells me that you can’t negotiate with these people. It could be extraordinarily counterproductive.” He recalled a conversation with former Hong Kong Cardinal Joseph Zen, long a critic of Vatican efforts to secure the church’s role in China through engagement with Beijing. “Cardinal Zen told me: ‘Take it from me. This cannot work. They want to exterminate us, and this will expedite that.’”

Complicating efforts to counter human rights abuses in China are commercial ties that have emerged between China and the West in the decades since China was granted most-favored nation status by the United States.

Of those escalating attacks on religious expression in China, “we have to look for the underlying reasons for this,” Cardinal Dolan said. Party leaders “want total control” and detect in religion a competing ideological force they cannot fully contain. He believes faith stands between the party and its ultimate target, China’s families.

“If they can eliminate the church, then they have an inroad into making the family just another agent of the state,” Cardinal Dolan said. Following up on a comment from Ambassador Brownback, that in the end “God will not be denied; communism will fail,” the cardinal worried that the church in the end might be treated with contempt by Chinese Catholics who chose to fight rather than cooperate with the Chinese Communist Party.

A parade of speakers who preceded the cardinal described an expansive campaign of government surveillance in the spiritual lives of China’s Christians citizens, as well as a harder line that could be described as genocidal in its treatment of Tibetan Buddhists, Uighur Muslims and followers of Falun Gong.

“The Holy See will always highlight the value of dialogue,” Cardinal Dolan said, adding that dialogue is always preferable to confrontation.

Among the presenters, in a prerecorded discussion, was Congressman Jeff Fortenberry, a Republican from Nebraska. He argued that U.S. consumers and business leaders “underwrite” a hybrid capitalist-communist system in China that little esteems notions like human dignity, from which human rights and religious freedom derive.

“The corporate industrialists’ abstract notion of free trade empowered manufacturing to move [to China] to take advantage of lax labor laws, of lax environmental standards, government subsidies, direct and indirect, that have actually created an unlevel playing field,” he said. “Free trade economics don’t work unless you have compatible systems.”

U.S. industrial and commercial standards that protect the environment and human dignity translate into a competitive advantage for China, where those standards are lacking or absent, Mr. Fortenberry said. “And we go along with it by buying the cheap stuff.”

The Associated Press reported on Oct. 19 that Mr. Fortenberry has been indicted by a federal grand jury in Los Angeles. He is accused of lying to the F.B.I. and concealing information from federal agents who were investigating campaign contributions funneled to him from a Nigerian billionaire.

The United States and China are world powers “competing for supremacy” across a gamut of economic and political spheres, including an accelerating theater of conflict in cyberspace.

In a YouTube video posted on Oct. 18, Mr. Fortenberry denied lying to federal agents and said he was “shocked” and “stunned” by the allegations, asking his supporters to rally behind him.

Nina Shea, an international human rights attorney who directs the Center for Religious Freedom at the Hudson Institute, described the United States and China as world powers “competing for supremacy” across a gamut of economic and political spheres, including an accelerating theater of conflict in cyberspace.

Beijing “proposes its model of government, which is oppression, to be superior to Western democracies and to offer it to the rest of the world, maybe impose it on the rest of the world,” she said. Ms. Shea explained that Beijing’s handling of the Covid-19 pandemic, a global health crisis which originated in China, has been the example held up purporting the superiority of the China model.

While its suppression of Muslims, Tibetans and Falun Gong adherents has been more brutal, Ms. Shea said, China’s Christians have also had to endure an accelerating campaign against religious freedom and expression. Churches have been demolished, crosses removed and depictions of Jesus replaced by images of President Xi. She finds most alarming recent efforts to rewrite Scripture to more closely align with China’s socialist thought. She described a process that would leave behind a “hollowed out church” in service to the state. On Oct. 15 Chinese officials forced Apple to remove popular Bible and Quran apps from its online store because of alleged violations of government “permit restrictions.”

Cardinal Dolan: “If they can eliminate the church, then they have an inroad into making the family just another agent of the state.”

Ms. Shea said that under Mr. Xi, China may achieve a degree of social control that no longer relies on brute force but can maintain its ideological grip through advances in high-tech total surveillance software. According to Ms. Shea, Beijing is beta testing that capacity in Xinjiang Province, where China has been accused of a gamut of human rights abuses in its decades-long campaign to contain Uighur Muslim separatism, including the use of vast re-education camps, forced labor and forced abortion and sterilizations.

That is a political and high-tech package, she worries, that it could export to other emerging authoritarian states.

Complicating any effort to counter human rights abuses in China, speakers agreed, are the deep commercial ties that have emerged between China and the West in the decades since China was granted most-favored nation status in 2000 by the United States and soon after entered the World Trade Organization. The Covid-19 pandemic has only emphasized the dependency of the United States and other Western powers on China, which has become a manufacturing superpower.

Nevertheless, Ambassador Brownback said the United States has no choice but to “stand up to Chinese aggression.” He said the global economy could withstand any short-term disruptions that might emerge if the United States and the West took a harder line on China, and Cardinal Dolan said he frequently urges U.S. business leaders to raise concerns about religious freedom and human rights with Chinese officials at every opportunity.

Ambassador Brownback said that global public opinion and diplomatic pressure has to be galvanized to confront the continuing violations of human rights in China. He cited the ultimately successful global campaign to protect Soviet Jewry during the 1970s and 1980s as a model for such an effort. Ambassador Brownback suggested that a united, global voice today may be able to move what appears to be a similarly impregnable Beijing to modify its ways on religious freedom and other human rights.