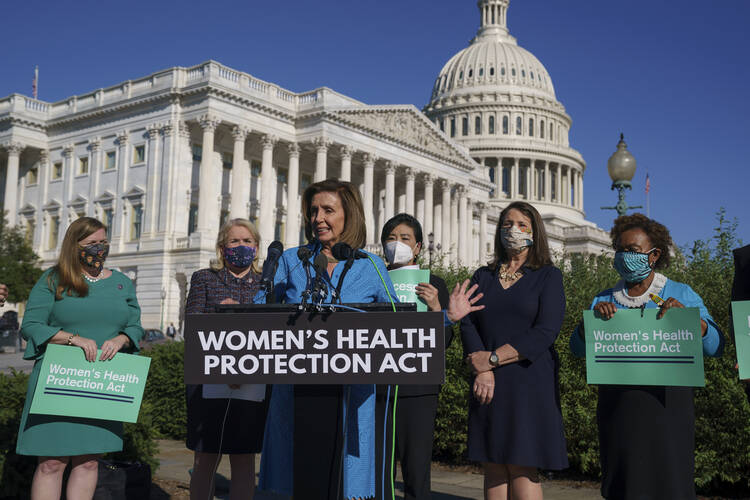 The church’s social doctrine insists, for instance, that Catholics must give special and particular priority to the needs of the poor. But how that focus plays out in terms of which public policies should be supported is a matter of intense but nevertheless good faith debate.

In the same way, there’s no one-size-fits-all Catholic proposal for what a health care system should look like. Some libertarian proposals—such as a totally privatized system to which the poor have almost no access—obviously cannot be considered giving special and particular priority to the poor. Therefore, Catholic legislators who support them find themselves outside the church on a very important pro-life matter.

As long as one could reasonably give the benefit of the doubt to a Catholic legislator authentically wrestling with the teachings of the church, we should respect their consciences as they work through their judgments.

But there are good faith debates to have about, say, the strengths and weaknesses of a single-payer system versus one that has a mix of public and private payers.

As long as one could reasonably give the benefit of the doubt to a Catholic legislator authentically wrestling with the teachings of the church, we should respect their consciences as they work through their prudential judgments.

This is all well and good, some may say, when it comes to matters of economics, but not so much when it comes to policies related to intrinsic evils. But from a Catholic perspective, this is just not so. Even Thomas Aquinas argued (invoking Augustine) that an intrinsic evil such as prostitution might still be made legal if the reasoning behind it balances the multiple goods involved.

But what about abortion? Isn’t this different because it is a matter of justice and civil rights for a vulnerable population?

In one sense, yes, definitely. Prenatal children deserve to be seen as the same as any other kind of human beings by the law. This is a matter of equal justice and about equal justice there can be no compromise. Catholics should support a human life amendment to the Constitution to make it clear that all members of the human family count equally in the eyes of the law.

But in another sense, things are more complicated. Do exceptions in the law for rape and the life of the mother violate this commitment to equal justice? Should there be an exception for the woman’s health? Since all pregnancies affect a woman’s health, to what level of seriousness must a health issue rise to in order to count?

Even if one doesn’t agree with these exceptions, what if they are necessary as a practical matter of politics to get the law passed? Is there any role for engaging an incremental strategy so as to make a more permanent change over time that doesn’t invite an immediate backlash that undoes our accomplishments?

Again, answering these questions requires weighing various values and goods—what in Catholic moral theology is called “prudential judgment.” Again, faithful Catholics can disagree in good faith on these topics, and we should err on the side of respecting their consciences as they work through these prudential judgments.

The bill, passed in response to the recent Texas abortion statute that bans abortion after a heart beat can be detected, given its provisions for the mother’s health, would legalize abortions to be performed up until birth. The U.S. is already one of only seven countries that allows elective abortions after 20 weeks’ gestation, so we already have a wildly extreme abortion policy. If the WHPA passes the Senate, President Biden will almost certainly sign it, and we will lead the world in active hostility to prenatal justice.

Pope Francis reminded us recently in his answer to a question about abortion and excommunication: Abortion, he said, is “homicide,” and “whoever has an abortion kills. No mincing words.” The church is particularly insistent on this issue, according to the Holy Father, “because if it accepts this, it is as if it accepts daily murder.”

It was in that context that he went on to discuss “a person who is not in the community, who cannot receive Communion.” It is not a “punishment” but just an acknowledgment of what is in fact the case.

Abortion is integral to upholding systems that oppress women. That’s why I support the new Texas law.
Gloria Purvis

Francis also rightly emphasized that these matters are pastoral ones and should never be connected to politics. The concern here is not about politics but rather about prenatal justice.

From the perspective of Catholic moral theology and Catholic bioethics, there is no reasonable prudential judgement of conscience with regard to policy that could justify a vote for WHPA. Active support for this bill puts a Catholic legislator—Republican or Democrat—outside the church community on a profound matter of justice.

The pastors of these Catholic legislators, as Francis put it, should be “a pastor for the excommunicated” in this context—but making absolutely sure that “closeness, compassion, and tenderness” are at the heart of their attempts to bring these lost sheep back into the fold.