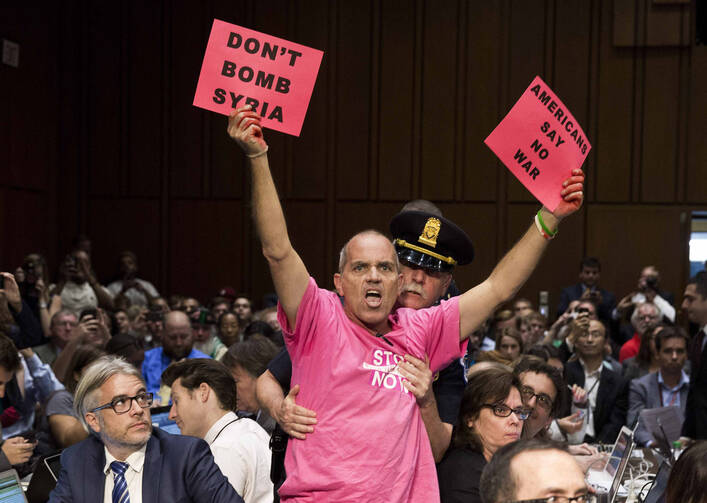 “We believe that there is no ‘just war.’" Those words are at the heart of a statement published on April 14 at the conclusion of an international conference looking at changes in church practice and teaching on non-violence and peacemaking. Organized jointly by the Catholic peace network, Pax Christi International and the Vatican’s Justice and Peace Council, the three-day encounter brought together some 80 theologians and peace activists from conflict zones around the world.

The statement, presented at a press conference in the Vatican, explores the Gospel message of non-violent activism and asks Pope Francis “to share with the world an encyclical on non-violence and Just Peace.” The appeal calls for non-violent practice and strategies to be developed, promoted and taught in all church agencies, seminaries, parishes and educational institutes.

It also calls on the church to “no longer use or teach ‘just war’ theory which recognizes war as morally justifiable"—if a series of criteria can be met. Participants believe that modern methods of warfare make this impossible and that “too often the ‘just war theory’ has been used to endorse rather than prevent or limit military action."

Among those sharing practical experiences of peace making at the conference was Archbishop Jean Baptist Odama of Gulu in northern Uganda. He said, “Any war is a destruction and there is no justice in destruction of life, of property…..so no spending of resources for the destruction of life”

Participants said on the one hand what they’re calling for is a historic change to 1,700 years of church teaching of the "just war" theory. But on the other hand, they stress it’s simply the next step in the direction that popes have been pointing over the past half century since Pope John XXIII wrote his landmark encyclical "Pacem in Terris."

Conference organisers noted the presence of nine members of the Pontifical Justice and Peace Council, including its president Cardinal Peter Turkson, at the conference, saying they believe Pope Francis is opening up “a new space” for such non-violent witness to take root.

As participants head home to the four corners of the globe, they hope this conference will mark a milestone on the road towards putting Jesus’ powerful witness to non-violent peacemaking back at the heart of the church message and mission.