The road to racial justice must also run through Haiti 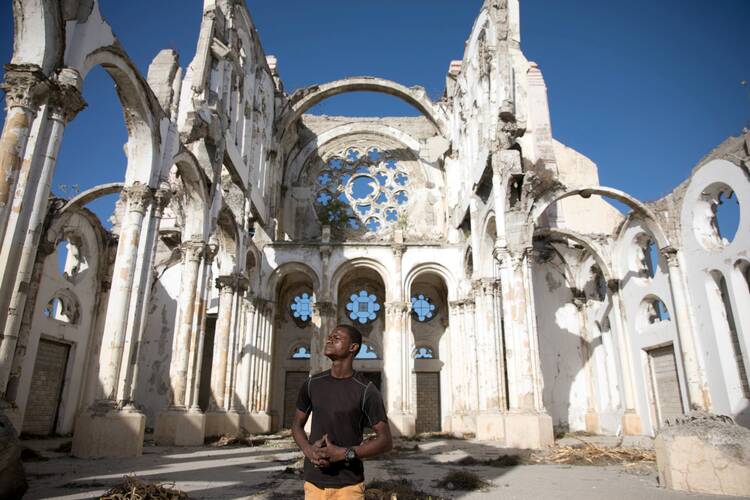 A man stops at the ruins of the Cathedral of Our Lady of the Assumption in Port-Au-Prince, Haiti, on Jan. 10, 2020. The church was destroyed in the 2010 earthquake that killed an estimated 220,000 people and left 1.5 million homeless in the island nation. (CNS photo/Valerie Baeriswyl, Reuters)

From the inequitable loss of life and livelihood caused by the Covid-19 pandemic to obscene public exhibitions of racial injustice, the events of 2020 have held up a mirror. At times, we saw the best of ourselves. But it is also clear that many of us have continually failed to care for others as much as we care for ourselves. That is, we have for too long failed to see others as ourselves. As a result of this failure of recognition, the groups of people who have been left behind rather than lifted up are too numerous to name.

The pain and suffering—including but not limited to the killings of unarmed individuals in our streets—has given us a new lens through which we may apprehend unconscionable injustices. Nearly 160 years after the end of slavery and 60 years after the height of the civil rights movement, we must finally steel our resolve to correct them.

I help lead an institution operating in two countries, the oldest and second oldest republics in this hemisphere, so it is impossible for me not to appreciate how this work necessarily extends beyond our shores and in particular to Haiti—the most impoverished country in our hemisphere, whose per-capita income is tragically more at home with some of the most impoverished nations on the African continent.

It is often overlooked that Haiti is the birthplace of our entire hemisphere. It is where everything we now know as the Americas, for better and for worse, began in 1492, when Columbus established the first European settlement near what is now the port city of Cap-Haïtien. Haiti was also the first nation to throw off the shackles of slavery, a full 60 years before the United States did.

Haiti was the first nation to throw off the shackles of slavery, a full 60 years before the United States did.

An auspicious beginning, however, does not guarantee a bright future. European powers, as well as the newly minted United States of America, quickly took steps to marginalize Haiti after it gained independence from France in 1804. Blackness, never mind a nation freed and led by formerly enslaved people, was a threat. The economic success of the United States relied on the oppression and exploitation of Black bodies, and President Thomas Jefferson imposed an embargo on trade with the independent nation. The United States would not formally recognize Haiti until President Lincoln sent a diplomatic representative there in 1862.

Similarly, France did not recognize the country until 1825, and only after Haiti agreed to pay 150 million francs, the equivalent of $21 billion today, to compensate former slaveholders for their “loss of property” during the Haitian Revolution. (For comparison, Haiti’s current annual gross domestic product is just $8.5 billion.) As France made its demands, its warships in Port-au-Prince harbor served as an uncomfortable reminder of Haiti’s new chains.

For the next 200 years, the world’s relationship with Haiti generally ranged from neglect to outright abuse. More recent international support has not been nearly enough to put Haiti back on an equal playing field after centuries of marginalization.

Today, the state of the largest majority-Black country in our hemisphere is disturbingly analogous to the state of Black lives in the United States, where the net worth of a typical white family is nearly 10 times the net worth of a typical Black family. The average G.D.P. per capita of countries in the Western Hemisphere is just over $29,000, dwarfing Haiti’s GDP by a factor of 34.

Today, the state of the largest majority-Black country in our hemisphere is disturbingly analogous to the state of Black lives in the United States.

As the Biden administration takes shape, there are several things that the United States and the international community can do for Haiti to ensure that the issue of racial justice is being addressed both at home and abroad.

First, give it historical recognition. Give Haiti credit for what it has accomplished in being first country to abolish slavery in the 19th century. Part of continued progress for Black lives means decolonizing the narrative of progress itself. It means reminding the world that slavery was ended first by Black people in Haiti.

Second, the U.S. government (and France, too) should see it as a moral imperative to help bring Haiti in from the margins. Fortunately, the United States has a capable and committed leader on the ground in the current U.S. ambassador, Michele J. Sison, and Haitians are eager to build a just and prosperous country for themselves and their children.

The ambassador should be given the resources she needs to be of service to the Haitian government so that the Haitian government can in turn be of service to its people. If the international community is looking for a starting point, a 10-year program to underwrite a national budget truly capable of supporting an 11-million person country, as my colleague Deacon Patrick Moynihan argued five years after the devastating earthquake of 2010, would create the institutional growth necessary for Haiti to become a thriving, independent nation.

Finally, for all foreign charitable organizations working in the country (and the donors who fund them), education must be the top priority. Haiti needs upstream solutions, not saviorism. It is illustrative to consider that enslaved people were given housing, as deplorable as it was, and access to food and in some cases even medical care—but not education.

Investments in education ensure a brighter future built by and for Haitians themselves. I know this firsthand from my experience helping to lead The Haitian Project, which supports Louverture Cleary School, a top-quality, tuition-free, Catholic secondary boarding school in Haiti. Our graduates, who come from families struggling on less than $1,000 a year, earn an average salary of $12,500. Crucially, 90 percent remain in Haiti to build the local economy and institutions.

The need for racial justice to travel across borders to Haiti and beyond is not a new phenomenon. In 1851, Henry Clay, a Southern politician, wrote the following in support of U.S. recognition for Haiti:

The slave-lords ruled in our legislative halls, and dictated our National policy—foreign as well as domestic; and it was fated that the race which plays so tragic a part in our own history, should be everywhere wronged and despised by the American Republic.... And it will be evidence that we are really entering on a dispensation of purity and justice, if Congress proceed [sic] to right this ancient wrong, so far as it can, by receiving into the kinship of nations these two republics.

Clay was a conflicted man who owned slaves even as he decried the evils of slavery and the marginalization of Black nations around the world.

After 200 years, it is no longer time to be conflicted. It is time to move forward. 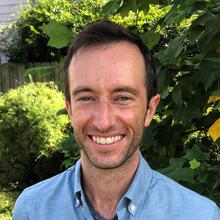 Colby Bowker is the vice president of The Haitian Project Inc., a Catholic mission project that supports Louverture Cleary School in Haiti.