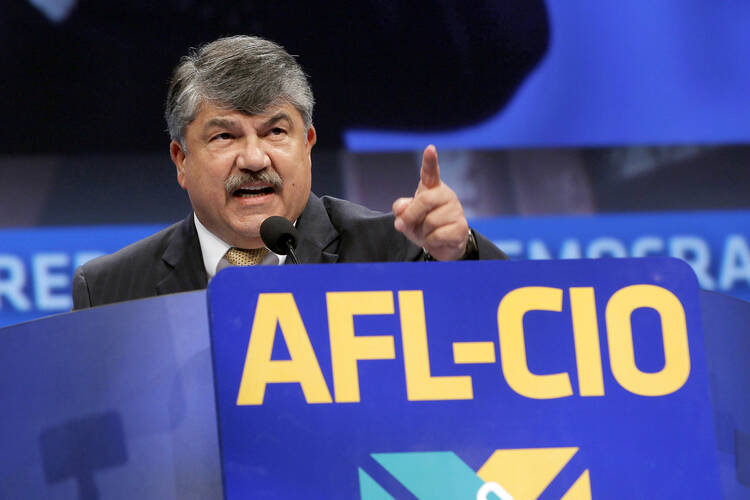 WASHINGTON (CNS) -- Richard Trumka, 72, president of the AFL-CIO since 2009 and the labor federation's secretary-treasurer for 14 years before that, died Aug. 5 of a heart attack.

The faith of Trumka, a Catholic born to a Polish father and an Italian mother, helped shape a lifelong career in the labor movement.

The church "also taught me that we have to help others," he added. "In this position I have more of an opportunity to help people get ahead and get a fair shake, to get a job, to get fair treatment, than I would have anywhere else. And that's exciting."

Trumka led the 12.5-million-member AFL-CIO through more than a decade of difficulties, as the percentage of U.S. workers represented by unions continued a slow but steady erosion. Those who were in unions frequently faced unresponsive employers -- and workers who organized for union representation faced hostility and threats of firing and job loss.

He hosted a number of symposiums on labor issues at AFL-CIO headquarters in Washington. Catholics who appeared as panelists included Cardinal Donald W. Wuerl, the now-retired archbishop of Washington, as well as John Carr, founder and currently co-director of the Initiative on Catholic Social Thought and Public Life at Georgetown University, and political writer Melinda Henneberger, then anchor of the "She the People" women's blog at The Washington Post.

Since the start of the coronavirus pandemic in March 2020, Trumka had issued a statement as part of a "Daily Brief" emailed each weekday by the AFL-CIO. In his Aug. 4 message, the last issued before his death, he focused on the federal Centers for Disease Control and Prevention's extension of a moratorium of evictions.

"I applaud the CDC for taking action. And I urge Congress to pass legislation that extends the moratorium. During a pandemic, people should not be worrying about keeping a roof over their heads," Trumka said.

‘I believe the Catholic Church—my church—ought to be a leader in human rights, which include workers' rights,’ Trumka told CNS.

"I especially want to recognize the leadership of Rep. Cori Bush (D-Mo.), who organized lawmakers and activists for five days on the steps of the Capitol. She pushed Congress and the nation to see the struggle of people who are currently unhoused or facing eviction."

Trumka frequently wrote about the Protect the Right to Organize Act, or PRO Act, which would allow workers to organize without employer interference. A similar bill 11 years ago, the Employee Free Choice Act, did not survive a threatened filibuster.

On organizing, "I believe the Catholic Church -- my church -- ought to be a leader in human rights, which include workers' rights," he told CNS, adding that church institutions shouldn't engage in "outrageous conduct" such as harassing workers who want to organize.

"I would hope the Catholic Church would be the living, shining star of the best practices," added Trumka, who wrote an occasional column for CNS.

Born into the third generation of coal miners in Pennsylvania's coal country, Trumka worked in the mines himself, but went to college and law school. By 1982, he had ascended to the presidency of the United Mine Workers at the age of 33.

Trumka led a successful eight-month strike against the Pittston Coal Co. by encouraging striking miners and their allies to engage in nonviolent civil disobedience to confront the company and win public support.

"He wasn't just a great labor leader, he was a friend," President Joe Biden was quoted as saying at a White House event late July 5. "He was someone I could confide in. You knew whatever he said he'd do, he would do," he added, according to an NPR story.

Biden said Trumka died of a heart attack while on a camping trip with his family, NPR reported.

Trumka once said church should be 'a refuge against injustice, a flesh-and-blood sanctuary.'

Despite his national profile, "Rich took a keen interest and always answered the call when needed" on local labor issues and statehood for the District of Columbia, said an Aug. 5 statement from Dyana Forester, president of the Metropolitan Washington AFL-CIO.

"Richard Trumka was shaped by his Catholic faith," said an Aug. 5 tweet from Dylan Corbett, founding director of the Hope Border Institute and a former staffer of the U.S. bishops' Catholic Campaign for Human Development. "He often talked about how his dad was chased through the woods and up the stairs of a church by union busting cops where a priest saved him. He said church should be 'a refuge against injustice, a flesh-and-blood sanctuary.' RIP."

"What a loss. A powerful voice for the dignity of workers. A Catholic who embodied the values of Catholic teaching on living wages, unions and a just economy," said an Aug. 5 tween from John Gehring, Catholic program director of Faith in Public Life and author of "The Francis Effect."

"Trumka was a champion for workers' rights and a passionate leader of the labor movement," said an Aug. 5 statement from John Schmidt, vice president of the Economic Policy Institute, for which Trumka was chair of its board of directors. "His legacy will not be forgotten as together we navigate the critical challenges facing America’s workers and build an economy that works for everyone."

"The entire labor movement today stands together in solidarity as we reflect on his life and legacy, said Richard Lanigan, president of the Office and Professional Employees International Union, in an Aug. 5 statement about Trumka.

The fight to unionize Amazon is the most important labor story of this century
John W. Miller

"We are thankful for all he accomplished on behalf of working people, particularly recently as he nimbly guided the labor movement through an extremely politically divided time, all the while keeping the movement united in the fight for the future of all working people," Lanigan said. "We are committed to upholding his powerful legacy and the fight for dignity and respect for all."

"Richard was a transformational leader within the labor movement. He spent decades advancing the work of organizing, and took monumental steps to further diversity, equity and inclusion efforts within the AFL-CIO," said a Aug. 5 statement by Kyle Bragg, president of SEIU Local 32BJ.

SEIU, the Service Employees International Union, is the largest union of workers in health care, the public sector and property service.

"Richard Trumka helped to vastly improve the lives of millions of working families," said Bragg. "His legacy will live on through the power of the labor movement he leaves behind."