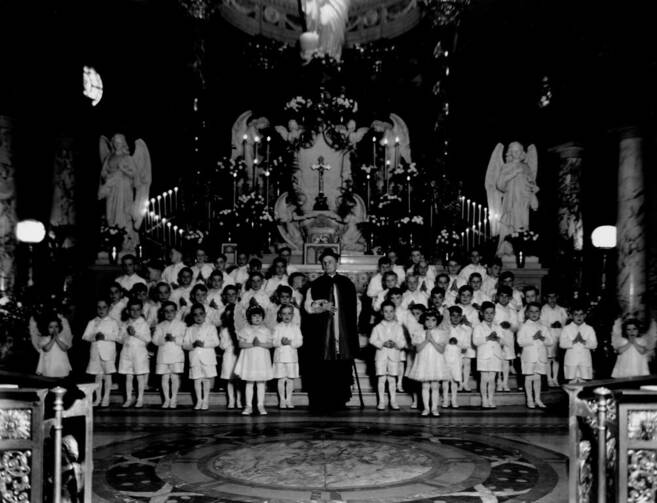 Father Baker at Our Lady of Victory National Shrine and Basilica

July 29 marks the 85th anniversary of the death of the Venerable Msgr. Nelson H. Baker (1842-1936), or simply “Father Baker” as anyone familiar with his life and legacy would say. A priest from Buffalo, now a candidate for canonization, Father Baker spent 60 years caring for the orphaned, poor, sick and migrants. In his own lifetime, it is estimated that he housed 100,000 children, and the adoption ministry he ran is still going strong 170 years later. In addition, he built a magnificent basilica dedicated to Our Lady of Victory. His 60 years of ministry are an example of hope and faith, of unbound charity and of the fruits of ceaseless prayer.

America covered his work back in 1936, a few months before his death, but his life is worth a closer look now, as it is poignantly pertinent to our moment in time. I grew up in the parish once led by Father Baker, and a number of lessons from his life stand out to me more now than perhaps ever before. A veteran of the Civil War, Father Baker became a highly successful businessman in Buffalo, N.Y., before entering Our Lady of Angels Seminary in 1869. So what lessons can we draw from an American priest who has been gone to God for nearly a century, and whose life seems so very distant from our own?

1. Where there is a need, Christians must provide.

Father Baker was ordained a priest for the Diocese of Buffalo in 1876. He was immediately assigned as assistant to the failing St. Joseph’s Orphanage and St. John’s Protectory in Limestone Hill, N.Y. Baker saw the venture, which was deeply in debt, as a floundering enterprise of the church and requested reassignment. He returned after only one year away, this time as superintendent, and would build his famed “City of Charity” over the ensuing six decades.

In addition to the orphanage, parish and protectory, Father Baker added a primary and secondary school, a maternity hospital, a school for nurses, a 275-bed general hospital, a fully operational farm—15 buildings in all dedicated to ministry.

Father Baker’s 60 years of ministry are an example of hope and faith, of unbound charity and of the fruits of ceaseless prayer.

2. There is power in the people in the pews.

When Father Baker took over the failing orphanage and protectory in 1882, he deployed his business acumen to set the accounts to rights. The debts had been growing exponentially each year under his predecessor, and the number of children being left in his care was growing in a similar fashion. In order to solve this problem and satisfy the outstanding debts, Father Baker wrote to postmasters across the United States asking for the names and addresses of local Catholic women. In writing to them, Baker asked that they join The Association of Our Lady of Victory for 25 cents a year, which entitled the members to spiritual benefits for their support of the children in Father Baker’s care. The association, still around today, was the first direct-mail campaign in the United States and provided Baker with the necessary support for his ministries.

By the turn of the century, Father Baker, with the assistance of the Sisters of St. Joseph and the Brothers of the Holy Infancy, was caring for hundreds of children. Children often arrived in Buffalo at the train station, alone, with a sign around their necks that simply said “Father Baker’s.” Children in his homes came from all states and territories of the union and several countries.

Despite all that was already happening at Limestone Hill (now Lackawanna, N.Y.), Father Baker could not shirk what he felt as his duty to help those in need when an opportunity presented itself. In the early 20th century, Buffalo’s newspaper readers were scandalized by reports of bones of infants and toddlers being dredged up in the canals—the supposition being that these were the children of families that were either ashamed of an out-of-wedlock birth or that the family’s poverty was too great to care for another child.

Baker’s response was swift. He opened a home for pregnant mothers and accepted any infant that any mother felt was better left in the care of his home. Soon hundreds of infants and pregnant women found shelter and privacy at Father Baker’s homes. There are stories of Father Baker even sleeping in a chair so that a pregnant woman might have his bed to sleep in.

Children often arrived in Buffalo at the train station, alone, with a sign around their necks that simply said “Father Baker’s.”

4. Fight for equality for all God’s people.

During the Great Migration of the 1920s, millions of Black Americans migrated from the southern United States to the North. Many of these individuals made their way to Buffalo, N.Y., then a hub for steel production and shipping.

In response to these new residents, who were frequently in between housing arrangements because of housing shortages, lack of access to capital and, undoubtedly, prejudice, local officials strove to keep them moving. Soon, police were instructed to begin arresting Black migrants under vagrancy laws. To combat this, Father Baker personally rented homes and apartments for these migrants so as to avoid these charges.

But Father Baker saw an opportunity and began the official Black Apostolate of the Diocese of Buffalo. Regardless of the prejudices of his time, Father Baker knew what was right—that all souls are equal before God.

When the Great Depression struck in 1929, Father Baker was already 87 years old. And yet he mobilized his institutions. He used his trade schools as an opportunity to bake fresh bread for the men standing in line for food, to fix shoes, mend clothing and provide other necessary services; distributed alms; provided free medical care and education to those who could not afford it; and even helped neighbors cover heating bills during the brutal winter months.

Regardless of the prejudices of his time, Father Baker knew what was right—that all souls are equal before God.

One story from the Depression years is particularly striking. As men stood in line awaiting a loaf of bread and a bowl of soup, Father Baker’s assistants would hand out nickels and dimes. But if you could get to Father Baker, you would likely get a dollar. Some men, seeing Baker was half-blind, half-deaf and in the early stages of senility, would receive the dollar and then run to the back of the long line in hopes of securing a second dollar from Father Baker. When his assistants pointed this out, Father Baker reportedly replied: “You think I haven’t noticed? But when I stand in judgment, do you think I will be asked if I thought they were worthy of charity, or do you think I will be asked if I gave?”

It was not until 1916 that he proposed his most ambitious building project, the crown jewel in his city of charity: Our Lady of Victory Basilica.

During the construction years, between 1921 and 1926, Baker employed Italian, German, Polish and French artisans as well as local contractors. He imported over 40 types of marble to create a baroque, rococo basilica near the industrialized shores of Lake Erie—a gleaming white beacon shrouded in the smoke of steel mills. When consecrated in 1926 by Bishop William Turner and Cardinal Patrick Hayes of New York, the entire project, costing roughly $3.2 million, had already been paid for through the donations of the members of The Association of Our Lady of Victory.

It would be here that Father Baker was eulogized a decade later, after his death on July 29, 1936. In the ensuing days, between the memorial Masses and the De Profundis filling the air inside Our Lady of Victory Basilica, nearly half a million people would travel from across the United States and Canada to view the body of “The Little Man of God.” Pope Pius XI expressed his condolences to the people of the Diocese of Buffalo, and Franklin Delano Roosevelt did the same. The requiem Mass for Father Baker was broadcast by the BBC.

He built a community in which the value of life and faith were the central points around which all else revolved.

Our Lady of Victory continues to be a source of inspiration, community and prayer for the tens of thousands of individuals who visit there every year.

While Father Baker never took credit for his own work, attributing all success to the intervention of Our Lady of Victory, those who knew him and knew those he helped have sought to honor his life of faith and ministry. In 1987, the Diocese of Buffalo submitted Father Baker’s cause of canonization to the Holy See, and in 2011 Pope Benedict XVI recognized Baker’s heroic virtue, elevating him to the rank of Venerable.

There seems to be hardly any ministry that Baker did not undertake in his lifetime: caring for the orphaned, the widowed, the pregnant, the sick, the elderly, praying with striking workers, welcoming African Americans as part of the Great Migration, welcoming immigrants from the Middle East, burying the dead, instructing the ignorant. He built a community in which the value of life and faith were the central points around which all else revolved. Even today, O.L.V. Charities and O.L.V. Human Services still care for troubled youth, pregnant mothers, the orphaned and those facing emotional, physical and behavioral challenges and oversee extensive social ministries.

At the time of Baker’s death in 1936, the editors of Americasummed up his life and the inspiration we can each draw from it rather succinctly: “We cannot be what he was, but as we look at him we feel that we can be better than we are, more zealous for the interests of God’s poor, more self-sacrificing in helping those who come to us.”