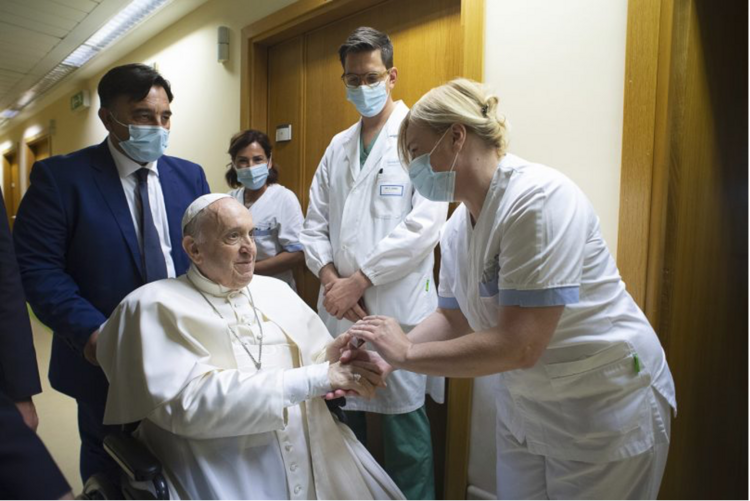 Pope Francis is greeted by hospital staff July 11, 2021, as he sits in a wheelchair inside the Agostino Gemelli Polyclinic in Rome, where he was hospitalized for intestinal surgery. (Vatican Media via AP)

(RNS) — In a recent column, I made the fairly obvious point that Pope Francis, an 84-year-old man, wasn’t going to be with us forever. The response made it obvious that many Catholics and others hadn’t thought much about this evident fact, and prompted another, less obvious — but more urgent — point: Church law has not kept up with how we humans die these days.

One of the most difficult conversations children need to have with their elderly parents is about medical decisions that will need to be made when a parent is seriously ill and unable to make decisions on his or her own.

This conversation should not be postponed until the parent or grandparent gets sick. It should be held long in advance, when it can take place in a calm and peaceful context — and before a sudden and unexpected stroke or accident forces the issue.

For the good of the church, the pope needs to clear up the uncertainty by signing a durable power of attorney that specifies who makes medical decisions for him if he is unable to make them himself.

If the parent leaves clear instructions on what they want or who decides, the family is more likely to accept the decisions peacefully. But if there are no instructions, a family can be torn apart by arguments in the hospital over how to care for a sick or dying parent.

The same is true for the Holy Father in the family we call the Catholic Church.

Since the pope has no wife or children, he needs to designate someone who can make these decisions for him, and the rest of the church needs to know who this is. Otherwise, arguments over his treatment can divide the church for decades, even after his death.

The authority is sweeping: “I give my agent full power and authority to make health care decisions for me, including the right to consent, refuse consent, or withdraw consent to any care, treatment, service, or procedure to maintain, diagnose, or treat a physical or mental condition.”

Vatican officials have an inherent conflict of interest when dealing with a dying pope.

In most countries, if you do not sign such a document, doctors will look to your closest relative for instructions if you are unconscious. For Francis, that would be his only living sibling, María Elena Bergoglio, who lives in Argentina and is 73 years old.

Would she be responsible for making decisions or would the secretary of state, the highest official in the Vatican? There is no Vatican legislation covering this contingency.

For the good of the church, the pope needs to clear up the uncertainty by signing a durable power of attorney that specifies who makes medical decisions for him if he is unable to make them himself. He may have secretly done this already, but to avoid conspiracy theories (“It is a forgery!”), he needs to make this decision public while he is still functional and lucid.

Who should the pope appoint? If not his sister, then preferably a nephew, niece or longtime friend who does not work in the Vatican.

Vatican officials have an inherent conflict of interest when dealing with a dying pope. Conspiracy theorists would claim either they want to keep him artificially alive while they run the church or they wish him dead quickly so one of them can get elected pope.

Whoever is appointed as his agent should have no other agenda than the good of Jorge Mario Bergoglio, who happens to be pope.

Whoever is appointed as his agent should have no other agenda than the good of Jorge Mario Bergoglio, who happens to be pope.

Besides the durable power of attorney, it is also possible to instruct your agent on what type of care you desire. These instructions are sometimes called a living will.

For example, the one I signed indicates “I do not want my life prolonged if (1) I have an incurable and irreversible condition that will result in my death within a relatively short time, (2) I become unconscious and, to a reasonable degree of medical certainty, I will not regain consciousness, or (3) the likely risks and burdens of treatment would outweigh the expected benefits.”

The alternative box, which I did not check, says, “I want my life prolonged as long as possible within the limits of generally accepted health care standards.”

The church needs clarity and certainty during a papal medical crisis. Anything else could severely divide the church.

Nor did I check any of the boxes indicating the specific life-sustaining treatments to be used if “I am persistently unconscious or there is no reasonable expectation of my recovery from a seriously incapacitating or terminal illness or condition.” These included artificial nutrition and hydration, surgery, cardiopulmonary resuscitation, antibiotics, dialysis, respirator, chemotherapy or radiation.

This kind of specificity is needed to guide doctors and to keep children from fighting in the hospital over what medical treatment to give their parent.

Likewise, many in the church would argue over what treatment is appropriate for a person, let alone the pope, in these conditions. Some believe, for example, that artificial nutrition and hydration (tube feeding of food and water) are morally required even when a person is persistently unconscious with no hope of recovery. Others believe that, under these circumstances, these are extraordinary means that simply prolong dying.

Who will make these decisions for an incapacitated pope, or for that matter, a retired pope?

Francis and Benedict need to take action now so there is no confusion when they are incapacitated. Each needs to appoint an agent to make decisions about their medical care and they need to give clear instructions on the kind of care they want.

The church needs clarity and certainty during a papal medical crisis. Anything else could severely divide the church.