Common ground in the abortion debate is obvious: Support mothers. 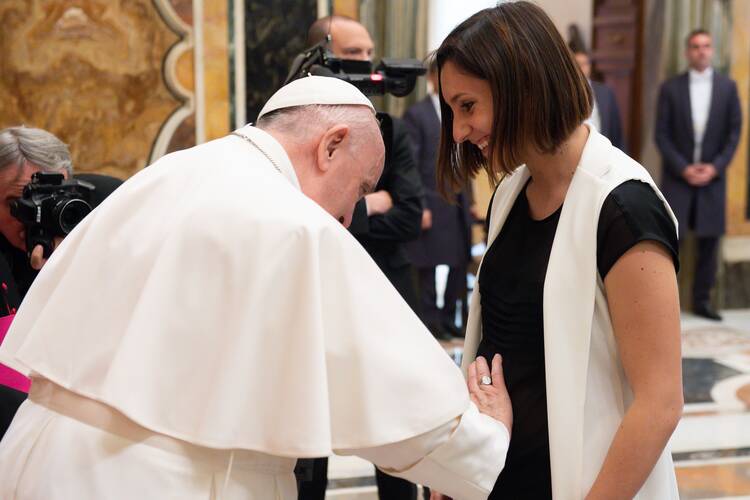 Pope Francis touches a pregnant woman's womb during an audience with representatives of "Progetto Policoro," an employment initiative of the Italian bishops' conference, at the Vatican June 5, 2021. (CNS photo/Vatican Media)

(RNS) — The past couple of months have been difficult ones in the Catholic Church. No sooner had the Supreme Court decided to take up legal challenges to Mississippi’s 15-week abortion ban than the U.S. bishops’ June meeting exposed the wrestling that had been going on in the conference about abortion politics, unity in the church and the meaning of the Eucharist since the election of President Joe Biden.

Both pieces of news signal a long and difficult year ahead for the abortion debate in the United States. In a country already struggling with deep fractures in its unifying foundation, a massive cultural fight over the mother of all polarizing issues is frightening to consider.

But it need not be. Indeed, common ground on abortion is staring us right in the face.

I mentioned in last month’s column that Gallup consistently finds a majority of Americans support legal abortion before 12 weeks of gestation, but that a supermajority want abortion mostly illegal after week 12. This was confirmed again by an Associated Press poll this past week.

Common ground on abortion is staring us right in the face.

Here is the obvious common ground on the “supply” side of the abortion debate. Though majorities say they support Roe v. Wade, they do not actually support current abortion law in the United States (actually a product more of Planned Parenthood v. Casey than Roe), which currently doesn’t allow for restrictions before about 22 weeks. Americans seem to want a much more pro-life abortion policy — something close to the 12-week threshold in Finland and Denmark.

The objection is that the U.S. doesn’t have the social supports for mothers and families that these countries have. If we did, we could afford to have more restrictive laws.

For what it’s worth, I happen to think the standard established in Casey that abortion restriction could not place “undue burden” on women makes little sense without thinking about the level of social support. Regardless, there is also obvious common ground to be had on the “demand” side of abortion as well — the need to take care of the babies who would be born to women who now choose abortion. Pro-lifers and pro-choicers should both want to help women and families be in a place to choose to have another child.

Millions of pro-lifers who identify as Democrats or independents are already open to using government to focus on the demand side of the abortion issue. But as I mentioned in my January column, the GOP is slowly putting aside its libertarian past and evolving into a party that favors government support for women and families.

Pro-lifers and pro-choicers should both want to help women and families be in a place to choose to have another child.

The most recent “Solidarity Republican” to do this is U.S. Rep. Jeff Fortenberry of Nebraska. This past week a Washington Post column argued in support of his new “Care for Her Act” — a bill that would make caring for a pregnant woman and meeting her needs a “centerpiece of public policy.” Among other things, the law would:

The Post article notes that some Republicans might balk at a child tax credit that costs more than $20 billion annually. Fortenberry’s response to this concern is that investing in the health of mothers and children is simply the right thing to do.

Significantly, Fortenberry also said he hopes his proposal can transcend our current politics of division by “going to the essence of solidarity and belonging.”

Supporting mothers is just such obvious common ground in the abortion debate, one wonders why it hasn’t already been achieved.

Supporting mothers is just such obvious common ground in the abortion debate (and in our polarized culture at large), one wonders why it hasn’t already been achieved. The reasons are undoubtedly complex and interlocking, but a major part of the story is the way national politics has taken up the God-shaped hole in our hearts.

As former Illinois Democratic Congressmen Dan Lipinski said in a recent interview with The Pillar, secular politics has become a religion — complete with sets of doctrines that may not be questioned. Indeed, Americans increasingly do not define themselves positively with a coherent vision of the good, but rather by opposition to the other.

That is, one’s identity is so caught up in opposition and hate that the prospect of finding common ground with one’s perceived enemy seems impossible.

And, let’s face it, it isn’t easy to dialogue and plan and strategize with someone who has diametrically opposed views to our own on important issues. But in such situations it is important to tie ourselves to the practices of “Jesus Forsaken” and work to build unity across difference, despite its difficulty.

We must do this not just because Jesus prayed for unity before he died, but because the lives of women and children depend on us doing so.

Charles C. Camosy
@CCamosy
Provide feedback on this article
Join the conversation: Login or create an account
Before you can comment, you need to update your profile to include your first and last name, as required in our comments policy. Then reload this page and you'll be set up for commenting. Update your profile