Catholics: Embrace being ‘woke.’ It’s part of our faith tradition. 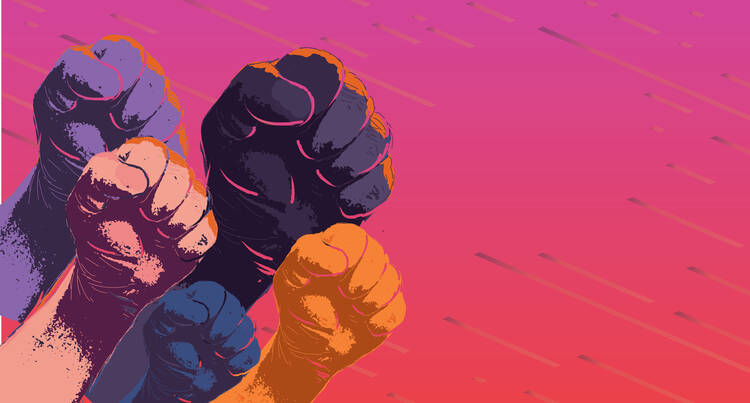 Mocking the term “woke” has become an easy way to dismiss an issue or argument as exaggerated, superficial or ostentatious. Black Americans originally popularized the term to describe an awareness of racism and social injustice, but it has been muddled by overuse in political jargon. The political right, in turn, has sought to weaponize it. For example, in the Catholic magazine The Crisis, Jonathan B. Coe made the accusation that “the Woke...have taken God off the throne of their hearts and minds and put themselves there. Instead of being submitted to a divine metanarrative (e.g., Scripture and Tradition), they are submitted to their own narrative.”

The broad repudiation of “wokeness,” however, violates a model of moral praxis affirmed in the Catholic tradition: the pastoral cycle, or “see-judge-act.” The concept of the pastoral cycle has always been implicitly present in our faith tradition, but St. Pope John XXIII formally recognized it in “Mater et Magistra,” thanks to the influence of Cardinal Joseph Cardijn, the founder of the Young Christian Worker movement, and the liberation theologians of Latin America. He wrote, “First, one reviews the concrete situation; secondly, one forms a judgment on it in the light of…[social] principles; thirdly, one decides what in the circumstances can and should be done to implement these principles” (No. 236).

The broad repudiation of “wokeness” violates a model of moral praxis affirmed in the Catholic tradition.

This approach directs us to invoke our faith principles in a given situation only after we have immersed ourselves in the embodied experience of our neighbors, especially those who have been made vulnerable. Whatever problems may be inherent in the concept of wokeness—David Brooks, for example, has argued that woke people prioritize the appearance of solidarity rather than practical action—it is fair to say that developing an awareness of the reality of our neighbors is relevant to the first step of the pastoral cycle: seeing.

Issues like climate change and systemic racism are labeled pejoratively by the political right as part of a “woke” agenda, but those concerned about such things have identified real and present threats. There is overwhelming evidence that climate change is human-induced and must be curtailed. Huge majorities of Black and Indigenous Americans tell us that systemic racism corrupts our institutions, and statistical data reflects this. If the woke are overly concerned with perception, the “unwoke” have failed to perceive at all.

To be sure, there are some issues where this dynamic is reversed. Affirming the dignity of the unborn comes readily to mind: The reluctance on the part of many on the political left to explicitly recognize that dignity is a grave moral oversight. Whatever side of the aisle we find ourselves, it can be tempting to accuse political opponents of being insufficiently aware of reality, or to weaponize wokeness (or “unwokeness”) as a way of pushing through policies that respond to a superficial understanding of an issue. For example, we might insist on particular measures to reduce carbon emissions without concern for the people who will may lose their jobs in the process, or demand prohibitions on abortion that we assume will protect the unborn, despite studies indicating that better financial and social support for mothers is more effective at curbing abortion rates. Failing to recognize such realities can distort our evaluative framework and make dialogue impossible.

When we skip the “seeing” step of moral engagement, we ensure that our actions never will respond sufficiently to a given issue.

Our faith requires more from us. It is not enough to give the appearance of solidarity or to consider an issue from only one perspective. Our political and moral lenses should not inhibit us from seeing the world through the eyes of the vulnerable—even, or perhaps especially, when doing so challenges our dominant worldview. We are called to seek out diverse and marginalized viewpoints, observing the complexities of human life in addition to studying empirical data. Rather than clinging determinedly to our own convictions, we should immerse ourselves in the experience of our neighbors.

When we skip the “seeing” step of moral engagement, analyzing situations from a predetermined perspective or proposing solutions without first immersing ourselves in the experience of the vulnerable, we ensure that our actions never will respond sufficiently to a given issue. Sarah Sunshine Manning, the director of communications for the NDN Collective, an advocacy group for Indigenous people, gives a pointed example:

How can policy makers respond to the epidemic of missing and murdered Indigenous women, to police brutality against Native Americans, to youth suicide in tribal communities, to poor mental health, to negative outcomes in education for Native youth, to fights for tribal sovereignty and fights against environmental racism, when Indigenous People are not even on their radar?

We could ask similar questions about any social issue of our time. How can policymakers adequately restructure our immigration system when climate change, which is already a prominent driver of migration and is likely to displace hundreds of millions more of our neighbors in the near future, is not even on their radar? How can we respond adequately to abortion without affirming the dignity of all life and challenging the patriarchal and racist social structures that perpetuate it?

If we refuse to awaken to the realities of our neighbors—to truly see the other—then our application of moral principles always will be based on hypothetical reasoning that overlooks present harms. And this contributes to our collective inability to have nuanced discussions about adequate responses to social issues. Only when we are grounded in the shared reality of human experience will our public discourse be productive. Only when we are working from similar premises can we accommodate diverse judgments about appropriate action. And this is what wokeness, when approached with humility, should encourage.

Catholics should lead the way in this: Theological principles help us to interpret the world, but our first step always should be to see what is going on, through the eyes of the vulnerable. By continuously engaging the movement of the pastoral cycle, Catholics can overcome the “woke” divide. Our faith compels us to seek the common good, and this demands a commitment to ensuring that our opinions are based on objective reality and formed according to the principles of our faith. It demands that we live our lives for love of our neighbors. But first, we must see them.