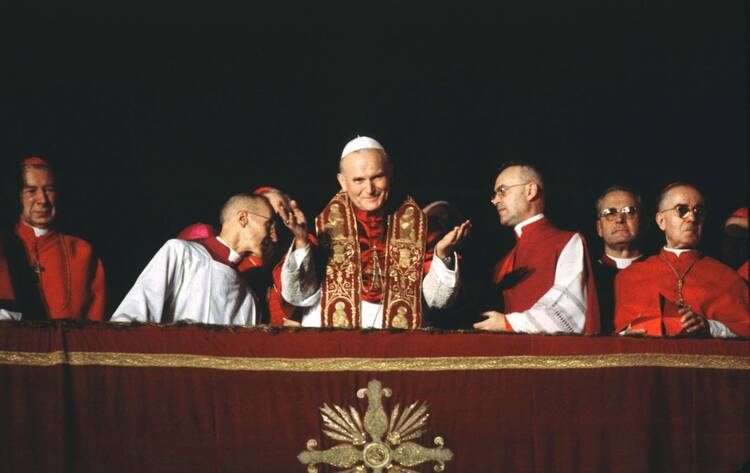 This article originally appeared in the May 23, 1981 edition of America.

Despite the shock, there was an inevitability to the newsflash: Sooner or later, someone was going to shoot Pope John Paul II. The thought has been there, in the back of my head, since those crisp, sunny October days in 1978 when Karol Cardinal Wojtyla first showed the world glimpses of his very different papal style as John Paul II. In his first meeting with over a thousand journalists and hangers-on a few days after his election, he shocked his Vatican entourage by working the crowd as he entered and left the audience hall. I was enjoying the look of exquisite agony on the face of a Vatican monsignor accompanying the Pope, when a woman journalist standing next to me whispered the unthinkable: “Will he be the first pope to be assassinated?”

The comment was triggered by the remarkable personal accessibility of the new pope. But it only made sense in the context of a violent world where the famous become targets as a price of their prominence. When Walter Murphy’s novel of a few years ago, The Vicar of Christ, reached its climax with a papal assassination, it seemed to be, if anything, an obvious rather than a far-fetched fictional device.

Despite the shock, there was an inevitability to the newsflash: Sooner or later, someone was going to shoot Pope John Paul II.

Assassination events, particularly for Americans, have developed their own ritual, from the first jolting newsbreak through the early confused and fragmentary reports to the extended but frustrating search for a deeper meaning to what seem to be pointless acts of violence. As I write this, early on the afternoon of May 13, the good news has come that none of the Pope’s vital organs were injured. The first bits of news have coalesced into a coherent shape; there is a fairly good idea of the sequence of action in St. Peter’s Square a few hours earlier, and now the questions concern the men arrested, their identification and the possible significance, religious or political, of their motivation.

The questions about motivation are always asked in a rational way, even though they inquire into madness. The future consequences of the deed are carefully assessed as though one could predict what the implications of madness would be. Even now the phone is ringing with media types inquiring about the possible impact the shooting will have on the papal style or the Italian referendum on abortion. (Shall they ask about women’s ordination next?)

John Paul II committed sins, too. Just like all the other saints.
Stephen P. White

But madness cannot be explained, and its results can hardly be calculated. We live in a world where there are many angry people bent on destruction—of themselves and others; sometimes they are in the demonic grip of some cause, ready to shed blood, their own and others’, for an abstraction, a myth. Often, though, they cannot give the name of any cause, however illusory it might be, to the dark, explosive impulses within them. Into which of these categories will John Paul’s assailants fit? Does it really make any difference? Is one form of madness somehow more acceptable than another? Does one form of violence offend the human spirit less?

I was in Manila when an attempt was made on the life of Pope Paul VI. There was a surreal quality to the whole episode. The assailant proved to be a would-be artist, a foreigner living on the fringes of the local art colony. His paintings soared in value after the short scuffle at the airport when he lunged at the Pope with a knife. Apologists for President Marcos claimed that he had disarmed the assassin with a karate chop, a version not confirmed by film or independent witnesses. In a very short time, the incident had become just another colorful anecdote. What happened in St. Peter’s Square today is a story of a much darker hue.

[Read this next: The bond between Our Lady of Fatima and the past three popes]

Joseph A. O’Hare, S.J., served as America’s editor in chief from 1975-84, before being named president of Fordham University, and remained there until 2003. Also a civic leader, Father O’Hare returned to America in 2003 to serve as an associate editor. He retired in 2009 and was involved in pastoral work until his death in 2020.