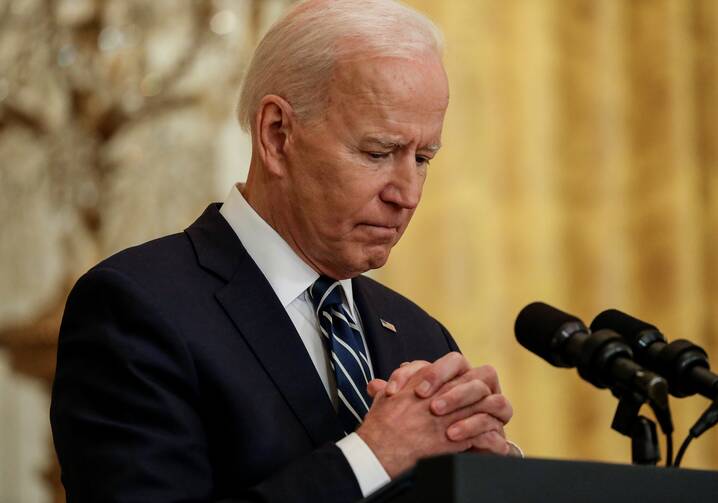 On April 28, the Associated Press reported that the U.S. Conference of Catholic Bishops plans to vote on a document during their annual meeting in June that would make clear that President Biden and other Catholic public officials must choose between receiving Communion and publicly advocating for abortion access.

“Because President Biden is Catholic, it presents a unique problem for us,” said Archbishop Joseph Naumann of Kansas City, Kan., who chairs the U.S.C.C.B.’s Committee on Pro-Life Activities. “It can create confusion.... How can he say he’s a devout Catholic and he’s doing these things that are contrary to the church’s teaching?”

Below is a collection of reader responses to the report. We encourage you to join the conversation in the comments sections at the bottom of this page or on the original article.

These comments have been edited for length, style and clarity.

If Biden publicly supported and signed legislation that directly supported slavery, I hope we wouldn’t still be having this conversation, that there would be unanimous outcry supporting withholding Communion. Yet if we’re “only” talking about abortion, somehow “it’s the bishops’ fault” for weaponizing the Eucharist.

Biden (presumably) knows what the church has believed and taught for millennia, yet insists on presenting himself anyway. This is Biden’s provocation.

Honestly, Biden is the one to weaponize it. He (presumably) knows what the church has believed and taught for millennia, yet insists on presenting himself anyway. This is Biden’s provocation. If he doesn’t want to abide by the Catholic faith and morals, there are plenty of Protestant denominations that will readily take him in and allow him to believe and practice whatever he so chooses.

Come to think of it, why single out Biden? Is he the only Catholic in the United States? Shouldn’t they be preaching that all Catholics guilty of the mortal sin not receive Communion? Where were these guys when innocent children were crying out for help? Why aren’t they using their powerful voice to collectively demand social justice? Isn’t killing someone because of their different background a mortal sin?

I happened upon this article while on my TV President Biden was delivering his State of the Union address.

The bishops’ attitude mirrors the Derek Chauvin attitude: submit or we will press our collective knees to your throat until you do.

Nothing meaningful will be taught except that orthodoxy will be perceived as just a power play over believers. It is what killed Christ, and the pews will only empty further.

Might the perception of the bishops that Biden is “teaching” fellow Catholics bespeak a very poor self-image they have for their own teaching skills?

President Biden has sworn before God to support and defend the Constitution of the United States against all enemies, foreign and domestic. This includes all constitutionally protected rights, including the rights of abortion, contraception and same sex-marriage, which he is doing.

Good luck with that.

What if President Biden publicly and voluntarily refrains from receiving Communion while continuing to attend Mass? There is no shame in this. Some people would blame him for capitulating; some would crow over his admission of grave sin. But aren’t they already blaming and crowing? At least he would prevent the Blessed Sacrament from being used as a political cudgel. Given his evident reverence for the sacraments, I wouldn’t be at all surprised to see him make this humble choice.

I assume they consider his attitude/behavior to be sinful. So, if the Eucharist is not for the sinner, then who is it for? Only the righteous? Which bishop considers himself worthy of that designation? I sort of recall Jesus’ declaration that a physician comes for the ill, or words to that effect. It’s comforting to know that we’re led by such a “healthy” lot.

if the Eucharist is not for the sinner, then who is it for? Only the righteous? Which bishop considers himself worthy of that designation?

The article did not mention that Biden is now against the Hyde Amendment, which protects American taxpayers from having to pay for induced abortions. He flip-flopped on this during the Democratic presidential primary campaign the very day after the “National Organization for Women” criticized him for his previous support of the Hyde Amendment.

Yes, he should be denied Communion. It doesn’t seem to be a “matter of conscience” but rather a matter of cheap political ambition.

The total responsibility in the issue of abortion lies with the woman who is pregnant. Not the president, not the church, not all those male legislators who think they own the bodies of us women. As a woman, I can tell you that very few want to abort the pregnancy. As a professional social worker, I can tell you that most would not understand the situations where abortion would be required. The woman is the best one to determine whether or not this child can be raised in a healthy, nurturing way.

President Biden recognizes that women can make this decision, and those women who are Catholic will weigh the Catholic Church’s ruling that it is a grave sin. President Biden is president of all people, not just Catholics. He must make decisions that benefit everyone. Please, Catholic Church, get your nose out of women’s issues.

[Read this next: Catholics grade the second Catholic president 100 days in]