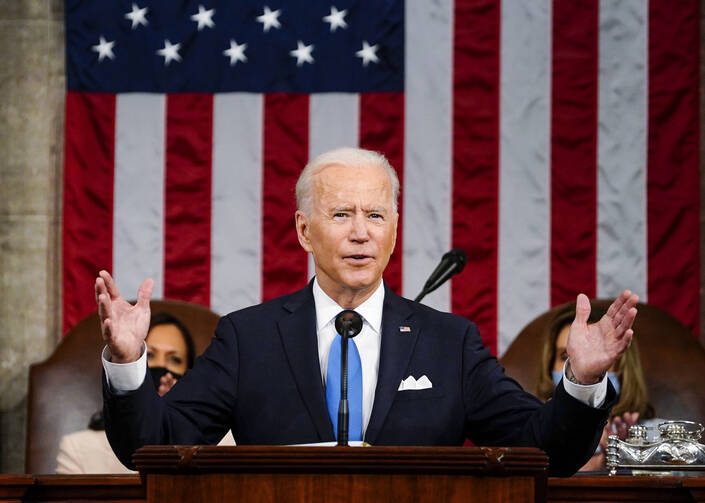 As President Biden marks 100 days in office on Thursday, leaders of Catholic organizations working in areas the administration has pegged as priorities say that they are grateful for signs of progress but caution that more is needed to fulfill campaign promises. At the same time, some bishops continue to be highly critical of Mr. Biden, with some suggesting that the nation’s second Catholic president should not be allowed to receive Communion.

“The first 100 days of the president’s term have given me a sense of optimism,” the head of Catholic Charities USA, Donna Markham, O.P., said in an email to America. Sister Markham said she is hopeful that the president’s economic recovery plan, which he signed into law on March 11, could “provide much-needed housing assistance and financial support for people who are struggling terrifically right now.”

Mary Haddad, R.S.M., who leads the Catholic Health Association, also praised the American Rescue Plan, which she called “particularly noteworthy given its focus on measures to make health coverage more accessible and affordable for more Americans.”

“The first 100 days of the president’s term have given me a sense of optimism,” the head of Catholic Charities USA, Donna Markham, O.P., said.

Sister Haddad also praised the administration’s efforts “to speed up the vaccination program and reach out to underserved and vaccine-hesitant communities” as well as Mr. Biden’s “willingness to re-engage our nation on such important issues as global health, including re-entry into the World Health Organization.”

In March, Mr. Biden signed the American Rescue Plan, a $1.9 trillion economic stimulus seeking to assist in the recovery from the economic toll caused by the Covid-19 pandemic. Shortly after, Mr. Biden unveiled a $2.3 trillion infrastructure and jobs proposal, which includes money to expand access to health care, job training and environmental improvements. And in a speech to Congress on April 28, Mr. Biden highlighted his American Families Plan, a $1.8 trillion proposal that would enact paid family leave, universal preschool and free community college.

[Related: Biden wants to go big on infrastructure. Catholic leaders are hopeful it will help the poor]

“The administration is pivoting away from a 40-year frame of ‘small government is better government’ to one that proposes expansive investment in community aimed at ensuring no one lives in poverty,” Ms. Novak said in an email. Ms. Novak also said she is impressed by Mr. Biden’s efforts to lower the political temperature. “What he is working to achieve is not a superficial peace but a place where we can reach a shared understanding of our communal reality without fanning the flames of division.”

Some of Mr. Biden’s early executive actions have sought to reverse Trump-era environmental rules, and his spending proposals include provisions aimed at supporting green technology.

Patricia McDermott, R.S.M., the president of the Institute of the Sisters of Mercy of the Americas, praised many of Mr. Biden’s early actions and said she hopes his infrastructure plans will help in the fight against climate change.

“Moving forward, over the next 100 days and beyond, the Sisters of Mercy support the goals articulated in the president’s infrastructure plan that will provide significant investments in renewable energy and other green initiatives, steps that will begin to address, and hopefully mitigate, the building climate crisis,” Sister McDermott said.

“The administration is pivoting away from a 40-year frame of ‘small government is better government’ to one that proposes expansive investment in community aimed at ensuring no one lives in poverty.”

Many Catholic leaders interviewed about Mr. Biden’s job performance just over three months into his presidency said that while they are inspired by his early actions, they hope his administration fulfills campaign promises related to capital punishment, immigration and refugee resettlement.

Mr. Biden is the first modern president to oppose the death penalty, and while he has reportedly begun talks about how to end the practice by the federal government, the head of a Catholic organization against capital punishment said she is waiting for the president to speak out publicly against the practice.

Krisanne Vaillancourt Murphy, the executive director of the Catholic Mobilizing Network, said Mr. Biden’s focus on racial justice should “prioritize dismantling the archaic, broken systems that prop up racism in our country. Without question, the abolition of capital punishment fits into these aims.”

“It will take political will and moral courage to set in motion the abolition of the federal death penalty,” Ms. Vaillancourt Murphy said. “But without question, there are countless Catholics ready to support President Biden if and when he should choose to embark down that path.”

“It will take political will and moral courage to set in motion the abolition of the federal death penalty,” Ms. Vaillancourt Murphy said.

On immigration, Dylan Corbett, the executive director of the Hope Border Institute, said that he is encouraged by Mr. Biden’s early actions.

“In the first days of the administration, the president took some really strong action on immigration,” Mr. Corbett said. He said the Biden White House has changed the tone coming from Washington about immigration—no small feat, he added, following years of “hate speech that caused real human damage.” The administration has reached out to local agencies to discuss the situation at the border, he said, and officials seem committed to addressing the root causes of mass migration, including climate change.

But, Mr. Corbett said, “it’s still wait and see” when it comes to how the administration will work with Congress to enact comprehensive immigration reform, and he worries that Mr. Biden could be “vulnerable to politics” and resort to deterrence efforts to stem migration.

“It’s going to take statesmanship to get us out of this cycle,” Mr. Corbett said. “But I believe [Mr. Biden] can deliver the strong political leadership we need to address the situation at the border.”

Joan Rosenhauer, the executive director of Jesuit Refugee Service, called the start of Mr. Biden’s presidency “a mixed bag when it comes to refugee and immigration policies.” She praised the president’s decision to reverse the travel ban that had restricted the resettling of refugees from several predominantly Muslim countries and praised the resettlement of about 4,000 asylum seekers who have found “relief and joy that their dream of finding safety in the U.S. is coming true.”

Mr. Corbett said “it’s still wait and see” when it comes to how the administration will work with Congress to enact comprehensive immigration reform.

But the Biden administration has delayed raising the cap on the number of refugees the United States is committed to resettling.

“Thousands of people seeking protection are still being turned away and are unable to file asylum claims,” Ms. Rosenhauer added. “Looking forward, we are urging the administration to follow through on its promise to raise the refugee admissions goal and to fully reinstate access to asylum in the United States so that people fleeing violence and persecution can find refuge here.”

The U.S. Conference of Catholic Bishops declined to provide a statement about Mr. Biden’s first 100 days, but an examination of the dozens of statements they have released since his inauguration, plus comments from some bishops about denying the president Communion, show a complicated relationship.

On issues related to immigration and the environment, they seem supportive, as in a statement on April 26 that praised the administration’s “commitment to climate stewardship and environmental justice.” Other statements have been more critical, including one from April 19 that condemned the administration’s decision to end a prohibition on using fetal stem cells in scientific research.

“Working with the administration presents both challenges and great opportunities to advance meaningful policies that will help some of the most vulnerable people in our country.”

Perhaps most illuminating of the complex dynamic between the administration and the bishops is a statement signed by Archbishop José Gomez, the president of the U.S.C.C.B., and six committee chairmen in March following the passage in the U.S. House of the American Rescue Plan.

The statement praised the “many positive provisions” in the plan, such as enhanced unemployment benefits, money for housing assistance and increased funding for vaccine distribution. But the bishops wrote that it was “unconscionable” that the legislation did not include provisions that would have prevented funds from being used for abortion.

And on Wednesday, just ahead of Mr. Biden’s address to a joint session of Congress, The Associated Press reported that U.S. bishops plan to debate in June whether to issue a document that would make clear that Mr. Biden and other Catholic public officials who advocate for abortion access should not present themselves for Communion.

“Because President Biden is Catholic, it presents a unique problem for us,” Archbishop Joseph Naumann of Kansas City, Kan., who chairs the U.S.C.C.B.’s Committee on Pro-Life Activities, told The Associated Press. “It can create confusion.... How can he say he’s a devout Catholic and he’s doing these things that are contrary to the church’s teaching?”

Still, some Catholic leaders say that they remain optimistic about working with the administration in the coming years.

“At Catholic Charities we approach our mission not as partisan political actors but rather as people committed to the mission of Jesus,” Sister Markham said. “Working with the administration presents both challenges and great opportunities to advance meaningful policies that will help some of the most vulnerable people in our country.”