Vatican statistical yearbook: The number of Catholics is growing on every continent—except Europe. 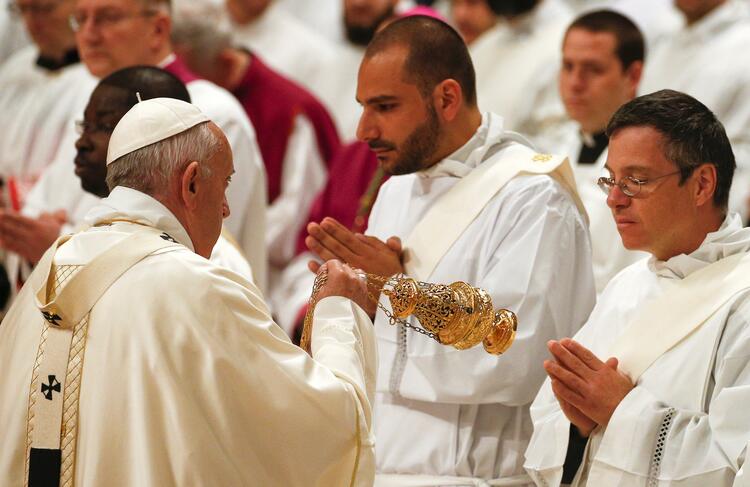 Pope Francis blesses candidates for priestly ordination with incense during a Mass in St. Peter's Basilica at the Vatican May 12, 2019. The number of Catholics and of permanent deacons in the world has risen, while the number of religious men and women decreased, according to Vatican statistics. (CNS photo/Yara Nardi, Reuters)

VATICAN CITY (CNS) -- The number of Catholics and permanent deacons in the world has shown steady growth, while the number of religious men and women continued to decrease, according to Vatican statistics.

At the end of 2019, the worldwide Catholic population exceeded 1.34 billion, which continued to be about 17.7% of the world's population, said an article published March 26 in the Vatican newspaper, L'Osservatore Romano.

The article contained a handful of the statistics in the Statistical Yearbook of the Church, which reported worldwide church figures as of Dec. 31, 2019. It also announced the publication of the 2021 "Annuario Pontificio," a volume containing information about every Vatican office, as well as every diocese and religious order in the world.

According to the statistical yearbook, the number of Catholics increased in every continent except Europe.

The largest increases were seen in Africa and Asia, with a growth of 3.45% and 2.91%, respectively, followed by Europe with a 1.5% increase and the Americas with about 0.5% more.