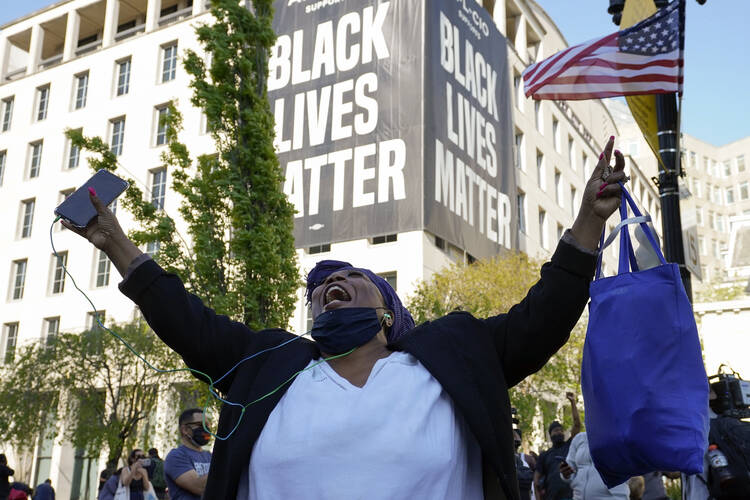 Lisa Robinson of Washington, reacts on Tuesday, April 20, 2021, in Washington, as the guilty verdict in Minneapolis, in the murder trial against former Minneapolis police officer Derek Chauvin was announced. (AP Photo/Alex Brandon)

George Floyd’s killing last May had prompted months of protests against police brutality and racially charged violence across the United States and the world.

“The verdict in the trial of Derek Chauvin is a sobering moment for our community,” said Archbishop Bernard A. Hebda of St. Paul and Minnesota in a statement released soon after the verdict was announced.

The decision, he said, “punctuates the grief that has gripped the Twin Cities in these last months and underscores the soul-searching that has taken place in homes, parishes, and workplaces across the country as we together confront the chasm that exists between the brokenness of our world and the harmony and fraternity that our Creator intends for all his children.”

U.S. bishops: “The death of George Floyd highlighted and amplified the deep need to see the sacredness in all people, but especially those who have been historically oppressed.”

The jury’s guilty verdicts on second-degree unintentional murder, third-degree murder and second-degree manslaughter counts came after just 10 hours of deliberation over two days that had followed a trial that lasted three weeks.

“The death of George Floyd highlighted and amplified the deep need to see the sacredness in all people, but especially those who have been historically oppressed” read a joint statement of two committees of the United States Conference of Catholic Bishops.

“As we have seen so plainly this past year, social injustices still exist in our country, and the nation remains deeply divided on how to right those wrongs.”

Quoting from a statement of the Minnesota Catholic Conference, the bishops reiterated that “the Catholic Church is committed to changing hearts and minds and to moving the conversation about race in this country beyond accusations and recriminations toward practical, nonviolent solutions to the everyday problems that are encountered in these communities,” capping their statement with a call to action on the part of all the Catholic faithful.

“Let us pray that through the revelation of so much pain and sadness, that God strengthens us to cleanse our land of the evil of racism which also manifests in ways that are hardly ever spoken, ways that never reach the headlines. Let us then join in the hard work of peacefully rebuilding what hatred and frustration has torn down.”

Donna Markham, O.P., the president and C.E.O., of Catholic Charities USA, issued a statement affirming the agency’s commitment to address issues of inequality and discrimination “by leading conversations on race, speaking up for the under-served, and providing resources to remain educated on this systemic issue.”

“We pray that Mr. Floyd’s family finds peace in today’s verdict that found the officer guilty on all counts,” said Sister Markham.

“While there may be a brief sense of relief that justice has been served,” she added, “we must acknowledge that, as a country, we still have a lot of work to do to eradicate the pervasive racism and continued disregard for human life that continues to play out in communities across the country.”

“The agonizing images of his confrontation with those sworn to protect and serve, and the final moments of life, will forever challenge us and must always compel us to create a more compassionate and just society, where all enjoy equal rights and protections under the law,” said Bishop Fisher.

Donna Markham, O.P.: “We must acknowledge that, as a country, we still have a lot of work to do to eradicate the pervasive racism and continued disregard for human life that continues to play out in communities across the country.”

“Today’s verdict will usher in a wide variety of reactions,” said Archbishop Nelson J. Pérez of Philadelphia. “I entreat all people to treat each other with respect, charity, and good will as they process the news in their own way.

“Regardless of individual points of view,” he said. “it is imperative to remember that criminal justice is a matter for the courts alone. Ensuring social justice, on the other hand, is a common responsibility that we all share.

“While the trial has concluded,” Archbishop Pérez said, “the struggle to eradicate hatred is ongoing. Our God challenges us to love our neighbors with open hearts and to see Christ’s presence in them.”

Bishop John Stowe, O.F.M. Conv., of the Diocese of Lexington said that today's verdict “marks the beginning of an era of accountability for the violation of human dignity and the taking of human life by those in power.” The statement by the bishop, who is also the bishop-president of Pax Christi USA, characterized the jurors’ decision to convict Mr. Chauvin as “a long overdue result that finally brings justice for a Black victim of a brutal killing by police.”

“This verdict respects both the rule of law and what the whole world watched on video,” said Bishop Stowe. “More importantly it affirms what has been shouted on our streets for nearly a year, George Floyd's life matters, Black lives matter.”