Catholic Church leaders in Africa: U.S. return to Paris climate accord could make up for ‘lost momentum’ 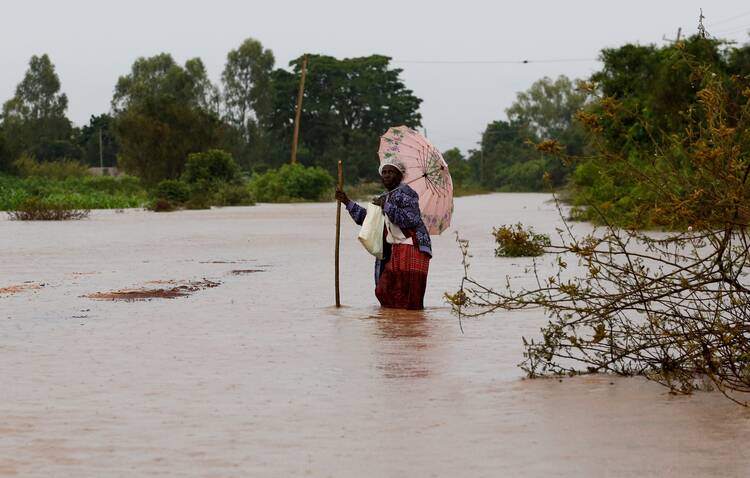 A woman wades through floodwaters in Busia, Kenya, May 3, 2020. Across East Africa, flooding has resulted from months of excessive rainfall, which has also triggered landslides and mudslides. It has left thousands homeless and destroyed farmland. (CNS photo/Thomas Mukoya, Reuters)

One of the first actions taken by President Joe Biden after his inauguration in January was to issue an executive order to rejoin the Paris climate agreement. That neatly reversed the position of his predecessor, Donald Trump, who had pulled the United States out of the accord in 2017.

The turnabout was cheered by environmental activists in Africa, a continent that contributes a comparatively tiny amount to the problem of global warming but stands to suffer mightily because of climate change related to it. The Pan African Climate Justice Alliance, established in 2008, is the largest civil society consortium promoting inclusive strategies to address climate and environmental challenges in Africa.

“Re-joining the Paris Agreement is an important first step in moving the global community in the direction it ought to be heading,” the nonprofit said, responding to Mr. Biden’s action. P.A.C.J.A. members said the decision to rejoin the accord should ramp up climate action in the United States and set an example for other big carbon emitters to follow.

President Biden's turnabout on the Paris climate accords was cheered by activists in Africa, a continent that contributes a tiny amount to global warming but stands to suffer mightily because of climate change.

The group also warned of an adaptation finance gap—that is, money committed by wealthy donor states to aid lower-income nations in adapting to climate change or to mitigate greenhouse gas production is similarly not reaching low-income states in Africa as fast as needed. “Following a lull in global climate action due to Covid-19 and America’s initial withdrawal from the Paris Agreement, 2021 will be crucial in recharging lost momentum,” P.A.C.J.A. said.

The executive director of P.A.C.J.A., Mithika Mwenda, said the recommitment of the United States to the agreement should rekindle dwindling global enthusiasm for addressing the climate crisis. Africans are already dying “from the adverse impacts of climate change, despite playing an insignificant role in creating the current crisis,” he said. “America’s leadership in addressing climate change is not only sensible but fair to disproportionately affected communities in Africa and other developing countries.”

Joe Nkamuke, a researcher for the Catholic Caritas Foundation of Nigeria, believes the principal challenge associated with the U.S. re-entry to the Paris agreement will be re-establishing itself as a global climate leader, or “policeman.”

He said the White House will have to quickly move bipartisan legislation aimed at combating climate change through Congress, “especially those that will allow funds to flow [to African states]. This is not very easy in a country that is torn between two ideologies and fractured along many fault lines in the recent past.”

Ernest Obodo, an auxiliary bishop of the Diocese of Enugu in Nigeria, described the U.S. return to the accord as a step in the right direction in “combating a common issue we face.” Bishop Obodo said the church in Nigeria has been a strong advocate of preserving the environment and educating Catholic communities on the importance of mitigating climate change.

“Following a lull in global climate action due to Covid-19 and America’s initial withdrawal from the Paris Agreement, 2021 will be crucial in recharging lost momentum.”

The continuing reliance on fossil fuels by the West has profound ramifications for Nigeria and not just because of climate change. Bishop Obodo pointed out that while oil extracted in Africa is intended for overseas markets, “oil spillage and gas flaring in the Niger Delta region creates great problems for the people living in that region.”

He said, “Waterways are polluted and farmlands destroyed, leading to environmental disasters and loss of livelihoods.”

The Niger Delta is a mangrove ecoregion. Sadly, hundreds of square miles of the delta have been polluted by oil spills. A United Nation Environment Program report commissioned by the Nigerian government found that decades of oil industry pollution was more extensive than previously thought. In 2017, the government launched a $1 billion project with oil companies active in the region to clean up the polluted sites.

Africa accounts for the smallest share of global greenhouse emissions among major regions, at 3.8 percent. China is the world leader, producing 23 percent of emissions; the United States produces 19 percent and the European Union 13 percent. But climate change will have potentially devastating effects on the continent, with far-reaching impacts on vulnerable communities who will—or who already—face floods, drought, food insecurity, loss of livelihoods and depletion of water sources. The African Union’s Agenda 2063, a master plan concluded in 2013 “for transforming Africa into the global powerhouse of the future” recognizes climate change as a major challenge to the continent’s economic and social development.

The State of the Climate in Africa 2019, published by the World Meteorological Organization, warns that increasing temperatures, rising sea levels, changing precipitation patterns and the increasing intensity of extreme weather are threatening human health and safety, food and water security, and socioeconomic development on the continent. According to the report, Southern Africa suffered extensive drought in 2019 related to climate change. The Greater Horn of Africa region shifted from very dry conditions in 2018 and most of 2019 to floods and landslides associated with heavy rainfall in late 2019. In 2019, flooding also affected the Sahel and surrounding areas.

Africa accounts for the smallest share of global greenhouse emissions among major regions at 3.8 percent. China is the world leader, producing 23 percent of emissions and the United States produces 19 percent.

African countries want more long-term financial commitments from the West in tackling climate change challenges, asking that Western states fulfill a pledge to mobilize $100 billion each year to support vulnerable countries. The Africa Development Bank estimates that between $20 billion and $30 billion annually will be needed to fund climate change adaptation in Africa over the next two decades.

Article 9 of the Paris Agreement requires developed countries to provide financial resources to assist developing countries with respect to mitigation and adaptation “to build clean, climate-resilient futures.” Ugochukwu Ugwoke, iSch., told America that developed nations have an obligation to help combat the crisis outside their borders.

“Caring for the environment is a challenge for all of humanity because it is a matter of universal concern,” Father Ugwoke said. “That is why everyone is required to preserve God’s gift to us.”

While the United States stepped away from Paris, nations in Africa have stepped up their efforts to implement the agreement and address climate change issues on the continent.

In 2016, Ethiopia developed a Climate Resilient Green Economy Strategy and a climate finance fund, planning to reduce greenhouse gas emissions and address Ethiopia’s vulnerability to climate change while safeguarding economic growth. The National Climate Change Policy Response and Strategy in Nigeria aims to involve all sectors of society, including the poor and other vulnerable groups, within the overall context of advancing sustainable socioeconomic development.

Bishop Obodo said that local practices in Africa also need to be scrutinized: “There is [little] effort to curb the effect of the many old and dilapidated machines that work in the few industries that we have.”

During a climate change summit in 2019, Nigeria’s President Muhammadu Buhari presented a Climate Change Action Plan that outlines a transformation to a low-carbon economy and 50 percent lower emissions. Nigeria is working toward improving energy efficiency and creating renewable energy sources by 2030, Mr. Buhari said, with a goal of removing 179 million tons of carbon emissions annually.

The president also announced a massive reforestation effort with a goal of planting 25 million trees in Nigeria, part of an effort to restore its capacity to act as a carbon sink. Over decades of unrestrained development, Nigeria has lost 96 percent of its forest cover, according to the Nigeria Conservation Foundation.

Local community efforts by nonprofits and environmental activists in Nigeria should also help reduce greenhouse gases. Communitrees, a community-based tree planting and climate advocacy project, was started by Susty Vibes—a social enterprise supported by the British High Commission in Nigeria that creates opportunities for young people to participate in sustainable practices. Communitrees is part of a larger #NigeriaForNature initiative aimed at encouraging community-based climate action. It includes an effort next month to plant 5,000 trees in Lagos and Abuja.

Beyond applying pressure on Western states to do more, Bishop Obodo said that local practices in Africa also need to be scrutinized. “Even though Nigeria is not heavily industrialized,” he explained, “there is [little] effort to curb the effect of the many old and dilapidated machines that work in the few industries that we have.”

Nigeria’s importation of used cars from America and Europe is another local contributor, Bishop Obodo said. “These are sources of environmental pollution that bring about a lot of health challenges to the people,” he added. “Terminal illnesses like cancer and lung-related illnesses are becoming so rampant in our country, thanks to these environmental pollution issues.”