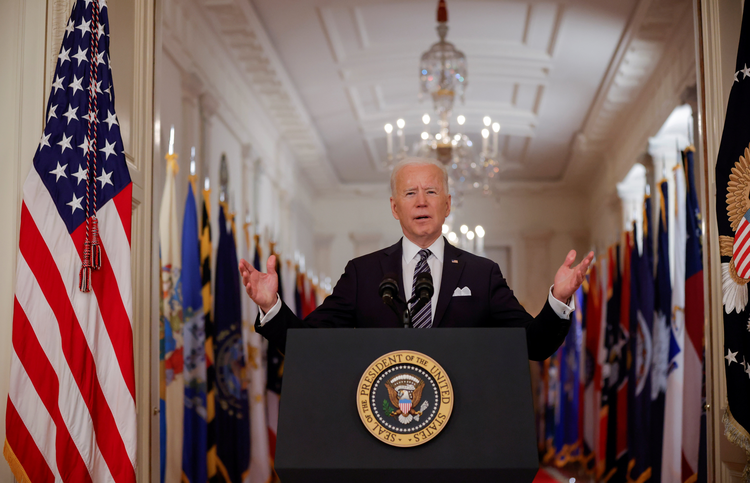 President Joe Biden delivers his first prime-time address from the White House in Washington on March 11, 2021, marking a year since the World Health Organization declared the coronavirus a pandemic and the first anniversary of widespread shutdowns to stop the spread of the virus. (CNS photo/Tom Brenner, Reuters)

Through the 2020 election campaign, Mr. Biden’s challenge was to forge an electoral majority out of an electorate that does not like to be so molded. So what is Mr. Biden’s task now? Well, to forge a bigger electoral coalition, of course. Maybe even to build a lasting one that will survive his term in office.

At his inaugural press conference, Mr. Biden sought to do that. He said directly that he has Republican voters on his side, if not Republican elected officials. He expressed this specifically in regard to what he called the “sick” and “un-American” efforts to limit voting rights.

Characterizing Covid-19, for example, as a burning issue that affects all Americans and needs to be addressed now, he positioned himself as the president who serves all Americans. His next campaign is about infrastructure spending, which former President Donald J.Trump himself thought was a great idea.

Mr. Biden wants to build support among U.S. citizens so that the G.O.P. is forced to work with him. The message, as Abby Phillip of CNN noted after the press conference, was “I have the support of the American people.”

This is a surprisingly populist argument. If it works, then he and other Democrats can win more elections and continue to satisfy many constituencies, including the progressives who were skeptical of him during the primaries. If it does not work, in some quarters it would confirm that ideological extremism and divide-and-conquer strategies are still the way to go in American politics.

Mr. Biden wants to build support among U.S. citizens so that the G.O.P. is forced to work with him.

Mr. Biden’s rhetoric has largely been oriented around the middle class. He still speaks as though most Americans can find good-paying union jobs. At the end of the day, he is still “Scranton Joe.”

But this all suits his new populist gambit. After all, part of the rhetorical appeal of U.S.-style populism is that we all want to be part of the “middle,” even Ivy League-educated lawyers like Josh Hawley.

Mr. Biden also appears to be well-positioned to address one of the deficiencies of populism.

One of the chief problems of populism is scapegoating: there is always an enemy of “the people” who must be destroyed. At his best, Mr. Trump criticized elites, liberal and conservative, for the very real failures of governance over recent decades. At his worst, however, Mr. Trump targeted all kinds of people, needlessly antagonizing voters and dehumanizing the weakest among us.

Mr. Biden’s rhetoric has largely been oriented around the middle class. He still speaks as though most Americans can find good-paying union jobs.

Mr. Biden’s strategy seems to be different. He speaks for “the people,” liberal and conservative. While he certainly targeted G.O.P. elected officials in his press conference remarks, including Mr. Trump and Mr. McConnell, he signalled that he would be willing to work with them if they were willing to concede his terms.

Does all of this amount to a kinder, gentler populism?

Perhaps Mr. Biden’s populism will not last, and in any event populism is doubtless inadequate to what he is doing. But a populism that truly sought to unite the people would be a return to the days when American politicians campaigned and governed as though they could unite diverse coalitions to win a solid majority of the U.S. electorate. This strategy does not reinforce the bitter, rivalrous politics that always end up devouring its own masters.

Progressive Democrats must wonder if this is the long game they need to secure important policy victories around climate change, inequality, race and gun control. Mr. Biden has never been their standard-bearer, but could he turn out to be the champion they need?

Mr. Biden’s strategy seems to be different. He speaks for “the people,” liberal and conservative.

Republicans have to weigh their options for compromise with the Biden administration. After four years of relative inaction on the policy front, could the Biden years be a fruitful time for the wonkish conservatism that wants to show that the G.O.P. can do more than react against Democratic policy? Mitt Romney certainly thinks so.

Catholics who supported Mr. Biden in the 2020 U.S. election might see in this populism a glimmer of hope that he is who they believed in: someone with a firm vision of the common good and a calm conviction that a thoughtful, well-timed approach is better than a rushed frenzy.

My greatest fear concerns immigration. People are suffering now from the Biden administration’s inability to hit the ground running on this issue. Mr. Biden’s ability to play short and long games here will be of tremendous consequence to this issue—more than most.

Catholics who supported Mr. Biden in the 2020 U.S. election might see in this populism a glimmer of hope that he is who they believed in.

Working to win voters across the spectrum would be a welcome change in U.S. politics. Can Mr. Biden pull it off? Well, I’ll let Mr. Biden explain that:

I mean, look, this is—the way I view things—I’ve become a great respecter of fate in my life. I set a goal that’s in front of me to get things done for the people I care most about, which are hardworking, decent American people who are getting—really having it stuck to them.
I want to change the paradigm.

If anyone wishes to criticize Mr. Biden, I hope they do so not by rejecting this vision but by doing it better than he can.