An unholy trinity led to the Capitol Riots: Fake news, fanaticism and a fetish for guns. 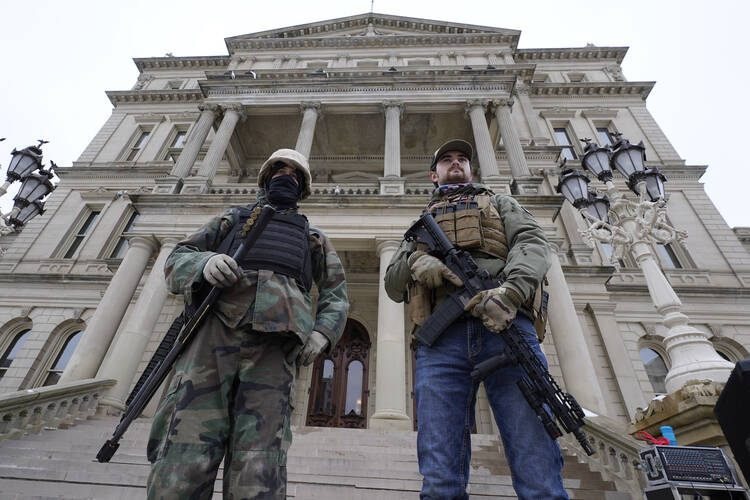 Armed men stand on the steps at the State Capitol after a rally in support of President Donald Trump in Lansing, Mich., on Jan. 6, 2021. (AP Photo/Paul Sancya, File)

We are doing it to ourselves, of course: crafting idols out of our politicians; stacking guns into shrines in our homes or wearing them across our chests like amulets; and poisoning our minds with litanies of wild conspiracies. We embrace extremism that leads to hockey sticks slashing across the heads of police officers and fists crashing through Capitol Hill windows.

An unholy trinity of fake news, fanaticism and gun fetishism converged on Jan. 6 in a uniquely American threat to American democracy. Police were outnumbered and overwhelmed that day by a violent mob at the U.S. Capitol itself. Law enforcement officials were hesitant to use the lethal force entrusted to them to protect the nation’s legislators, at least partly because they feared provoking a hail of return fire from the crowd.

This January, 2.3 million firearms were sold in the United States, 80 percent above the previous year’s tally.

This violence did not come out of the blue. As streets that had been emptied by Covid filled with protest marches, millions of anxious Americans bought a record number of firearms in 2020. The F.B.I. reports that it processed 40 million firearm background checks last year, beating the previous high by more than 10 million.

This January, according to an analysis by The Washington Post, 2.3 million firearms were sold in the United States, 80 percent above the previous year’s tally. In Michigan, where armed protesters against Covid-related restrictions stormed the state capitol last April, in a forerunner to the Jan. 6 insurrection in Washington, gun sales surged more than 300 percent. In light of this trend, reinstating the 1994 assault weapons ban that had successfully reduced the number of mass shooting events would be a welcome legislative goal for the Biden administration.

As for fanaticism, there have been plenty of warnings about extremist views gaining traction in the United States, notably within military ranks and among veterans. A classified threat assessment from the Department of Homeland Security in 2009 warned that right-wing extremists hoped to radicalize veterans described as “disgruntled, disillusioned, or suffering from the psychological effects of war.” An analysis from NPR in January found that one in five of the insurrectionists that had been arrested so far came from a military background—a rate almost three times the military’s representation (about 7 percent) among the general public.

There have been plenty of warnings about extremist views gaining traction in the United States, notably within military ranks and among veterans.

Leaked to the press, the D.H.S. report provoked an uproar. Then-D.H.S. chief Janet Napolitano was hounded by Republicans and abandoned by Democrats and finally forced into an “apology tour” on Fox News. A D.H.S. special unit established in 2004 under President George Bush to root out extremist threats of all stripes was shut down in the aftermath of the controversy.

Too many events have since proven that the D.H.S. report was prescient. Among respondents to a survey conducted by The Military Times in 2019, more than one-third of all active-duty troops and more than half of minority service members said they had personally witnessed examples of white nationalism or ideologically motivated racism within the ranks. In October 2020, an updated D.H.S. threat assessment correctly predicted that domestic violent extremists (D.V.E.s) would likely seek to exploit election events, including the final election certification. The authors added: “Among DVEs, racially and ethnically motivated violent extremists—specifically white supremacist extremists (WSEs)—will remain the most persistent and lethal threat in the Homeland.”

Defense Secretary Lloyd J. Austin’s “stand down” order to begin an examination of conscience about extremist and racist tendencies within the military is a good first step to address the problem. Above all, domestic extremism must be recognized as a danger at least as serious as the ongoing threat from international terrorism. Noting that violence from white supremacists over the last four years has eclipsed Islamic extremism, Daniel Byman, a senior fellow at the Brookings Institute, urges the Biden administration to “correct the resource imbalance” in addressing these contemporaneous dangers.

Saving the American mind from its paranoid tendencies is a more difficult challenge. One example of the fake news phenomenon: According to a survey conducted by the American Enterprise Institute a couple of weeks after the Jan. 6 attack on the Capitol, 29 percent of Republican adults and 27 percent of white evangelicals are adherents of the QAnon cult, convinced that former President Donald J. Trump is secretly battling a cabal of pedophile Democrats. Religion News Service’s Jack Jenkins notes that, according to the A.E.I. poll, the QAnon conspiracy is also embraced by 18 percent of white Catholics, 15 percent of white mainline Protestants, 12 percent of non-Christians, 11 percent of Hispanic Catholics and 7 percent of Black Protestants.

According to one poll, the QAnon conspiracy is embraced by 18 percent of white Catholics.

Recent developments may make it harder, or at least more costly, for purveyors of fake news to get away with dissembling-for-profit. Defamation suits filed by Dominion and Smartmatic, providers of voting system technologies, have forced individuals and news organizations to acknowledge that the “stop the steal” stories that so provoked Trump loyalists had no factual foundation. And social media publishers like Facebook have begun taking more seriously an implicit responsibility for the “content” generated by their users. Speech may be free, but no government mandate requires it to be carried over Twitter.

These are worthy practical measures as far as they go. Over the long term, media literacy—and the development of critical thinking skills that accompany it—has to become a foundational component of the education curriculum in the United States. But the retooling of the American mind will remain insufficient to the problem if something moldering in the American soul is not addressed, too. Something is broken that cannot quickly be put right.

The value of community has been abraded for decades by the worst yet most assured voices in media. White Americans have been especially susceptible to the tribalism they’ve promoted—denying common needs, commonality and the common good, retreating into bunkers of resentment.

There is no exorcism rite for political cultism, no patron to protect loved ones from political fanaticism.

And after the shocking, humiliating events of Jan. 6, it is hard to feel hopeful about restoring a national psyche so troubled. There is no exorcism rite for political cultism, no patron to protect loved ones from political fanaticism.

The Trumpian fanatics and QAnon fantasists who stormed the Capitol believed a lightning strike would fix all the wrongs they perceived. Similarly, the gun accumulators and conspiracy-mongers long for a cataclysm that will change everything. But those of us trying to restore civility and sanity to the political process, and to restore renewed appreciation for the common good, have to be prepared for a difficult, patient slog that includes discerning, pride-swallowing and entreating. We have to be spiritual preppers, unhurried but undeterred, waiting in prayerful hope.