After coup in Myanmar, Cardinal Bo calls for calm, release of prisoners and urges West to avoid sanctions 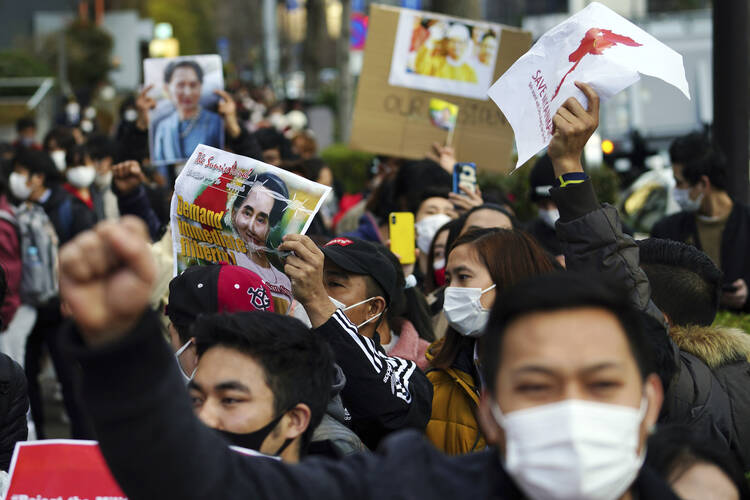 Burmese living in Japan and supporters hold pictures of Myanmar leader Aung San Suu Kyi during a protest in front of the Foreign Ministry in in Tokyo Wednesday, Feb. 3, 2021. Myanmar's new leader said the military government installed after Monday's coup plans an investigation into alleged fraud in last year's elections and will also prioritize the COVID-19 outbreak and the economy, a state newspaper reported Wednesday. (AP Photo/Eugene Hoshiko)

Cardinal Charles Maung Bo, the archbishop of Yangon, has issued a powerful, passionate message to the people of Myanmar, the military that has seized power, the imprisoned civilian leadership and the international community.

He appealed to the 55 million people of this majority-Buddhist country “to remain calm” and not resort to violence in the wake of the military coup. He expressed his closeness to Daw Aung Sang Suu Kyi and the other detained civilian leaders and called on the generals to release them and restore democracy. He pleaded with the international community not to impose sanctions but seek a solution through dialogue.

“I write these lines as a spiritual leader...not as a politician,” he said in his message on Feb. 3. “What has happened is painful. It has shattered our people.”

“I write this with a desire to console them,” he added. “I have watched with sadness the moments of darkness in our history and watched with hope the resilience of our people in their struggle for dignity. We are journeying through [some of the] most challenging times of our history. I write with love toward all, seeking a durable solution, praying for an end forever to the periodic darkness that envelops our dear nation.”

Cardinal Charles Maung Bo appealed to the people of Myanmar “to remain calm” and not resort to violence in the wake of the military coup.

Alleging fraud in the election, the military said the government had ignored its protests, so it seized control early Monday morning, Feb. 1. The military did so just hours before the parliament was to convene to confirm the results of last November’s national election in which Ms. Aung Sang Suu Kyi’s National League for Democracy had won over 80 percent of the vote. The army arrested hundreds of lawmakers, including the country’s state counsellor and de facto civilian leader, Ms. Aung Sang Suu Kyi, and President U Win Myint.

The Associated Press reported on Feb. 3 that the military has lifted restrictions on some lawmakers but not the leaders of the N.L.D. and Ms. Aung Sang Suu Kyi, who remained detained, along with many pro-democracy activists.

The military coup shocked the people of Myanmar, the majority of whom live in poverty. They had already suffered under a harsh military dictatorship for more than 50 years after the country gained independence from Britain in 1948, and now they saw once again tanks and soldiers on the streets. They expressed the first signs of resistance on Feb. 2, according to The Associated Press. In Yangon, Myanmar’s largest city, many “honked car horns, and banged pots and pans.” Others beat drums, which in the local culture signifies “kicking out the devils.”

Cardinal Bo understands people are angry and urged both sides to avoid violence. He told the people that he shared their feelings “as you grapple with the unexpected, shocking events that are unfolding in our country.”

He then pleaded with them: “I appeal to each one of you: Stay calm, never fall victim to violence. We have shed enough blood. Let not any more blood be shed in this land. Even at this most challenging moment, I believe that peace is the only way; peace is possible. There are always nonviolent ways for expressing our protests.”

Cardinal Bo: “I appeal to each one of you: Stay calm, never fall victim to violence. We have shed enough blood. Even at this most challenging moment, I believe that peace is the only way; peace is possible.”

He attributed the military takeover to “a sad lack of dialogue and communication and disputing of diverse views.” He called on the nation’s community leaders and religious leaders to “pray and animate communities for a peaceful response to these events. Pray for all, pray for everything, avoiding occasions of provocation.”

He also recalled the impact of the Covid-19 pandemic on the country. Myanmar has had over 140,300 confirmed cases and 3,100 deaths, and vaccines had just arrived in the country at the time of the coup. He praised the “courageous” health workers for their life-saving work. Noting that some “resigned in protest” at the coup, Cardinal Bo pleaded with them: “Do not abandon your people in need at this time.”

Next, the cardinal addressed the commander in chief of the Tatmadaw (the Myanmar army), senior general Min Aung Hlaing and all members of the military. He told them that “the world has reacted with shock and agony” at their seizing power and recalled that “when, in 2015, a peaceful transition to the elected government was effected by the army, that won the admiration of the world.” Today, he said, “the world tries to understand what went wrong in the following years. Was there a lack of dialogue between the elected civilian authorities and the Tatmadaw?”

He reminded the military that “seven decades of shedding blood and the use of violence brought no results” and told them frankly, “You all promised peace and genuine democracy.” Indeed, he added, “democracy was the streak of hope for solving the problems of this once rich country,” and “this time millions voted for democracy.”

He told them: “Our people believe in peaceful transfer of power.” Referring to the army’s “allegations of voting irregularities,” he said, “these could have been solved by dialogue, in presence of neutral observers. A great opportunity was lost.”

Moreover, he said, “Many leaders of the world have condemned and will condemn this shocking move,” a reference to the condemnations already made by the United States, the European Union, the United Kingdom and other countries. Only China blocked the United Nations Security Council’s condemnation, with backing from Russia.

Cardinal Bo urged the military to immediately release its detainees. “They are not prisoners of war; they are prisoners of a democratic process. You promise democracy; start with releasing them.”

Referring to the military’s suggestion that it has taken power for only one year, the cardinal said, “Now you promise greater democracy—after investigation and another election.” But, he told them, “[The people of Myanmar] are tired of empty promises. They will never accept any fake protestation…. How will you gain the trust of our people? They will trust only when words are matched by sincere actions.”

He concluded his words to the military by calling for the release from detention of “the elected representatives of our people belonging to N.L.D.” and the “many writers, activists and youth” detained so far. He urged the military to “respect their rights and release them [immediately]. They are not prisoners of war; they are prisoners of a democratic process. You promise democracy; start with releasing them.”

Cardinal Bo next addressed the leaders of the National League for Democracy, whom he called “prisoners” because of their “unending struggle to bring democracy to this nation.” He assured them: “We pray for you and urge all concerned to release you.”

Then addressing the 75-year-old Ms. Aung San Suu Kyi, who had already suffered detention for over 15 years and with whom he enjoys a close relationship, he said, “You have lived for our people, sacrificed your life for our people. You will always be the voice of our people.”

He added, “These are painful days. You have known darkness; you have known light in this nation.” He recalled that she is “not only the favorite daughter of the father of the nation, General Aung San” but also of the entire nation.

He assured her: “Truth will prevail. God is the ultimate arbiter of truth. But God waits.” He offered his “personal sympathies” for her plight and promised to “pray that you may once again walk amidst your people, raising their spirits.”

Cardinal Bo: “Sanctions risk collapsing the economy, throwing millions into poverty. Engaging the actors in reconciliation is the only path.”

Then, seeking a way ahead, he suggested to Ms. Aung San Suu Kyi, as he had done to the military, that perhaps the coup may have been due to “a lack of dialogue and communication and lack of acceptance of one another.” He urged her to “please listen to others.”

Then he reminded government officials and leaders of international organizations that “history has painfully shown that abrupt conclusions and judgments ultimately do not benefit our people.” He recalled that “sanctions and condemnations brought few results. Rather, they closed doors and shut out dialogue.”

Indeed, he said, “these hard measures have proved a great blessing to those superpowers that eye our resources.” His reference to “superpowers” was likely made with China and perhaps Russia in mind.

He appealed to the international community, particularly the nations of the West, “We beg you do not force concerned people into bartering our sovereignty.” He urged Western leaders “to deal with the reality, understanding well Myanmar’s history and political economy” and suggested that “sanctions risk collapsing the economy, throwing millions into poverty. Engaging the actors in reconciliation is the only path.”

Cardinal Bo concluded his message in prayer: “I write with prayers and hope that this great nation, this golden land of a graceful people will enter into the global stage as a reconciled community of hope and peace. Let us solve all disputes through dialogue.