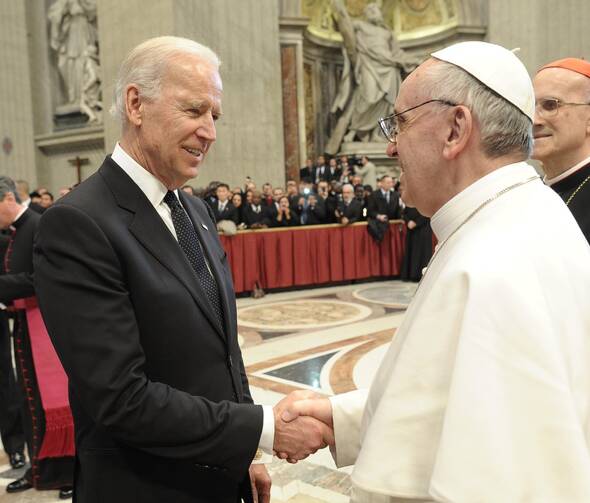 When it became clear that then-Cardinal Jorge Bergoglio had secured enough votes to be elected pope, Austen Ivereigh recounts in The Great Reformer, Cardinal Cláudio Hummes turned to him and said: “Don’t forget the poor.”

Pope Francis took that advice to heart. Indeed, the message reflected who he had already been as a priest and bishop.

It is seven years later and another Catholic head of state has taken office: Joe Biden as the 46th president of the United States of America. As he surveys the country he now leads, he might remember the words of Cardinal Hummes and allow them to bring out the best in him.

Mr. Biden will have to choose to remember the poor. To state the obvious, he will not spend his days surrounded by the poor but by the wealthy, the educated and the powerful.

Democrats are in a jubilant mood, and even some Republicans are breathing a sigh of relief. But Mr. Biden is no longer running against Mr. Trump. He is now running against the challenges that America faces. This is no time for Mr. Biden or his supporters to rest on his laurels. It is time for difficult conversations and a lot of hard work.

There is no need to recite the litany of ills facing the United States. Mr. Biden beat the odds in unseating an incumbent president in part because that president not only failed to address many of the same problems that led to the success of his insurgency candidacy but indeed exacerbated them through four years of minimal governance culminating in a botched response to Covid-19, a clownish putsch and historically low approval ratings.

His supporters, and indeed all Americans, need to hold Mr Biden accountable. And that is where Cardinal Hummes’s words come in: Don’t forget the poor.

It can be easy to forget the poor because they usually don’t have a seat at the table. Mr. Biden will have to negotiate competing demands from multiple stakeholders in the days to come, including party elites and activists eager to prioritize their agendas in the nascent administration. He must also resolve intraparty tensions, which were laid bare during the 2020 Democratic primary season but were (largely) temporarily shelved for the November election.

In all of these interactions, Mr. Biden will have to choose to remember the poor. To state the obvious, he will not spend his days surrounded by the poor but by the wealthy, the educated and the powerful—some of whom, frankly, had helped to elect Mr. Trump.

He could take a page out of Pope Francis’ book and find ways to maintain contact with the poor. If he maintains regular Mass attendance, he will certainly hear regularly of God’s love for the poor, and in the Eucharist he can experience his own poverty embraced in God’s merciful providence. But, again, he will have to choose to remember them.

Mr. Trump mastered the art of political theater, coming to favor it over the hard work of government. Mr. Biden cannot make the same mistake.

Another way Mr. Biden could forget the poor is less obvious: the temptation to perform rather than to govern. While U.S. politics has long had theatrical elements, Mr. Trump mastered the art of political theater, coming to favor it over the hard work of government. Mr. Biden cannot make the same mistake.

The early days of the Biden administration will offer many opportunities for posturing rather than leading, possibly including a U.S. Senate trial of Mr. Trump. Such theatrics can be good for rallying one’s political base, but they can be bad for governance. And while the economically secure can survive years of absent government, others face a life-or-death situation, as Covid-19 has reminded us. Here, again, is where Mr. Biden must remember the poor, the marginalized, the vulnerable.

Catholic supporters of Mr. Biden, in particular, need to be diligent in assessing the new administration. They owe him the favor of their frank criticism, and not only on pro-life issues.

Indeed, the Biden years could be a graced moment for the so-called religious left. The love of the poor and the vulnerable is a gift the faithful can give the Democratic Party. If they diligently offer that gift, they can deepen a love of the poor among the left, achieve a focus on the vulnerable during a moment of historic opportunities and even build a counterpoint to the religious right. This would help prove to the Democratic Party that the religious left matters.

There is reason for hope. That is, if the Biden administration shows that its advocacy of the weak and the poor was not just a campaign strategy but a guiding principle as it sets its words to action.