Samantha Power, Joe Biden’s pick to head up humanitarian aid, is a fan of Pope Francis and Dorothy Day 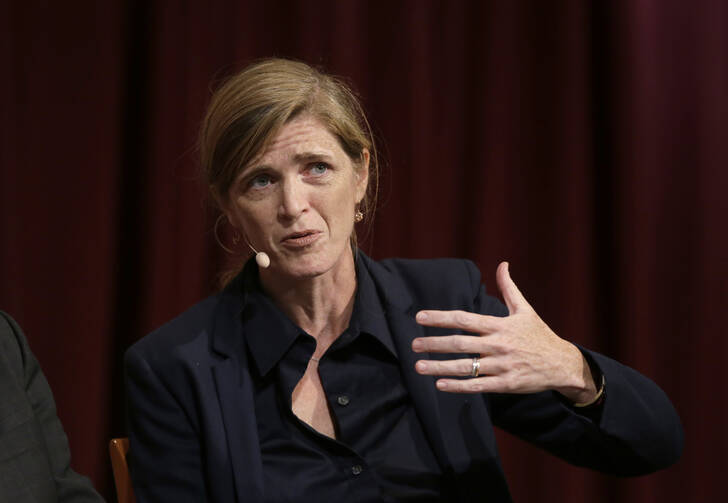 In this Oct. 16, 2017 file photo, Harvard professor Samantha Power, former U.S. Ambassador to the United Nations, addresses an audience at a forum on the campus of Harvard University, in Cambridge, Mass. President-elect Joe Biden has selected Samantha Power, the U.S. ambassador to the United Nations under President Barack Obama, to run the U.S. Agency for International Development. (AP Photo/Steven Senne)

If confirmed by the Senate, Ms. Power will head the U.S. Agency for International Development, which has an annual budget of about $20 billion. Mr. Biden also announced that he is elevating the position to the National Security Council within the White House, a signal that he will prioritize outreach to other nations.

With about 9,000 staff spread throughout the world, USAID disperses international aid with a focus on global health, military aid and assistance to help overcome natural disasters. President Trump tried unsuccessfully each year of his presidency to drastically slash the agency’s budget, but his efforts met with bipartisan congressional pushback.

Ms. Power was born in Britain to Irish parents and grew up in Dublin before relocating to the United States in 1979 when she was 9 years old. She graduated from Yale University and Harvard Law School and became a U.S. citizen in 1993. She worked as a journalist covering the Balkan wars and in 2003, she was awarded the Pulitzer Prize for her book, A Problem from Hell: America and the Age of Genocide.

“As a journalist, activist, and diplomat, I’ve seen the world-changing impact of USAID,” she said in a tweet Wednesday morning. “At this critical moment, I feel immensely fortunate to have the chance to serve again, working with the incredible USAID team to confront COVID-19, climate change, humanitarian crises, & more.”

In an interview last month with U.S. Catholic, Ms. Power recalled growing up Catholic and the sense of pride she felt in knowing how Irish Catholics throughout the world devoted their lives to humanitarian work.

“Even as a young girl, I knew this was a great Irish export: the good that so many of these priests and people of faith were doing to help people in vulnerable circumstances, particularly in developing countries.”

“Even as a young girl, I knew this was a great Irish export: the good that so many of these priests and people of faith were doing to help people in vulnerable circumstances, particularly in developing countries,” she said.

Her Catholic faith imbues her work today with “a necessary resilience,” she added.

“If something isn’t working, if the kind of cooperation that’s needed across borders is not happening or the policies by different actors are getting less humane, having this lodestar of Jesus’ teachings and life gives me an incentive to keep getting back up,” she said.

Earlier this year, she wrote a book review in The Washington Post in which she described her feeling of awe when she listened to Pope Francis praise Dorothy Day in his 2015 speech to the U.S. Congress.

“When I heard Day’s name, I looked around the chamber, wondering if anybody else was struck that he had included her,” she wrote, recalling Ms. Day’s radical life of pacifism and solidarity with the poor. “Despite this colorful past, nobody in the U.S. House chamber seemed to react to her inclusion.”

Ms. Power also tweeted support for Pope Francis’ comments that seemed to support same-sex civil unions, predicting his words would “ultimately have a profound impact on how gays and lesbians are treated around the world. The Pope’s views, heard by the over 1 billion Catholics worldwide, have incredible power.”