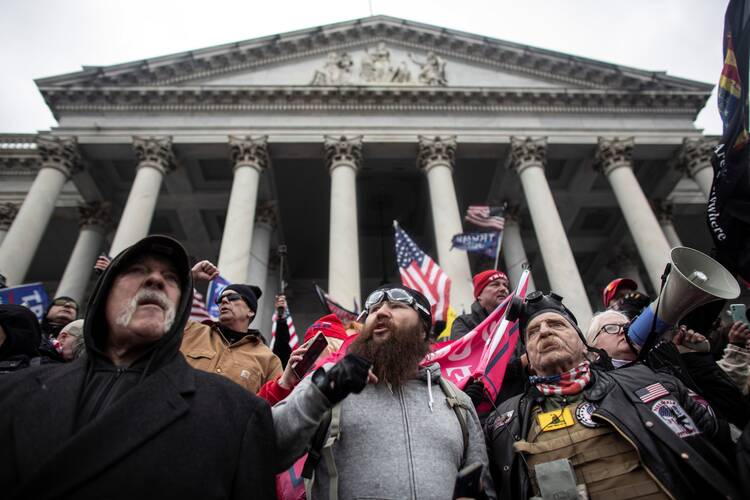 Supporters of President Donald J. Trump breach the U.S. Capitol in Washington Jan. 6, 2021, during a rally to contest the certification of the 2020 presidential election. (CNS photo/Ahmed Gaber, Reuters)

On Wednesday, Jan. 6, 2021, rioters attempted to overthrow the government of the United States. One took down an American flag and replaced it with a Trump 2020 flag. Flags matter. They are standards carried in battle. They are raised on military bases, flown on ships. They represent ownership, belonging, sovereignty, community. They are a physical representation of a state, and what that state represents.

A friend of mine has often wondered why Trump flags seem to be more popular than standard political yard signs. Maybe it is that yard signs are free, but flags are a commodity that can be sold. But perhaps the symbolism runs deeper. Flying a flag other than the American one might represent something much more sinister—a reminder of our own American history, and the inability of our country to live up to its founding promises. What does it mean when insurrectionists raise a flag, not with the union of 50 states, but with a man’s name?

What does the American flag represent? There is a sacred agreement in the United States. It sits at the core of our political community: Transfers of power are completed peacefully. We agree to this very basic premise, to resolve disputes and elect governments without violence, in exchange for the too-often unfulfilled promise that every person has a voice in the government.

There is a sacred agreement in the United States. It sits at the core of our political community: Transfers of power are completed peacefully.

Every self-styled “patriot” who stormed the Capitol on Wednesday disgraced that legacy. These insurrectionists spat on the graves of every person who gave their time, their talents, their efforts and often their lives in support of the most fundamental American promise: that our government is one of, by and for the people. Is this really who we are?

The answer is, of course, yes. The image of a Confederate flag flying in the U.S. Capitol just a few days ago is who we are, as a country. It is who we have always been. In our founding documents, we relegated all persons of a certain skin color to a percentage of a human being. We counted Black Americans as property, not people.

I enlisted as a U.S. Marine in 2008. I loved this country for what it could be, and in spite of what it all too often is.

One hundred and sixty years ago, millions of Americans took up arms to keep humans in bondage. In the 156 years since that bloody conflict ended, some Americans have used violence, coercion and fear to prevent other Americans from exercising their franchise. The poor, women, workers, people of color—there is an endless history of some in this country trying to keep others from the ballot box, from having an equal say in who governs this land. Wednesday was not an aberration, but instead a stunning reminder of the flaws and sins at this country’s heart.

I enlisted as a U.S. Marine in 2008. I loved this country for what it could be, and in spite of what it all too often is. Fascists in this country too frequently don some perverted version of the uniform I wore. They want to co-opt the good will Americans feel towards the military. I am often made uncomfortable by the fact that the connection they seek to draw is not too far from the mark. I exercised violence on behalf of the state. I am not always sure it was in defense of that democratic promise I hold so dear.

But I cannot allow the mob who sought to interfere with a democratic election speak for me. I cannot allow them to desecrate what others have given so much for. Those who seek to betray the promise of our founding documents must be held to account. And the president who incited them to take violent action must be removed from power.

Wednesday was a shameful day in our nation’s history, but an indicatory one. The storming of the Capitol is yet another sad example of how power in the United States, specifically white power, seeks to silence and suppress our democratic will: we the people. I may not have always been defending that democratic promise when I was in uniform. But as a civilian, I must. We as a country must defend that democratic promise from all enemies, foreign and domestic. Wednesday reminded us of who we are. We now must decide who we want to be. Which flag will we fly? 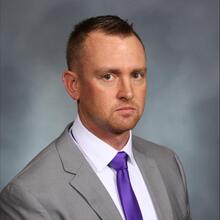 Peter Lucier is a Marine veteran (2008-2013), a member of the veterans organizing group Common Defense and a law student at Saint Louis University School of Law.

@PeterLucier
Show Comments ()
Join the conversation: Login or create an account
Before you can comment, you need to update your profile to include your first and last name, as required in our comments policy. Then reload this page and you'll be set up for commenting. Update your profile