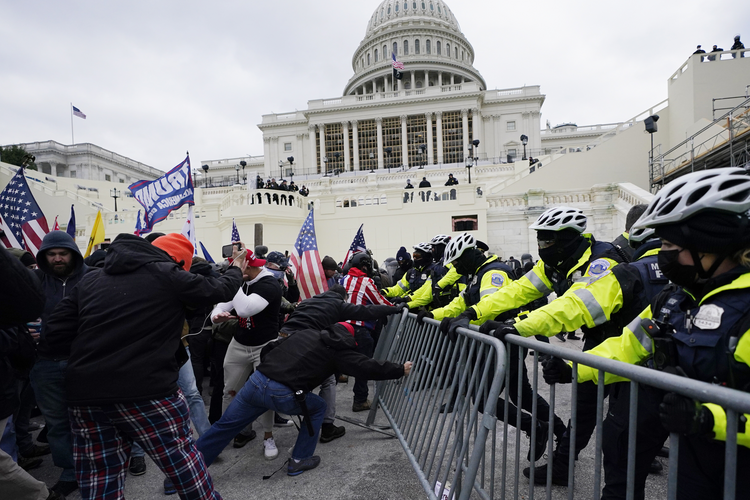 Trump supporters try to break through a police barrier on Jan. 6 at the Capitol in Washington. (AP Photo/Julio Cortez)

And then tweets lost control of flesh.

Was all this foreseeable? We knew neither the time nor place, but sooner or later, the glorification of violence was going to lead to actual violence.

Sooner or later, the glorification of violence was going to lead to actual violence.

An important casualty of recent years in U.S. politics has been our purchase on reality. Some of the best commentary on Trump-era politics, and from conservatives at that, concerns the politics of fantasy.

Last month in Commentary magazine, Yuval Levin described the Trump administration as the “hyper-rhetorical presidency,” an extension of the political scientist Jeffrey Tulis’s description of the modern U.S. chief executive as “the rhetorical presidency.” Mr. Tulis had argued that U.S. presidents increasingly speak directly to the people through the mass media, bypassing Congress. But Mr. Levin sees Mr. Trump taking this a step further: “Trump seemed to understand the power of the presidency as fundamentally rhetorical—a way of changing reality by saying it should be different, or insisting that it was.”

One could respond to Mr. Levin by noting the Trump administration’s policy victories. As McGill University’s Jacob Levy summarized it in 2018: “Ignore Trump’s inflammatory language. Ignore the words. What counts is the policy outcomes.”

But ideas have consequences. Mr. Levin diagnoses the promise and peril of populism of the sort Mr. Trump espouses: It gains popular support by appealing to the pain and suffering of voters, but in order to be effective, it has to distinguish the real from the illusory. “Fevered conspiracies,” as opposed to phenomena like economic inequality, “can’t be redressed through acts of governance because the problems they describe aren’t real, and so politics can only take them up rhetorically—by voicing them or somehow acting them out.”

For Mr. Trump and many of his enablers, words were a game. Many of his supporters, unfortunately, were not in on the con.

This is precisely the temptation many leading Republican politicians have succumbed to in recent weeks. There is no proof that last year’s presidential election was fraudulent or “stolen,” but this claim made for fine political posturing. And, one might cynically ask, what else is being a president or senator but posturing?

But reality has a way of reclaiming the narrative. For Mr. Trump and many of his enablers, words were a game. Many of his supporters, unfortunately, were not in on the con.

In a nation so full of real, complex problems, it is perhaps no surprise that so many people would be willing to believe the lies: They are shiny counterfeits of these real problems. And in a nation so full of real hurts and pains, it is no surprise that many grifters would be willing to stoke the violence inspired by the lies: It is a counterfeit of real solutions.

As Matthew Continetti described this week’s insurrection in the National Review: “It was based on a lie, fed by myth, and culminated in violence, in vandalism, and in the desecration of the people’s house.”

Christians should see more clearly than most the incentives people have to lie and to believe the lies told to them.

In December, Ross Douthat wrote in The New York Times about the disjunct between “dreampolitik” and “realpolitik,” asking “whether eventually the dreamworld narratives will force a crisis in the real one.” The answer turned out to be yes.

The Republican Party nominated and elected Mr. Trump. It defended him against impeachment and indulged his election-stealing fantasies. Those fantasies have now led to violence. In the hallowed chambers of the U.S. Capitol, gullible Trump supporters put on a farcical and ultimately nihilistic display on their master’s behalf. This was not a little ironic because this is the very nihilism that Mr. Trump supposedly campaigned and governed against with his “law and order” approach.

The future of the Republican Party hinges on a choice: Will it reject the politics of fantasy? If it does not, then the violent theatrics of Jan. 6 will not be an isolated event.

Christians ought to know a thing or two about sin and self-deception, the greatest guide of which is St. Augustine. The truth confronts us with our failures and foibles but also the grace and mercy of Christ. Lies are comfortable, and many profit from them. Christians should see more clearly than most the incentives people have to lie and to believe the lies told to them. If we cannot de-escalate the conflictual and selfish divisions in politics, who can? If we do not care about the reality at the heart of which is the Eucharist, who will?

The path toward understanding is hard and slow. But it is clear that politics must remain anchored in reality. This sounds painfully obvious, but apparently it is not. We may forget reality. But it will never forget us.