‘This has got to stop’: Catholic leaders react to Trump supporters’ attack on the Capitol 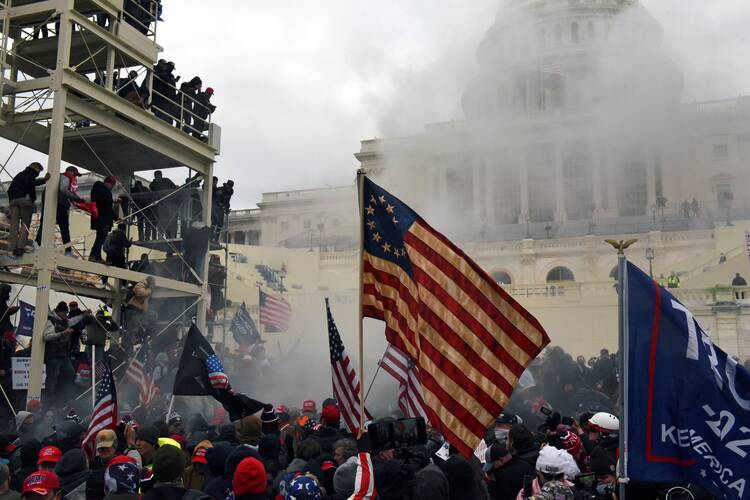 Catholic leaders began responding to the siege by supporters of President Trump on the U.S. Capitol building on Wednesday, condemning the action and calling for peace.

Archbishop José Gomez, the president of the U.S. Conference of Catholic Bishops, condemned the violence, saying in a statement, “This is not who we are as Americans.” He also offered prayers for members of Congress and law enforcement.

“The peaceful transition of power is one of the hallmarks of this great nation. In this troubling moment, we must recommit ourselves to the values and principles of our democracy and come together as one nation under God,” Archbishop Gomez said. “I entrust all of us to the heart of the Blessed Virgin Mary. May she guide us in the ways of peace, and obtain for us wisdom and the grace of a true patriotism and love of country.”

“Our hearts are heavy as we witness the shocking and unlawful protests occurring in our nation’s capital. We fervently pray for peace and for God’s protection over our country, our lawmakers, and all those in harm’s way this terrible day,” Archbishop William Lori of the Archdiocese of Baltimore said in a statement. “May peace-loving Americans of good will throughout the United States come together to engender peace, reconciliation and healing in our wounded and broken nation, which remains and must always be one, under God.”

“To the deaths from a pandemic and destruction wreaked on people's livelihoods, we do not need to add an attempted civil war.”

Archbishop Salvatore Cordileone of San Francisco said in a statement, “To the deaths from a pandemic and destruction wreaked on people's livelihoods, we do not need to add an attempted civil war.”

Writing in America, the Rev. Bryan Massingale said President Trump and his supporters are responsible for today’s violence. “Make no mistake, this is the only place that the presidency of Donald Trump could lead: a violent assault upon the nation’s democracy,” he wrote.

Other Catholic leaders weighed in on social media, urging prayer and calling on President Trump to condemn the action.

What a sad day for our country. May God bless us all.

Trump protesters breach the security fence at the US Capitol. Pence has to be rushed to secured location. This is the America #Trump and his followers want—fear, violence, and hatred. This spectacle is disgusting. #DomesticTerrorists

Lord, please heal our hearts and heal our nation.

Praying for swift end to this violence and all who are responsible be held accountable!

Simone Campbell, S.S.S., head of the Catholic social justice lobbying group Network, is expected to be part of an interfaith call that the Biden-Harris transition organization will host Wednesday night, an event they described as a “time of prayer for peace and the welfare of our nation.” Earlier in the day, Sister Campbell called on President Trump to urge calm.

This evil movement revolves around Donald Trump's baseless claims and holds his racist, discriminatory unjust policies as its only deity. Today and for years to come, every American must answer this hateful, white supremacist effort to subvert a fair election with total rejection

Several bishops took to social media to call for prayers.

Bishop Nicholas DiMarzio of the Diocese of Brooklyn tweeted: “Please join me in praying for our Nation on this unprecedented day of national chaos, so that we can return to the rule of law. We are better than this. We as a people have always respected our differences. The peaceful transfer of power is the hallmark of our democracy.”

Bishop Thomas J. Tobin of the Diocese of Providence tweeted that he would say “Holy Mass for our troubled nation. In this holy season, as we continue to observe the Birth of the Christ Child, may peace, harmony, unity and fraternity be restored in our country. May God bless and guide America!”

[Related: The Racist Attack on Our Nation’s Capitol]

Bishop Thomas Daly of the Diocese of Spokane tweeted, “Given the breach of the Capitol by protestors, I’ll be praying the Rosary,” and the U.S. Conference of Catholic Bishops tweeted, “Lord God of peace, hear our prayer.”

Bishop Robert Barron, an auxiliary bishop in the Archdiocese of Los Angeles, released a video in which he condemned “violent riotous mobs inside the U.S. Capitol.”

“To see violent people invading that civilly sacred space was what was so, so disturbing and so unnerving,” Bishop Barron added. “This has got to stop,” he said. “And I say that as an American but, again, also as a Catholic bishop.”

Bishop Barron: “To see violent people invading that civilly sacred space was what was so, so disturbing and so unnerving. This has got to stop. And I say that as an American but, again, also as a Catholic bishop.”

The head of the Catholic peace organization Pax Christi USA said in a statement that President Trump and his supporters must be held responsible for today’s actions.

“The events unfolding today at the U.S. Capitol are the result of the demagoguery of one man, President Trump, and the failure of all those—politicians, media, family, and more—who excused, overlooked, dismissed or otherwise encouraged the hateful and divisive rhetoric that has defined this president’s term in office,” said Johnny Zokovitch, the executive director of Pax Christi USA.

The Catholic Health Association, which represents Catholic hospitals, published a “prayer for peace in national violence,” asking God to be “with our country in this moment of violence, division, and turmoil.”

The Rev. Frank Pavone, the head of the controversial anti-abortion group Priests for Life who was once a member of Mr. Trump’s Catholic outreach group, tweeted: “These Democrats are hypocrites. Biden should shut up; he has no authority to talk right now. He is a fraud & he is not the president-elect. The rest of these sanctimonious, self righteous Democrats should stop complaining. They tried to steal the election & want us to accept it!”

Congress was meeting today to certify Mr. Biden’s Electoral College victory. Several Republican members of Congress objected to the process, claiming without evidence that the election had not been carried out fairly. Members of the House and Senate were forced to shelter in place after protesters attending a rally for President Trump stormed the Capitol and made their way inside.

President-elect Joseph R. Biden Jr., spoke from Wilmington, Del., this afternoon, calling the action “a reminder, a painful one, that democracy is fragile.”

Shocking images of protesters, some carrying Confederate flags and wearing Trump paraphernalia, vandalizing congressional offices and roaming freely on the House and Senate floors flooded social media. At one point, a member of Congress was filmed crouching behind a row of seats and praying for safety.

President-elect Joseph R. Biden Jr., spoke from Wilmington, Del., this afternoon, calling the action “a reminder, a painful one, that democracy is fragile.”

“To storm the Capitol, to smash windows, to occupy offices, and to threaten the safety of duly elected officials is not protest. It is insurrection,” he said. “The world is watching, and like so many other Americans, I am shocked and saddened that our nation, so long a beacon of light, hope, and democracy has come to such a dark moment.”

In a letter to House members sent Wednesday evening, Speaker of the House Nancy Pelosi called the siege “a shameful assault” on U.S. democracy.

“Today January 6—the Feast of the Epiphany—let us pray that this instigation to violence will provide an epiphany for our country to heal,” Speaker Pelosi wrote.

For his part, President Trump tweeted a recorded video addressed to protesters telling him he loves them but urging them to return home. He repeated his fraudulent claims that the election was “stolen.”