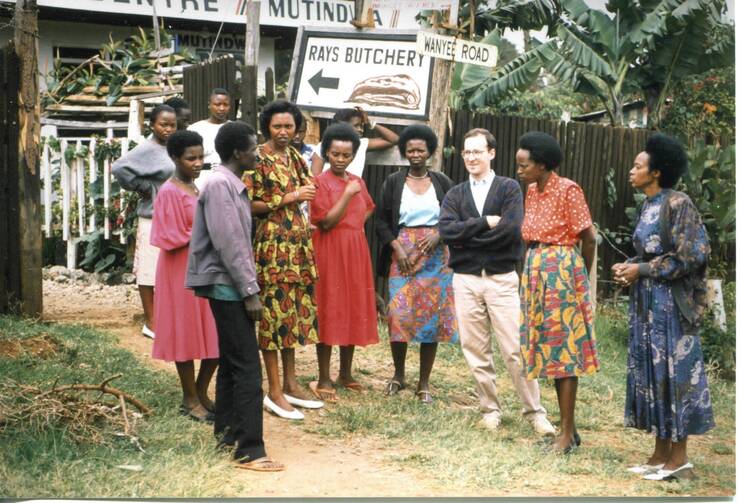 James Martin with Rwandese refugee women from the Splendid Tailoring Shop and School, a Jesuit Refugee Service-sponsored project, meeting with the shop's Kenyan landlord, in Nairobi, Kenya, in 1993. (Photo provided by James Martin)

This article originally appeared in a January, 23, 1993 edition of America.

Off a dusty road in the Kenyan town of Thika, about 30 minutes north of Nairobi, lies the Thika Reception Center, a camp for refugees from all over East Africa. It is an unusual location for a Kenyan camp, as most are situated along the borders—closer to the influx of the almost 400,000 refugees who have come to Kenya. Because I work with refugees in Nairobi, I thought it would be a good idea to see the place that fig­ures in many of their lives. One man I interviewed in Nairobi told me his own story of flight and of his efforts to stay out of such a camp.

My name is Ali. I am 53 years old. My father was a tailor in a hospital in Somalia for 30 years, and he died in 1974. My mother died when I was very young. My family lived in Mogadishu. Mogadishu is now destroyed, but before the dictatorship of Siad Barre, it was a small city where people lived in peace. At the age of 17, I left Mogadishu to study in Italy-this was before the independence of Somalia. I studied in Florence, a city I liked very much. I have many good impressions of Florence, a city full of culture and very beautiful. In the University of Florence, I was studying for my doctorate in philosophy. After I fin­ished my oral examinations in Florence, I went for two years’ study in Germany.

Thika was designed as a temporary holding camp for roughly 300 to 500 refugees, but now holds over 5,000 people—mostly Somalis, Ugandans, Ethiopians and Sudanese. Many have been there for three or four years, awaiting repatriation to their home countries or resettle­ment in places like Canada and the United States.

The camp itself resembles many of the slums scattered throughout Nairobi. Mud houses, ears of corn roasting over small charcoal fires, open sewers and trash every­where. There is a lack of toilet facilities (enough to accommodate only the original 500 people) and a result­ing foul smell in most areas of the camp.

I was surprised to see a few shops or kiosks selling sodas and other small items. There was even a shop tucked under a tin roof in the middle of the camp that sold small chairs and stools. But unlike the slums in Nairobi, the Thika camp is bordered by barbed wire and patrolled by Kenyan police officers.

After I graduated, I returned to Mogadishu, where I taught at the University, which is very small. First I was teaching full-time, and then part-time. For about 25 years I was teaching philosophy of law. For many years, I waited to get married, because my father had two wives, and each one had five children. I waited such a long time because I had to earn money for my brothers and sisters. In 1981, I married my wife Asha, and I have six children. The first baby died when he was small, only two years old.

The people’s houses are simple. Some refugees brought in a small amount of money with them, and have been able to purchase wood for small shelters. Most, however, live in plain mud houses held together with branches.

Most of the men and women there spend a good deal of time squatting in the doorways of their mud homes, waiting.

Malnutrition is a problem, particularly among the chil­dren. Malaria is also common. Rice is served twice a day, and meat, according to the people with whom I spoke, is a rarity. “Look what we get to eat here,” said a young Ethiopian man approaching me. He held out a large bowl of rice. I asked him how many times a day he ate.

“Twice a day, Brother.” “Is that enough for you?” “It is not. This is all we get. Just rice and maybe some corn. I am always hungry. And he is hungry too,” he said, pointing to his son.

I was living in peace in Mogadishu with my family. But there were many tribal problems in the country, and my tribe is in the minority. I stayed in Mogadishu until December 1991. The war was tragedy, tragedy. The atrocities were very, very prevalent, with people dying in the streets. There were many tanks and the soldiers all had machine guns. They were using mortars. The situation was bad, ­very dangerous.

There is one social worker for the entire camp, who must cope with an enormous caseload of hundreds of people, all with severe problems—hunger, sickness, fam­ily worries, resettlement problems and fear. She finds it difficult to deal with the endless stream of cases and the fact that all of the people she sees want similar things. “They all want more food,” she said. “But I have to tell them, if I give their child more food, I have to do the same with everyone. What else can I do?”

Apart from waiting for food, there is very little to do at Thika. There might be a soccer ball that the children can use on the large, barren dirt field, but it is a precious commodity. Most of the men and women there spend a good deal of time squatting in the doorways of their mud homes, waiting.

During the night of Dec. 11, 1991, we left Mogadishu with the help of a gunman I had paid money to. I left with my wife and four children. My wife was pregnant—five months along. We were all frightened. Fortunately, we had strength. And it was life or death. It was impossible to stay in Mogadishu. Every day 100 or 200 people would be killed.

Here we must all sur­vive together.

A wide array of East African faces surrounded us in the camp: darker-skinned Sudanese women carrying clay water jugs on their heads; bearded Ethiopian men talking outside the small Ethiopian church in the camp; young olive-skinned Somali boys with long plaid cloths wrapped around their waists, walking hand in hand; Somali women wearing vividly colored, patterned fabrics. Surprisingly, however, there are few fights, even with so many ethnic groups living together. I asked one Ethiopian man why he thought there was little violence. “Here we must all sur­vive together,” he said, “so we cannot fight.”

The children, in particular, mix freely, speaking English, Swahili, Amharic and Arabic, seemingly uncon­cerned with any differences separating them. And most of them appear very much at home in the camp. Indeed, one resident told me that many boys and girls, in the past few years here, have grown into adulthood.

First we went to Uanle Uen, a town 90 kilometers from Mogadishu. It is a small farming town. I thought it would be very quiet. But after four months, the soldiers of Siad Barre came, and there was new aggression. So my family and I escaped from Uanle Uen to Kenya on foot.

All my things, all my family... for 29 days, we walked. After five hours of walking, we would stop to prepare a little food and water for the children. There were nomads who would bring us water. We were all worried, the chil­dren especially. We would sleep on the ground. For 29 days. And much of the time we were very sick.

On May 8, 1992, my wife was delivered of a child in the hospital at the refugee camp at El Wak, in Kenya, with no complications and without problems, thanks to the goodness of the people and the local authorities who helped us.

Our visit provoked a great deal of curiosity, and many of the people were interested in talking to us. I was stopped a number of times by people running up to me to ask questions. “Have you come from America?” “Can I call you if I get to Nairobi?” “Do you have any money, Brother?” “Will you take me back to Nairobi with you?”

One young Ethiopian refugee greeted me, and asked me who I was and why I had come to Thika. I told him I was a Jesuit and worked with refugees. “Oh,” he said, smiling, “you know that the gifts of the Holy Spirit are faith, hope and love, and the greatest of these is love.” And then he ran off into the maze of shacks surrounding us.

Finally, we were able to get some protection letters and we arrived in Nairobi. But now I have nothing. I haven’t any money. I haven’t any job. My family is worried, worried. And in Nairobi, the police never leave us alone. One day, they wanted to take me away—to one of the refugee camps. But I told them: “I cannot go. I am ill.” Finally, I had to give each of them 50 shillings and they released me.

My family is always closed up in the house. But the police know where we are. They don’t come in the house, but they wait in the streets. When they see you in the street, they catch you—like fish. I have five children, all small. My health is not good. I want to go somewhere else now because my family is very, very worried—very afflicted. We just want peace now.

As I was leaving Thika, a small Sudanese boy wearing an oversized T-shirt and faded blue shorts approached me. He had fashioned a toy out of a straightened wire hanger that he had connected to a pair of tiny wheels from a toy car. He pushed the wheels in endless circles in the dirt. He looked up and said quietly, “Unaenda wapi?” “Where are you going?” I told him I was returning to Nairobi. “Oh,” he said, staring at the ground. “Ninakaa hapa.” “I’m stay­ing here.”

More stories from America:
-From 1996: James Martin, SJ, on the stories of East African refugees
-Were Jesus, Mary and Joseph refugees?Yes.