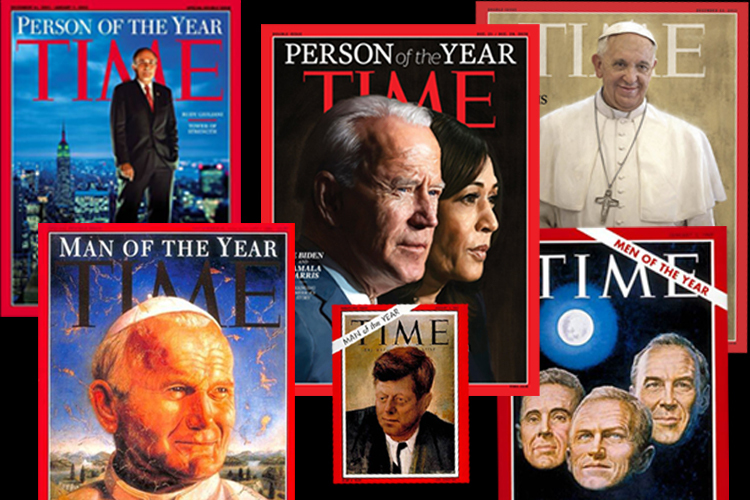 Joe Biden and Kamala Harris are Time magazine’s Person of the Year! Disregarding Time’s terrible grammar (even Christians don’t call the Trinity one person, you philistines), it is a moment Catholics should be proud of, for it is only the 15th time in 108 years that a papist took the crown.

Who cares? Catholics do. We’re always looking for that little boost in U.S. society that makes us feel fully American, as true-red-white-and-blue as our Protestant brethren. A Catholic president is the tops, the Coliseum, the Louvre museum. But for him to be Person of the Year? Francis Albert himself was never Person of the Year. Nor Fulton Sheen! “But you had a Catholic president in 1960,” some might complain, “and the front-runner in 1968!” Yes, true. They were both murdered.

With no small bit of swagger, we present to you: Catholics who were Time’s Person of the Year.

That Uncle Joe (our own Uncle Joe; Stalin was weirdly Time’s Man of the Year twice, in 1939 and 1942) is on the cover of a national news magazine is even better. Jesuits and their lay colleagues still talk about the 1960 Time issue that had John Courtney Murray, S.J., on the cover, and in 1973 Pedro Arrupe, S.J., got the honors, with a headline only a Jesuit could love: “The Jesuits: Catholicism’s Troubled Front Line.” One also doesn’t have to look far in certain Catholic circles to find a framed cover of the 1971 issue of Time with the Berrigan brothers on the cover. Even Paul Simon got in on the enthusiasm, with the following lines in “Me and Julio Down by the Schoolyard”:

In a couple of days, they’re gonna take me away
But the press let the story leak
And when the radical priests come to get me released
We was all on the cover of Newsweek.

And so, with no small bit of swagger, we present to you: Catholics who were Time’s Person of the Year.

1. Pierre Laval, prime minister of France, 1931
Pierre Laval was the first Frenchman ever to receive the honor of being Time’s Man of the Year. He spearheaded efforts to support Herbert Hoover’s moratorium on debt repayments from World War I, hoping to end the international monetary crisis that had come about as a result of excess spending two decades earlier. Famously, he pushed back against President Hoover during a French-American conference and stood his ground to ensure better conditions for the French.

2. Konrad Adenauer, 1953
The oldest-ever Time Person of the Year, at 77 years and 364 days on the day of the announcement, Konrad Adenauer, the chancellor of Germany, was a devout Catholic and a member of the Catholic Centre political party in Germany. He was re-elected as chancellor of West Germany in 1953 and was recognized for his efforts for peace and cooperation in the midst of political uprisings.

3. Charles De Gaulle, 1958
The architect of the fifth republic of France became president in 1958 and began working on the country’s new constitution. The former general who had fought against Nazi Germany was raised in a devout Catholic family, and his faith has been the subject of recent study, as biographers have made suggestions about the ways his Catholicism connected with his French patriotism and informed his political and military convictions.

4. John F. Kennedy, 1961
1961’s Man of the Year was John F. Kennedy, the first Catholic president of the United States. Raised in an elite Irish Catholic family, President Kennedy had declared during his campaign in 1960 that he was “not the Catholic candidate for president. I am the Democratic Party’s candidate for president, who happens also to be a Catholic.” Say a prayer for him, preferably next to the portrait of him hanging in your mother’s house.

5. St. John XXIII, 1963
Beloved “Good Pope John” has been elevated to sainthood in the Catholic Church, a far greater honor than his 1963 recognition as Time’s Man of the Year. He gave us “Pacem in Terris” and convened the Second Vatican Council.

Beloved “Good Pope John” has been elevated to sainthood in the Catholic Church, a far greater honor than his 1963 recognition as Time’s Man of the Year.

6. Bill Anders, 1968
In 1968, Bill Anders was one of three astronauts, including Frank Borman and Jim Lovell, to board and operate Apollo 8. Their mission was to fly to the moon, though not to land on it, and to photograph the earthrise. Mr. Anders had the honor of taking that photograph, and it later became one of the most iconic photos in the history of astronavigation. Mr. Anders was raised Catholic, but looking at the earthrise gave him pause, and made him truly consider how small the Earth’s place is in the universe. “Are we really that special?” he asked.

7. Chief Judge John J. Sirica, 1973
John Sirica, an alum of Georgetown Law, served on the Federal District Court in Washington. He was the judge who mandated that the Watergate evidence be revealed, curtailing President Richard Nixon’s bashfulness with the law. It is possible that 1973 would have been a very different year without his judicial presence. Those tapes and documents were not going to out themselves.

8. Lech Walesa, 1983
The Catholic Lech Walesa advocated for liberation under the Communist regime of Poland as an electrician turned labor-leader. He founded the Polish Solidarity labor union in 1980 and was promptly incarcerated the following year until 1982, receiving his Nobel Peace Prize in 1983. Somehow, he found time between 1990 and 1995 to serve as the first democratically elected president of Poland, and has in recent years spoken out about clergy sex abuse.

9. Corazon Aquino, 1986
People Power! The wife of a murdered opposition figure, Cory Aquino was the first female president in the history of the Philippines. After her husband’s death at the orders of then-President Ferdinand Marcos, Ms. Aquino became the most prominent leader of the People Power Revolution. It was under her leadership that Marcos was ousted and exiled, and she emerged as president of the Philippines after him.

10. St. John Paul II, 1994
In 1994, Time recognized St. John Paul II as a central figure in the collapse of the Warsaw Pact and Soviet efforts to promote worldwide communism. The Polish pope was the media’s darling for many years. If you went to a World Youth Day between 1980 and 2005, you know the tune: “JP2, We Love You!”

11. Newt Gingrich, 1995
Time’s 1995 Man of the Year, Newt Gingrich, was described in his feature as politically shrewd: “All year Gingrich hammered away at his agenda. In doing so, he changed the country’s center of gravity.” The then-speaker of the House was recognized for his role in ending a Democratic majority in the House of Representatives that had previously spanned four decades. After seeing Pope Benedict during his 2008 visit to the United States, Mr. Gingrich decided to convert to Catholicism. His wife Callista is currently the U.S. ambassador to the Holy See.

12. Rudy Giuliani, 2001
During and after the devastation of 9/11, mayor Rudy Giuliani led the city of New York and a nation in shock with a voice of hope and resilience that mourned over the loss wholeheartedly while equipping the broken to envision a future beyond the destruction. Time has perhaps shown us that Mr. Giuliani is not an American beacon of sound morality or honest politics—but he was, of course, raised and educated Catholic.

13. Melinda Gates, a “good Samaritan” in 2005
Melinda Gates is a decision-making philanthropist in her own right, and in 2005 gave half a billion dollars away (with husband Bill Gates) through their foundation’s initiative to fund global public health solutions. The money they both donated during this year was the fastest money had ever been given away in modern history. Melinda and Bill Gates shared the Persons of the Year cover with another “good Samaritan,” U2’s Bono.

Pope Francis was chosen as Time’s Person of the Year for “pulling the papacy out of the palace and into the streets.”

14. Pope Francis, 2013
After being elected pope in 2013, Pope Francis was chosen as Time’s Person of the Year for “pulling the papacy out of the palace and into the streets.” The pope’s bold shift in tone during just the first few months of his time in the position drew attention from around the world and suggested a new way forward for the Catholic Church. While that approach has since brought the pope many fans and many critics, it has continued to bring international attention to the church and its causes.

15. Joe Biden, president-elect, 2020
The second Catholic to be elected president of the United States, Joe Biden is a man of faith whose humble relationship with God has been making more headlines in years of late. America’s editor in chief Matt Malone, S.J. interviewed Mr. Biden about his faith in 2015, and the president-elect’s first speech after his victory was announced quoted the lines of a famous Catholic hymn, “On Eagle’s Wings,” to the entire globe. Time magazine named him and his vice president Kamala Harris as persons of the year, “changing America’s story.” 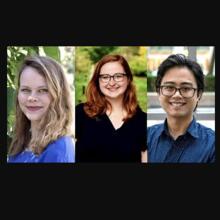