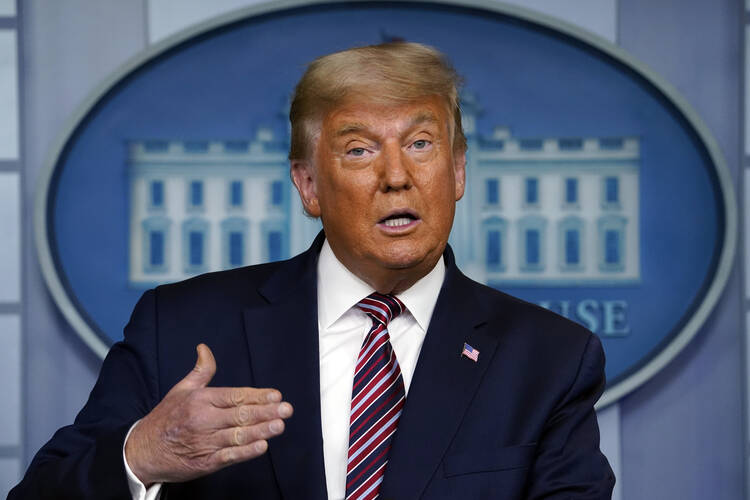 In this Thursday, Nov. 5, 2020, file photo, President Donald Trump speaks at the White House, in Washington. Although only a few of America's CEOs have made public statements about President Trump's refusal to accept his election loss, many are worried about it in private. (AP Photo/Evan Vucci, File)

As you undoubtedly know, for the first time in modern American history the defeated candidate for president is refusing to concede the election to the victor. Given what we know about him after four years in office, Mr. Trump’s refusal to acknowledge the reality of his loss may seem like more of the same. But given what we know after more than 200 years of presidential history, President Trump’s actions, or inaction as the case may be, represents a radical break with presidential norms and traditions.

Is there a law that requires Mr. Trump to offer a concession in light of the nearly unanimous judgment of state election officials and the media? No.

Is the president within his legal rights to pursue his allegations about electoral fraud through the courts? Yes, he is.

President Trump’s actions, or inaction as the case may be, represents a radical break with presidential norms and traditions.

So what is the big deal? As one Republican operative asked The Washington Post, “What’s the downside to humoring him?”

For starters, the presidential transition cannot begin in earnest without his concession. The concession is what sets in motion the multi-step, months-long process that provides for a peaceful and efficient transfer of power. We know that delays can have real consequences. The late transition following the presidential election of 2000 (which, unlike the current situation, involved a legitimately contestable outcome), may have compromised the national security apparatus just months before 9/11.

And experts say that further delays in the presidential transition now could hamper our efforts to combat the coronavirus pandemic and, even worse, endanger our national security.

But apart from those very big concerns, there is another reason why delaying the concession is dangerous for the country. The transition from one president to another, especially when the two belong to different political parties, is more than a mechanical process. After bitter electoral combat, the process is also an important way that we close the nation’s psychic wounds.

The concession is what sets in motion the months-long process that provides for a peaceful transfer of power. We know that delays can have real consequences.

A concession, in other words, is offered for the good of the country. It is not just a laurel for the victor but a kind of therapy for the loser. It brings closure. It allows the citizens who voted for the winner to celebrate and make plans. For those who voted the other way, it gives them the opportunity to mourn their loss and begin to rebuild.

This process of national healing, which traditionally begins on election night, culminates on Inauguration Day itself, when tribal partisanship gives way to our common citizenship. That is why nearly every president has included testimony to the constitutional order and the orderly transfer of power in his inaugural address, either by directly calling our attention to it or by extending an olive branch to his former opponents.

There is no law that requires a new president to do that. Yet nearly every one of them has. Republicans and Democrats, good presidents and bad, have all recognized that the constitutional order involves more than just the Constitution itself. It also involves customs and conventions, like the rule of law, civilian control of the military and the secular liturgies of enacting a peaceful presidential transition.

1961: Following one of the closest presidential elections in history, in which the White House passed from Republican to Democratic hands, John F. Kennedy opens his address by stressing our common national purpose: “We observe today not a victory of party but a celebration of freedom—symbolizing an end as well as a beginning,signifying renewal as well as change.”

1969: After another close election and in the wake of a year of turmoil throughout the country, Richard M. Nixon is inaugurated: “I ask you to share with me today the majesty of this moment. In the orderly transfer of power, we celebrate the unity that keeps us free.”

1974: Gerald R. Ford takes office after the scandal and constitutional crisis called Watergate: “Our Constitution works; our great republic is a government of laws and not of men. Here the people rule.”

Why are Republicans sticking with Trump? Peer pressure—and we’re all susceptible to it.
David Dark

1977: The White House changes parties. Jimmy Carter extends an olive branch: “For myself and for our Nation, I want to thank my predecessor for all he has done to heal our land.”

1981: The presidency changes parties again. Ronald Reagan situates the peaceful transfer in the context of a global struggle between communism and democracy: “To a few of us here today, this is a solemn and most momentous occasion; and yet, in the history of our nation, it is a commonplace occurrence. The orderly transfer of authority as called for in the Constitution routinely takes place as it has for almost two centuries, and few of us stop to think how unique we really are. In the eyes of many in the world, this every-four-year ceremony we accept as normal is nothing less than a miracle.”

1989: The inauguration of George H.W. Bush marks the 200th anniversary of Washington’s first term: “It is right that the memory of Washington be with us today, not only because this is our Bicentennial Inauguration, but because Washington remains the Father of our Country. And he would, I think, be gladdened by this day; for today is the concrete expression of a stunning fact: our continuity these 200 years since our government began.”

1993: With Bill Clinton, the presidency switches parties and passes to a new generation: “On behalf of our nation, I salute my predecessor, President Bush, for his half-century of service to America. And I thank the millions of men and women whose steadfastness and sacrifice triumphed over Depression, fascism and Communism.”

2001: George W. Bush takes office and echoes Ronald Reagan’s address from 20 years earlier. “President Clinton, distinguished guests and my fellow citizens: The peaceful transfer of authority is rare in history, yet common in our country. With a simple oath, we affirm old traditions and make new beginnings.”

2009: Barack Obama is inaugurated as the nation’s first Black president: “Each time we gather to inaugurate a president we bear witness to the enduring strength of our Constitution. We affirm the promise of our democracy.

The question remains: On Jan. 20, 2021, what will Mr. Biden have to say about this? What will he be able to say in light of the actions of his predecessor?

More Election Stories from America:
– Why are Republicans sticking with Trump? Peer pressure—and we’re all susceptible to it.
– Joe Biden said now is the time to heal. But what if Americans don’t want reconciliation
– Joe Biden will be the second Catholic president. Here’s what you need to know about his faith.
– Five faith facts about Biden VP Kamala Harris