Issues Catholics care about were also on the ballot. Here are the results. 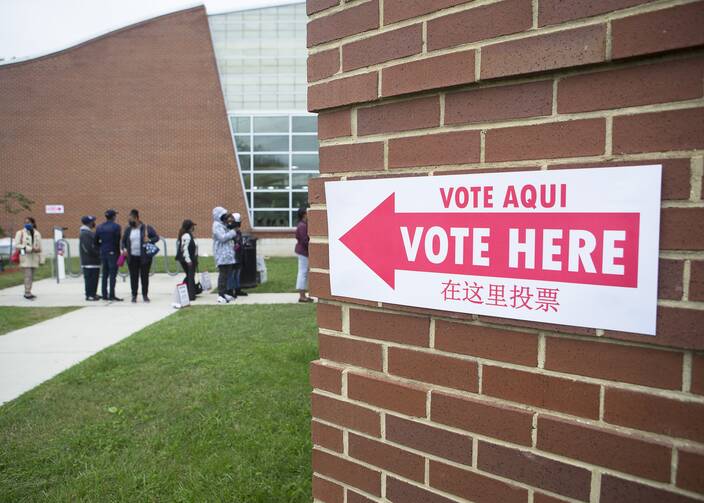 People in the Brookland neighborhood of Washington wait in line to vote Oct. 27, 2020. (CNS photo/Tyler Orsburn)

CLEVELAND (CNS) -- Lousiana voters by a wide margin Nov. 3 passed a measure declaring there is no state constitutional right to abortion, while Colorado voters defeated a proposal to ban abortion beginning at 22 weeks of pregnancy.

Unofficial results show that the Louisiana measure, known as the Love Life Amendment, passed 62.1% to 37.9%. It will add language to the state constitution that declares a right to abortion and the funding of abortion shall not be included in the document.

Despite the language being added, abortion remains legal in the state, amendment supporters said.

In Colorado, Proposition 115 went down 59.1% to 40.9%, according to unofficial results. The measure included exceptions to save the life of the pregnant woman but not for instances of rape or incest.

If it had passed, doctors who continue to perform abortions at 22 weeks would have faced a fine up to $5,000. Under the measure, the mother was not subject to any criminal penalties.

The abortion-related measures were among 120 proposed state laws and constitutional amendments on the ballot in 32 states. Other measures included those to legalize marijuana for adults, decriminalize the possession of small amounts of hard drugs and raise the minimum wage.

Louisiana's Love Life Amendment earned enthusiastic support from the state's Catholic bishops. The Louisiana Conference of Catholic Bishops twice issued statements backing the amendment in the months leading up to the vote.

The conference said the amendment "will ensure that the state of Louisiana cannot establish a right to abortion at present or if Roe v. Wade is overturned in the future."

"Secondly, it will prohibit the funding of abortion through taxpayer dollars within our constitution. Without such an amendment, the invalidation of the many anti-abortion laws we have all advocated so strongly for in Louisiana remains a possibility," the conference said.

The national organization Men for Life welcomed the Louisiana vote. In a statement, the organization said it was "excited" the amendment passed.

"The issue of abortion rights should be, and is now left in the hands of capable Louisianians, through their elected officials, and not in the hands of special interest activist judges," the organization said.

The bishops of Colorado, through the Colorado Catholic Conference, had urged a "yes" vote on the later-term abortion ban. The conference had developed an extensive outreach campaign to Catholic voters through bulletin inserts, social media posts and literature backing the initiative to create a statutory ban at 22 weeks or pregnancy.

The conference offered no immediate reaction to the results.

Proponents of the Colorado measure had to overcome a wide spending gap throughout the campaign. Through Oct. 14, the most recent date for campaign expenditure reports to be filed in the state, opponents of Proposition 115 had spent $6.9 million to contest it while supporters of the initiative spent about $405,000, according to Ballotpedia, a website that tracks the status of state issues nationwide.

The Montana initiatives drew opposition by the state's Catholic bishops.

Bishop Austin A. Vetter of Helena and Bishop Michael W. Warfel of Great Falls-Billings urged a "no" vote on Initiative 190 and Constitutional Initiative 118, which were companion proposals. They joined state leaders in business, transportation, medicine and law enforcement in opposing legalization of marijuana.

The bishops' opposition stemmed from what they described as the threat marijuana use poses to young people, the poor, and people who struggle with substance abuse and mental health challenges.

They pointed to Colorado, where recreational marijuana usage has been legal since 2012, and has led to a rise in traffic accidents and deaths where pot was a factor and a higher prevalence of marijuana in toxicology screenings of suicides.

Oregon became the first state to decriminalize the possession of small amounts of amphetamines, cocaine and heroin. Voters passed the measure 58.6% to 41.4%, according to unofficial results.

The initiative calls for people arrested with small amounts of hard drugs to pay a $100 fine and attend an addiction recovery program to avoid going to trial on drug possession charges. The plan also would fund drug addiction and recovery services.

In the District of Columbia, voters approved an initiative to decriminalize psychedelic plants and mushrooms. Ballot language said prosecution of people who use and sell such substances would be "among the Metropolitan Police Department's lowest law enforcement priorities."

Unofficial results showed the issue was passing 61.5% to 38.5% early Nov. 4. State election officials said they would wait until Nov. 5 before announcing any further results.

The amendment states that religious organizations and clergy have the right to refuse to preside at a same-sex marriage ceremony.

The measure would rescind a ballot initiative approved in 2002 that defined marriage as between a man and a woman.

In Florida, voters endorsed a constitutional amendment to raise the state's minimum wage to $15 an hour by September 2026. The amendment needed a supermajority of 60% of voters for it to be adopted. Final unofficial results showed the measure received 60.8% approval.

The state's current minimum wage stands at $8.56 an hour and is adjusted annually.