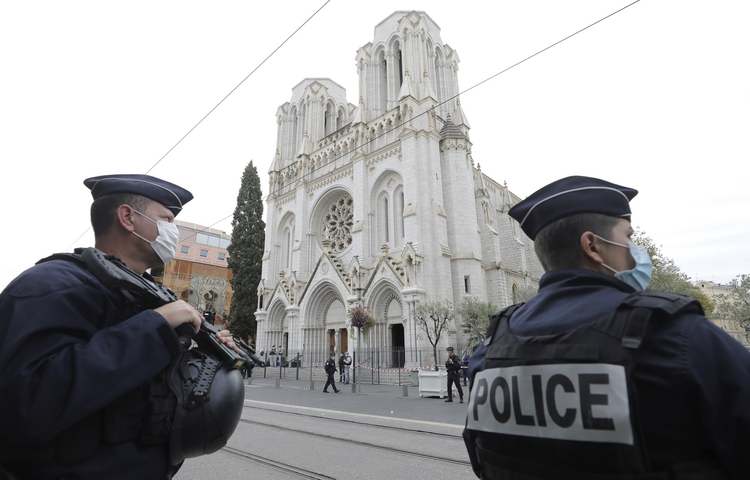 Police officers stand guard near Notre Dame church in Nice, southern France, Thursday, Oct. 29, 2020. An attacker armed with a knife killed at least three people at a church in the Mediterranean city of Nice, prompting the prime minister to announce that France was raising its security alert status to the highest level. It was the third attack in two months in France amid a growing furor in the Muslim world over caricatures of the Prophet Muhammad that were re-published by the satirical newspaper Charlie Hebdo. (Eric Gaillard/Pool via AP)

PARIS (AP) — An attacker armed with a knife killed three people inside a church Thursday in the Mediterranean city of Nice, French authorities said, prompting the country to raise its security alert status to the highest level.

It was the third attack in two months in France that authorities have attributed to Muslim extremists, including the beheading of a teacher. It comes amid a growing furor over caricatures of the Prophet Muhammad that were republished by the satirical newspaper Charlie Hebdo — renewing vociferous debate in France and the Muslim world over the depictions that Muslims consider offensive but are protected by French free speech laws.

The Vatican responded to the attack with a message addressed to Bishop André Marceau of Nice:

Informed of the savage attack that was perpetrated this morning in a church in Nice, causing the death of several innocent people, His Holiness Pope Francis joins in prayer with the suffering of the families who were affected and shares their sorrow. He asks the Lord to bring them comfort and he commends the victims to his mercy.

Condemning such violent acts of terror in the strongest possible way, he assures the Catholic Community of France and all the French people of his closeness and he calls for unity. Confiding France to the protection of Our Lady, he wholeheartedly gives the Apostolic Blessing to all those affected by this tragedy.

Bishop Marceau responded, saying: “My sadness as a human being is infinite in the face of what other so-called human beings can do.... All my prayers go out to the victims, their loved ones, the police on the front line of this tragedy, priests and the faithful who have been wounded in their faith and hope.”

It is a moment of pain, in a time of confusion. Terrorism and violence can never be accepted. Today's attack has sown death in a place of love and consolation, like the house of the Lord. The Pope is informed of the situation and is close to the mourning Catholic community. He prays for the victims and their loved ones, so that the violence may cease, so that we may return to look upon ourselves as brothers and sisters and not as enemies, so that the beloved people of France, united, may respond to evil with good.

Separately, the president of the French Bishops' Conference, Archbishop Éric de Moulins-Beaufort of Reims responded with a tweet, saying, "My very special prayers for the diocesan people of Nice and Bishop Marceau. May they know how to sustain themselves in this trial and support those who are tested in their flesh.”

Other confrontations and attacks were reported Thursday in the southern French city of Avignon and in the Saudi city of Jiddah, but it was not immediately clear if they were linked to the attack in Nice.

“He cried ‘Allah Akbar!’ over and over, even after he was injured,” said Nice Mayor Christian Estrosi, who told BFM television that two women and a man had died, two inside the church and a third who fled to a nearby bar but was mortally wounded. “The meaning of his gesture left no doubt.”

The assailant in Nice was wounded by police and hospitalized after the killings at the Notre Dame Basilica, less than a kilometer (half-mile) from the site in 2016 where another attacker plowed a truck into a Bastille Day crowd, killing dozens of people.

Shots punctuated the air and witnesses screamed as police stationed at the grandiose doors to the church appeared to fire at the attacker inside, according to videos obtained by The Associated Press. Hours later, AP reporters at the scene saw emergency vehicles and police tape lining the wide Notre Dame Avenue leading toward the plaza in front of the basilica. For a time after the attack, sounds of explosions could be heard as sappers exploded suspicious objects.

“With the attack against (teacher) Samual Paty, it was freedom of speech that was targeted. With this attack in Nice, it is freedom of religion."

France’s anti-terrorism prosecutor’s office opened an investigation into the attack, the third one since a trial opened in September for people linked to the 2015 attacks at Charlie Hebdo and a kosher supermarket by gunmen who claimed allegiance to the Islamic State group and al-Qaida. The trial is nearing its end, with a verdict planned for Nov. 13, the fifth anniversary of another series of deadly Islamic State attacks in Paris.

Thursday's attacker was believed to be acting alone and police are not searching for other assailants, said two police officials, who were not authorized to be publicly named.

“With the attack against (teacher) Samual Paty, it was freedom of speech that was targeted. With this attack in Nice, it is freedom of religion,” Prime Minister Jean Castex told lawmakers Thursday.

Earlier, the lower house of parliament suspended a debate on France’s new virus restrictions and held a moment of silence for the victims. Castex rushed from the hall to a crisis center overseeing the aftermath of the Nice attack and later returned to announce the alert level increase. French President Emmanuel Macron, who has defended Charlie Hebdo's right to publish the caricatures, arrived in Nice later in the day.

Muslims have held protests in several countries and called for a boycott of French goods in response to France’s stance on caricatures of Islam’s most revered prophet, whose birthday was marked in several countries Thursday. Soon before Thursday’s attack, supporters of religious political party Jamiat Ulema-e-Islam protested in Pakistan against Macron.

In Avignon on Thursday morning, an armed man was shot to death by police after he refused to drop his weapon and a flash-ball shot failed to stop him, one police official said. And a Saudi state-run news agency said a man stabbed a guard at the French consulate in Jiddah, wounding the guard before he was arrested.

Islamic State extremists had issued a video on Wednesday renewing calls for attacks against France.

Many groups and nations, however, issued their condolences Thursday, standing firmly with France.

The French Council of the Muslim Faith condemned the Nice attack and called on French Muslims to refrain from festivities this week marking the birth of Muhammad “as a sign of mourning and in solidarity with the victims and their loved ones.”

Turkey’s Foreign Ministry strongly condemned the attack in Nice. "We stand in solidarity with the people of France against terror and violence,” the statement said.

Relations between Turkey and France hit a new low after Turkey’s president on Saturday accused Macron of Islamophobia over the caricatures and questioned his mental health, prompting Paris to recall its ambassador to Turkey for consultations.

The attack in Nice came less than two weeks after another assailant beheaded a French middle school teacher who showed the caricatures of the Prophet Muhammad for a class on free speech. Those caricatures were published by Charlie Hebdo and cited by the men who gunned down the newspaper's editorial meeting in 2015.

In September, a man who had sought asylum in France attacked bystanders outside Charlie Hebdo's former offices with a butcher knife.

French Roman Catholic sites have been ferociously and repeatedly targeted by extremists in recent years, including the killing of the Rev. Jaqcues Hamel, who had his throat slit while celebrating Mass in his Normandy church by Islamic militants and a plot to bomb Paris' Notre Dame cathedral. Those attacks were claimed by the Islamic State group, which also is believed to have recruited a man now on trial who plotted unsuccessfully to attack a church on the outskirts of Paris.

Nice’s 19th-century basilica Notre Dame de l’Assomption is the largest church in the city, but smaller and newer than the cathedral 1 mile (2 kilometers) away. The basilica’s twin neogothic towers, standing 70 yards (65 meters) high, are a landmark feature in the heart of the city.

Lori Hinnant - Associated Press
Provide feedback on this article
Join the conversation: Login or create an account
Before you can comment, you need to update your profile to include your first and last name, as required in our comments policy. Then reload this page and you'll be set up for commenting. Update your profile