I testified against Colorado’s extreme abortion law. We deserve better. 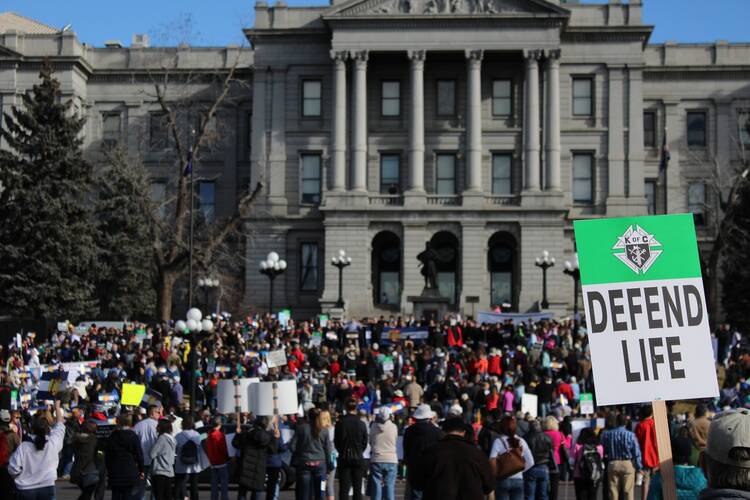 A March for Life rally in front of the Colorado Capitol in Denver on Jan. 17, 2015. (CNS photo/Eileen Walsh)

Colorado voters will decide next week whether to ban abortion, with limited exceptions, after 22 weeks. Last winter a Democratic-controlled committee in the state House of Representatives voted along party lines to prevent the bill from being debated by the full legislature. But proponents collected enough signatures to put the proposal on the ballot.

I was at the State House with Democrats for Life in March, testifying in favor of the proposal to ban abortions in the state of Colorado after fetal viability (22 weeks), except to save the life of the mother (in which case the safest route is generally to induce labor, not perform an abortion procedure that can take two to four days). Colorado law currently allows abortion for any reason until birth.

It is unusual, in our hyper-partisan age, to be squeezed into a tiny space and made to listen to each other’s thoughts for hours and hours.

Testifying at the Capitol is an experience that everyone should have at least once. In the lobby, I ran into friends waiting to testify on the other side, in favor of allowing abortion to continue for the full nine months of pregnancy. We chatted amiably and laughed nervously about the situation.

When the hearing began, everyone filed into the same small room for testimony. It is unusual, in our hyper-partisan age, to be squeezed into a tiny space and made to listen to each other’s thoughts for hours and hours. But it is instructive to listen to those with whom you disagree.

At first, I found myself scanning the room trying to discern who was who. The man with the bright red hair and the Planned Parenthood lapel pin: obviously against the ban. Women in boxy suits, full makeup and big hair: testifying in favor. It seemed that any white, female Protestant minister was there on behalf of Planned Parenthood, but the people of color who spoke at the hearing were overwhelmingly in favor of the 22-week ban. The Latina woman sitting next to me testified in favor, but she had already given herself away to me by the Our Lady of Guadalupe medal around her neck.

Explainer: Do Catholics have a moral duty to vote?
James T. Keane

A few couples testified about choosing a late-term abortion when given a prenatal diagnosis that indicated the child would not live long after birth. They were asked if they would support the ban on third-trimester abortions if an exception were made for “fetal anomalies” or “life-limiting diagnoses.” To my surprise, all of them said no, they would not support any limits on any type of abortion. Perhaps this is because, despite the emphasis on tough cases, according to a paper by James Studnicki of the Charlotte Lozier Institute, “most late-term abortions are elective, done on healthy women with healthy fetuses, and for the same reasons given by women experiencing first trimester abortions.”

I had three minutes to testify. This is what I said:

My name is Anna Keating, and I am here to testify in support of HB-20-1098—Prohibition on Abortion after 22 weeks. I am a feminist, author, small business owner and college chaplain.

Like many of you, I am also a parent. I have three small children (ages 8, 5 and 2). My kids don’t know why I’m testifying at the Capitol today. I didn’t know how to tell them that America is one of seven countries out of 198, one of only seven worldwide, that allows abortion for any reason after 20 weeks gestation in certain jurisdictions. This procedure at this point in a pregnancy is legal on demand in only 0.035 percent of all countries. That’s about as close to a consensus that you can get on any issue. The U.S. is in company with notorious human rights abusers like China and North Korea on this issue.

I didn’t want my kids to know that an abortion can be performed in the state of Colorado at any point in a woman’s pregnancy. That Colorado is one of only seven states in which there is no gestational limit. I want my kids to be proud of their state.

I didn’t want to explain to them that in Colorado, babies of the same gestational age, who in one part of the hospital would be receiving round-the-clock care from a team of highly trained professionals, could in another part of the hospital be killed without pain medication, simply because they are unwanted or have a disability or because their life, like any of our lives, might be shorter than others.

Late-term abortions are painful and deadly for prenatal children and represent substantial medical risks for women. They’re also unnecessary for women’s equality. In most parts of Western Europe—for example, Germany, Belgium, France and Denmark—abortion is prohibited after 12 weeks except in the case of [saving] the life of the mother.

This piece of legislation does not criminalize post-abortive people and should transcend the pro-life/pro-choice binary. It would put our state in line with the rest of the world in terms of human rights. Please be a voice for nonviolence and against torture and support a ban on abortions after 22 weeks.

Anna Keating is the co-author of The Catholic Catalogue: A Field Guide to the Daily Acts That Make Up a Catholic Life.