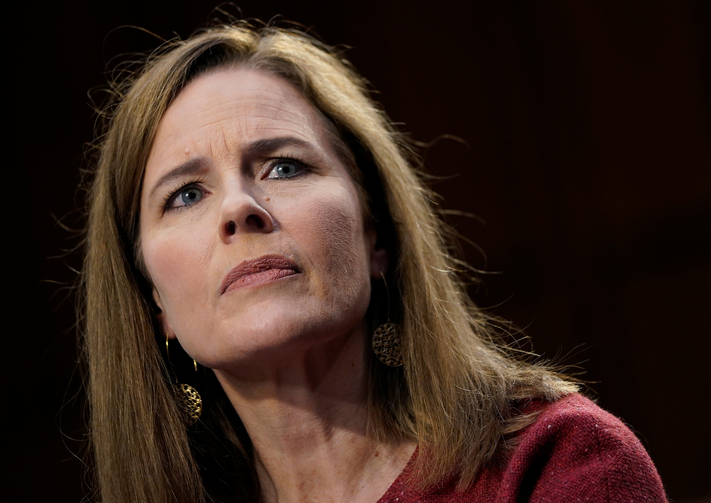 Judge Amy Coney Barrett of the U.S. Court of Appeals for the 7th Circuit, President Donald Trump's nominee for the U.S. Supreme Court, speaks during the second day of her confirmation hearing before the Senate Judiciary Committee on Capitol Hill in Washington Oct. 13, 2020. (CNS photo/Drew Angerer, Pool via Ruerters)

Senators are trying to dig deeper into the conservative judge’s outlook on abortion, health care and a potentially disputed presidential election, but Barrett has been batting away questions in long and lively exchanges, insisting she would bring no personal agenda to the court but decide cases “as they come.”

Her nomination by President Donald Trump to replace the late Justice Ruth Bader Ginsburg has ground other legislative business to a halt as Republicans excited by the prospect of locking in a 6-3 conservative court majority race to confirm her over Democratic objections before Election Day.

"She's going to the court,” Sen. Lindsey Graham, R-S.C., the committee chairman, said as the proceedings got under way Wednesday after a nearly 12-hour session the day before.

Graham said Trump had made history by nominating someone “who is unashamedly pro-life." But Graham said, as Barrett has, that she'd be able to set her personal views aside when deciding cases on abortion. Democrats worry that Barrett will vote to undermine abortion rights.

Barrett's nomination has been the focus at a Capitol mostly shut down by COVID-19 protocols, frustrating Democrats who are virtually powerless to stop a judge from confirmation. They warn she will be seated on the court in time to cast a vote to undo the Affordable Care Act next month, causing millions of Americans to lose coverage during a pandemic.

“People are fed up,” said Sen. Dick Durbin, D-Ill., criticizing GOP priorities in forcing the Senate action as the country suffers from the pandemic and Congress squabbles over approving additional economic aid.

The 48-year-old appellate court judge declared her conservative views in often colloquial language, but she refused many specifics Tuesday. She aligns with the late Justice Antonin Scalia, a conservative mentor, and declined to say whether she would recuse herself from any election-related cases involving Trump and Democratic nominee Joe Biden.

“Judges can’t just wake up one day and say I have an agenda — I like guns, I hate guns, I like abortion, I hate abortion — and walk in like a royal queen and impose their will on the world,” Barrett told the committee during its second day of hearings.

Trump seemed pleased with her performance. “I think Amy’s doing incredibly well,” he said at the White House departing for a campaign rally.

Trump has said he wants a justice seated for any disputes arising from his heated campaign against Biden, but Barrett testified she has not spoken to Trump or his team about election cases. Pressed by Democrats, she skipped past questions about ensuring the date of the election or preventing voter intimidation, both set in federal law, and the peaceful transfer of presidential power. She declined to commit to recusing herself from any post-election cases without first consulting the other justices.

“I can’t offer an opinion on recusal without short-circuiting that entire process,” she said.

A frustrated Sen. Dianne Feinstein, the top Democrat on the panel, all but implored the nominee to be more specific about how she would handle landmark abortion cases, including Roe v. Wade and the follow-up Pennsylvania case Planned Parenthood v. Casey, which confirmed it in large part.

“It’s distressing not to get a good answer,” the U.S. senator from California told the judge.

She later declined to characterize the Roe v. Wade decision that legalized abortion as a “super-precedent” that must not be overturned.

Democrats had no such reticence.

"Let’s not make any mistake about it,” said California Sen. Kamala Harris, the Democratic vice presidential nominee, appearing remotely due to COVID concerns.

Allowing Trump to fill the seat with Barrett “poses a threat to safe and legal abortion in our country," Harris said.

The Senate, led by Trump’s Republican allies, is pushing Barrett’s nomination to a quick vote before Nov. 3, and ahead of the latest challenge to the Affordable Care Act, which the Supreme Court is to hear a week after the election. Democrats warn that she would be a vote to undo the “Obamacare” law.

"I'm not hostile to the ACA,” Barrett told the senators.

The judge, accompanied by her family, described herself as taking a conservative, originalist approach to the Constitution. A former law professor, she told the senators that while she admires Scalia, she would bring her own approach.

Overall, Barrett's conservative views are at odds with the late Ginsburg, a liberal icon. She would be Trump's third justice.

Underscoring the Republicans’ confidence, Graham set an initial committee vote on the nomination for Thursday, the last day of hearings, which would allow final approval by the full Senate by the end of the month.

Protesters rallied outside the Senate building, unable to come inside the hearing room.

Provide feedback on this article
Join the conversation: Login or create an account
Before you can comment, you need to update your profile to include your first and last name, as required in our comments policy. Then reload this page and you'll be set up for commenting. Update your profile
More: Supreme Court / Pro-Life