Voting Catholic: How can Catholics help alleviate poverty in the United States? 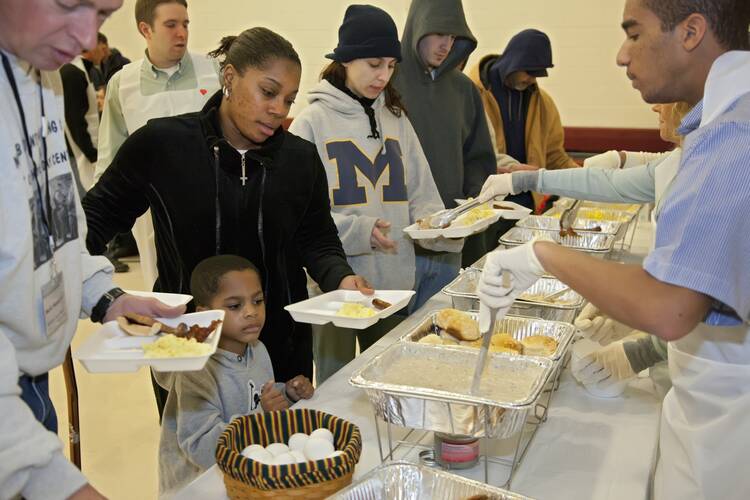 Volunteers serve breakfast to the needy at a shelter in Mount Clemens, Mich. (CNS photo/Jim West)

“I had only known Catholicism in my faith life,” she told Sebastian Gomes, an executive editor for America and host of its new podcast Voting Catholic. “I was also educated in Catholic schools. It was the only way in New Orleans to get a decent education. The public education system has been abysmal for a while due to defunding or lack of funding. And so it was well known, even young children understood, that if you wanted to receive a good education, you had to be in a Catholic school.”

Ms. Wells is the senior regional organizer for Community Change, a national organization that champions grassroots efforts, “building power from the ground up.” They do work on elections, particularly to support Black, Latino and immigrant issues.

Her life path, she said, has been determined by where she comes from as a “Black child growing up in a single-parent home.” She explained that she faced a lot of challenges growing up, most of them due to their family’s poverty. “There were difficulties sometimes in paying my tuition,” she said. “My mother struggled working multiple jobs to keep the rent paid, to keep utilities on.”

“We often did without,” she said. “That was when my faith came into play a lot, in those times.”

Hurricane Katrina was one of those times.

When Katrina hit New Orleans, it came as a shock to those in the city who prided themselves on being able to weather any storm. “What the natural disaster brought to the forefront was how precarious our economic situations are,” she said. “In order to flee to safety costs money. If you’re poor or if you’re working low-wage jobs, you don’t have a lot of discretionary funding and [that] is what you need to gas up your car to drive hundreds of miles and to book hotel rooms and to buy food and to house yourself until you know that it’s O.K. to return home.”

"Catholics should be on the forefront fighting for universal breakfast and lunches in public schools. Children need to eat to learn.”

She said that Katrina came to define New Orleans. “[People] know us as the city that was devastated by Katrina,” Ms. Wells said. “But for those who may not be aware, [New Orleans has] Black roots, deep Catholic roots. We’re known as the city, the community, that has the largest population of Black Catholics.”

Part of what Katrina taught Ms. Wells was the difference between giving to charity and truly fighting to better people’s lives. “I’ve always been around Catholic folks that have believed deeply in charity,” she said. “But it stopped there.”

She described these people as the type to give money to churches or “packed up great food baskets or distributed toys.” But a disconnect existed there. “We weren’t in the same world.... Catholics should be on the forefront fighting for universal breakfast and lunches in public schools. Children need to eat to learn.”

Seeing the devastation of Katrina opened Ms. Wells’s eyes to endemic issues of poverty in communities all around the United States. “I no longer wanted to live a strictly capitalist life,” she said. “Some of us [in New Orleans] were worse off than others, but understanding that that was my community. There was nothing that I should do for the rest of my life that would not seek to end a Katrina or the recovery from a Katrina or [to help with] the aftermath, so to speak, of a Katrina.”

“That’s what Jesus infused me to do,” Ms. Wells said. “And that is what is right. Imagine 50 million other folks coming to that ‘aha’ moment, what we could do.”

To hear more of Ms. Wells’s experience growing up poor in New Orleans and the struggles her family faced during Hurricane Katrina, make sure to listen to Voting Catholic, a new podcast by America Media that helps Catholics discern how to vote in the 2020 presidential election.