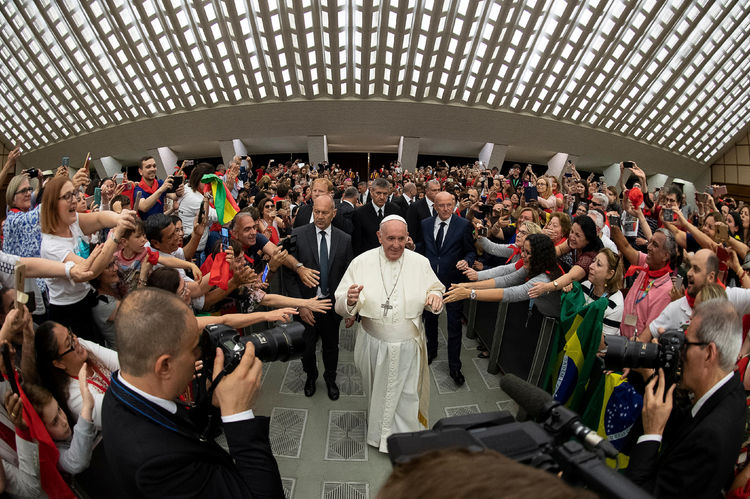 Pope Francis arrives for an audience with members of the Catholic Charismatic Renewal International Service in Paul VI hall at the Vatican June 8, 2019. (CNS photo/Vatican Media handout via Reuters)

President Donald Trump has nominated Judge Amy Coney Barrett to replace Justice Ruth Bader Ginsburg on the Supreme Court. Questions have been raised about her association with the “People of Praise,” a nondenominational Christian charismatic community. The People of Praise leave it to individual members to disclose their affiliation, and Barrett has not spoken about her membership. And so, the question remains: What is charismatic Catholicism?

Pentecostalism in the U.S.
Catholic charismatics practice forms of Pentecostalism that embrace the belief that individuals can receive gifts of the Holy Spirit.

Modern Pentecostalism in the United States began on Azuza Street in Los Angeles.

Starting in 1909, African American pastor William J. Seymour led a congregation in the city that claimed to have received miraculous gifts from God, such as prophecy and the power to heal. The movement came to be known as Azuza Street revival.

Members of the Azuza Street congregation believed that they had been given the same blessings as those received by the disciples of Jesus. According to the Bible’s Acts of the Apostles, on the Pentecost – the Jewish Shavuot harvest festival 50 days after Passover – the Holy Spirit came down in the form of flames over the disciples’ heads. Afterward, it is believed, the disciples were able to speak in languages they did not know in order to proclaim “the wonders of God.”

In Christianity, the Holy Spirit is the third person of the Trinity and is associated with God’s action in the world.

Pentecostal teachings went on to influence the Catholic charismatic movement that initially took hold in the U.S. in the 1960s.

During a 1967 prayer meeting at Dusquesne University in Pittsburgh, a group of students and professors spoke about special “charisms,” or gifts, received through the Holy Spirit.

According to firsthand accounts, faculty were deeply influenced by two books from the Pentecostal tradition, “The Cross and the Switchblade” and “They Speak with Other Tongues.”

From these beginnings, the Catholic charismatic movement has spread throughout the world.

Often a sign of baptism of the Holy Spirit is “glossolalia,” or “speaking in tongues.” Speaking in tongues refers to using an unintelligible language, which is often interpreted by someone else in the congregation. Usually glossolalia is considered a form of prayer. But other times, glossolalia is believed to contain prophecies about present or future events.

Participants in the Catholic charismatic movement also claim spiritual and physical healing associated with the power of the Holy Spirit working through believers.

Controversy and support
There are also forms of charismatic Catholicism that believe in driving out evil spirits.

A Catholic charismatic community in India that I researchedpracticed exorcism as well as faith healing. The group also had a list of evil spirits that they claimed to have dealt with.

Not all Catholic charismatic groups perform exorcisms, especially since the Vatican tightened exorcism procedures by allowing them to be formally performed only by priests. But Catholic charismatic practices remain controversial for some because they differ from mainstream Catholic worship.

Commentators disagree about whether Barrett’s membership in a charismatic religious community should be an issue in any potential nomination hearings. But charismatic or Pentecostal groups and churches represent the fastest-growing segment of Christianity throughout the world. For this reason, Amy Coney Barrett’s beliefs may be shared by many contemporary Christians.

Provide feedback on this article
Join the conversation: Login or create an account
Before you can comment, you need to update your profile to include your first and last name, as required in our comments policy. Then reload this page and you'll be set up for commenting. Update your profile
More: US Politics / US Church