Who has the ‘greenest’ Catholic diocese in the U.S? Maybe Virginia. 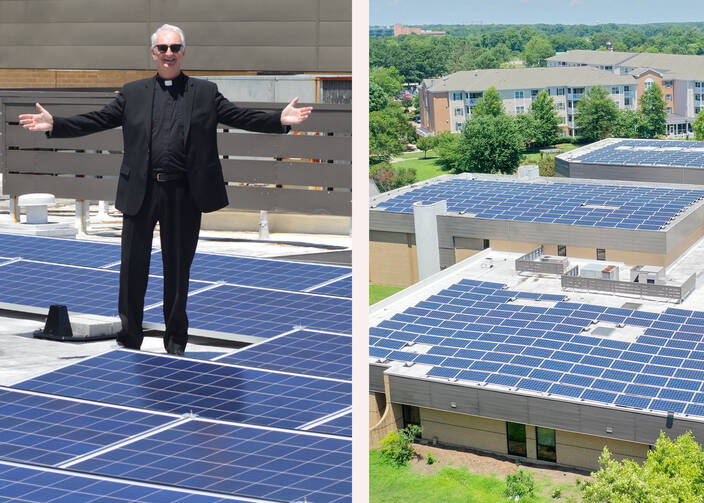 “My goal is for the Diocese of Richmond to be the greenest in the country,” Charles Mikell, the diocese’s director of real estate, told America. That dream means converting or connecting 146 parishes, 23 schools, eight nursing homes and eight cemeteries to solar energy. For a diocese that covers 33,000 square miles, about four-fifths of Virginia, the metric tons of greenhouse gas reductions could quickly add up.

The Diocese of Richmond has responded to the call to care for our common home with a project that will soon generate 1.6 million kilowatt-hours of solar electricity every year. Richmond’s solar energy production is projected to offset over 45,000 metric tons of greenhouse gas over the next 25 years. That is about the same amount of gas it would take to drive 100 million miles, according to the Catholic Climate Covenant. And these figures only reflect reductions from the first seven solar panel projects—Mr. Mikell hopes to have 10 to 15 more underway next year and to double that by 2022.

The effort, which aims to have another diocesan property outfitted with solar panels by December, has been selected as a finalist in the Project of the Year competition sponsored by Solar Builder Magazine. A winner will be selected after online voting ends on Sept. 27.

The diocese teamed up with Catholic Energies, a program of the Catholic Climate Covenant (a climate justice advocacy group that the U.S. Conference of Catholic Bishops. helped create in 2006), and began converting diocesan properties to solar energy in 2019. The Immaculate Conception Church in Hampton, Va., was the first to undergo the transformation that year. The church roof is now covered by 440 solar panels.

Richmond’s solar energy production is projected to offset over 45,000 metric tons of greenhouse gas over the next 25 years.

Mr. Mikell initially hoped that 70 percent of Richmond’s parishes would invest and convert to solar energy, but he has become more ambitious after early successes. Now he expects that in three to five years 85 to 90 percent of the diocese will have converted to solar. Mr. Mikell said parishes are choosing to convert to solar on their own as well.

Richmond’s pastors have been impressed by the project at Immaculate Conception—the parish has saved nearly $2,500 on electricity over the past year—and are beginning to think solar energy could find a home on their roofs or parish grounds, too.

Catholic Energies negotiates a 25-year power purchase agreement for each church, so most parishes spend nothing upfront to finance their solar projects, Mr. Mikell explained. They do make regular payments to third-party investors, typically at a cost below their previous electric bill, and churches have the opportunity to buy themselves out from the finance arrangement after five years.

The pastor at Immaculate Conception, the Rev. John Grace—who led the initiative to convert the church to solar power—is known to parishioners as “Father Sunshine.” Although he welcomes the monthly savings, that was never the main goal of his project, he said.

“The first question in Scripture is Cain and Abel, when God is looking for Abel [and Cain responds]: ‘Am I my brother’s keeper?’” Father Grace said. “And we’re still wrestling with that question. The answer is ‘Yes, we are our brother’s keeper.’”

Playing that role for this parish has included seizing the opportunity to offset 133 metric tons of carbon dioxide since its conversion to solar energy began.

Related: Pollution is adding to coronavirus deaths. If we improve our air quality, we can save lives.

Yes, we are our brother’s keeper.

Now Father Grace’s example has inspired other parishes in the diocese. The Rev. John Goertz, pastor of Sacred Heart in Danville, Va., read about Immaculate Conception’s solar project in The Catholic Virginian last year. He thought replicating the effort at Sacred Heart could save money while setting an example of environmental stewardship. “What a great situation,” he said. His parish’s solar conversion should be completed by December.

Both pastors were grateful for the help of the Catholic Climate Covenant and Catholic Energies, help that makes such transitions as easy as possible for parishes. “If we were going to embark on this project alone, it would be so intimidating just to get started that we would never have had the ability to do it,” Father Goertz said. “There’s so much technical expertise that goes into this.”

Catholic Energies assesses whether switching to solar is even a viable option, looking at a community’s electrical grid capacity and the solar potential of the roof at proposed project sites. Then its team creates and reviews designs and economic models, prepares contracts with local companies and secures funding from third-party investors.

Those investors may not be interested in small projects, so Catholic Energies may bundle multiple projects together. Catholic Energies manages the project through to completion—navigating the paperwork and local regulations governing contractors, grants, tax breaks, commissions and permits from the city.

When Sacred Heart’s roof is covered in solar panels, their visibility will act as a form of public witness to the local community.

Father Goertz hopes that when Sacred Heart’s roof is covered in solar panels come December, their visibility on Danville’s Central Boulevard will act as a form of public witness to the local community. Parishioners may begin to reflect on lifestyle choices and how they use energy at home, he hopes, and other parishes and groups in the Danville area may be inspired to make the switch themselves.

Catholic parishes in the diocese “which are really on the ground...doing work in local communities” to respond to issues of poverty and justice, he argues, are well situated to be agents of change.

Changing energy practices “is one way we can do that, as well,” Father Goertz said.

Father Grace likes to cast the idea of stewardship of the earth through the lenses of giftedness, gratitude and appreciation. He urges parishioners not only to be mindful of the children in their congregation, but also to remember children all over the world, especially in nations that will experience the worst impact of climate change.

“I’m now 68, so there are less years ahead of me than behind me,” he said. “As I’ve enjoyed the world that I’ve been part of all these years, it is my responsibility to make sure those who come behind me get to enjoy it as well,” Father Grace said.

“All these little infants in my hands, in the clean waters of baptism, I look in their faces—and what kind of world am I trying to help them to live in? So they have their time to live life and discover the wonderful nature of God.”