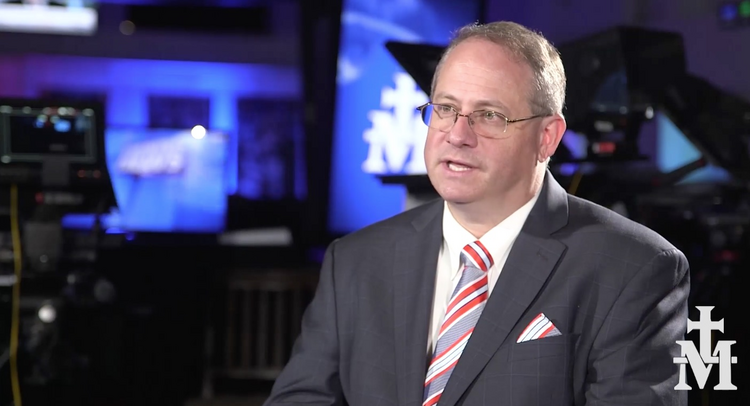 WASHINGTON (RNS) — The head of the Federal Election Commission chastised Catholic bishops during a pair of interviews this week, accusing church hierarchy of "hiding behind" their nonprofit status and declaring that this year's U.S. election amounts to a "spiritual war" that threatens the country's "Christian moral principles."

FEC Chairman James E. "Trey" Trainor III made the remarks during an interview released on Wednesday (Sept. 16) by Church Militant, a controversial Catholic media outlet, and in a separate phone interview with Religion News Service.

Trainor, who is Catholic and attends Mass weekly, was asked by Church Militant founder Michael Voris about a priest who recently published a viral video in which the cleric declares that no Catholic can be a Democrat. Voris pressed Trainor about news that, in response to the video, a bishop plans to attempt "fraternal correction " of the priest, with the hierarch arguing the priest has inflicted a "wound" upon the church.

"I don't think a bishop has the right to tell a priest that they can't come out and speak," the FEC chairman said.

Trainor suggested the bishops avoid political matters because they, like many faith-based groups that offer social services, receive funds from the federal government. He described the arrangement as "almost a payoff" by the government to encourage faith groups to stay silent or neutral.

When RNS followed up with the chairman to ask whether he believed Catholic bishops shy away from endorsing candidates because of financial ties with the federal government, he responded, "I do — I believe that to be the case."

The U.S. Conference of Catholic Bishops declined to comment on Trainor's remarks.

Trainor, a Republican who was nominated to the FEC by President Donald Trump and confirmed by the U.S. Senate in May 2020, also told Voris that because of a 2017 executive order signed by Trump, churches are free to endorse political candidates.

"Especially with this executive order that President Trump signed, the churches can absolutely engage in that activity," said Trainor, a lawyer who previously represented the Texas Republican Party and two presidential campaigns.

"The bishops are using their nonprofit status as a shield to hide behind from having to make a decision about who to support, and to come out publicly. … (Bishops) say we should have an informed conscience when we go vote. But they never really take that next step and say, 'Here's who meets the criteria.'"

"My colleague is not correct," Weintraub, a Democrat who has chaired the commission three times since joining it in 2002, told RNS in a statement.

"Though the president's executive order directs law enforcement authorities to not enforce the Johnson Amendment, that statute remains the law of the land and cannot be undone with an executive order. Anyone tempted to violate the statute should keep in mind that a future administration could well decide to enforce the law as Congress wrote it," she said.

Trump himself claimed at a 2019 National Day of Prayer service that his executive order "got rid of" the Johnson Amendment. But in his interview with RNS, Trainor clarified that his remarks to Church Militant were meant to highlight the reality that the law is likely to be unenforced.

He pointed to examples of when church leaders have gotten political, such as when Cardinal Joseph Tobin of Newark, New Jersey, remarked earlier this week that "I think that a person in good conscience could vote for Mr. [Joe] Biden." Tobin then added, "I, frankly, in my own way of thinking have a more difficult time with the other option."

Tobin has since insisted his remark was not an endorsement, but Trainor argued otherwise, saying it's "fantastic" that a cardinal would publicly back a candidate.

"Unless the pope is going to come down and fraternally correct Cardinal Tobin, I absolutely don't see a difference," he said.

Trainor contended the separation of church and state is "a fallacy," because "every person who comes to the public square has to have an informed conscience in one way or another, and it's either informed by their religion, their tradition or something."

The chairman also agreed with Voris that this year's election amounts to a "spiritual war." Trainor expanded on that position in his interview with RNS.

"It was [John] Adams that said the Constitution presupposes a Christian moral people, which means you have to have that underlying principle in order for the Constitution to function and work properly," Trainor said.

"What we see going on around the country is complete anarchy in places where the rule of law has been completely abrogated. So it is a spiritual war in that it is striking at the underlying foundations of our constitutional republic. It's getting rid of the Christian moral principles that are the basis of the foundation of the country" he said.

The origin of the quotation Trainor attributed to Adams was not immediately clear. Although the second president of the United States did declare in a 1798 speech that "Our Constitution was made only for a moral and religious People," he did not stipulate that religious people must be Christian.

"Our elections are not spiritual wars," she said. "They are not wars at all. Wars have enemies; elections have opponents. We're all Americans and we're all in this together."

She added: "Regarding the separation of church and state, rather than misquoting John Adams' Oct. 11, 1798, letter to the Massachusetts Militia, a better measure of the founders' views can be taken from the Senate's ratifying and President Adams' signing, the year before, of the Treaty with Tripoli, which stated that 'the Government of the United States of America is not, in any sense, founded on the Christian religion.'"

Trainor invoked the idea of a Christian nation in his conversation with Voris as well, during which he encouraged lay Catholics to discuss with fellow parishioners during Mass whom they should vote for.

"I think that would go a long way toward moving the country back toward a Christian moral foundation," he said in the interview.

When RNS asked Trainor whether he believed the U.S. should be a Christian nation, the chairman clarified that "obviously the country is open to all faiths."

Trainor insisted to Voris that he was speaking "privately" and not as FEC chairman, but answered several questions about the upcoming election. For example, he said he does not expect a protracted legal debate similar to what occurred in the 2000 election, saying, "I don't think that this election is going to be that close."

Trainor later clarified with RNS that he expected the winner of the presidential election to win by a significant margin, but did not know which candidate would claim victory.

During the Voris interview, Trainor also said that mass distribution of mail-in ballots, which allows people to avoid going to the polls out of fear of potential infection from COVID-19, will lead to "mass confusion."

"The entire planet has been in a pretty high state of confusion since March or so," she said. "Election officials throughout the country, both Republicans and Democrats, are working hard to provide the best, most accurate, and safest elections possible in this challenging and confusing year. One tool they are using to prevent a chaotic election is expanding opportunities to vote by mail."

Provide feedback on this article
Join the conversation: Login or create an account
Before you can comment, you need to update your profile to include your first and last name, as required in our comments policy. Then reload this page and you'll be set up for commenting. Update your profile
More: US Church / US Politics / Donald Trump